In the US, Model Year (MY) 2018 vehicle fuel economy was 25.1 miles per gallon, 0.8% higher than the 24.9 miles per gallon MY 2017, according to the annual Automotive Trends Report released by the US Environmental Protection Agency (EPA). In model year 2018, the average estimated real-world CO2 emission rate for all new vehicles fell by 4 grams per mile (g/mi) to 353 g/mi, the lowest level measured since 1975, when EPA data collection began. 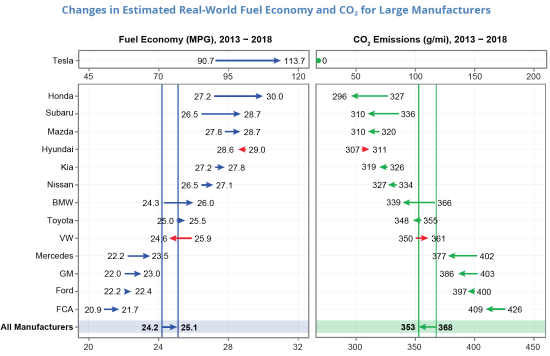 The report shows only manufacturers that produced more than 150,000 vehicles in the last model year; Tesla cross that threshold, and is included with the 13 manufacturers from last year’s report.

Tesla, with its EVs, had by far the lowest tailpipe CO2 emissions—i.e., 0 g/mi—and highest fuel economy, at 113.7 mpge, of all large manufacturers in model year 2018.

Other highlights from the report include:

It's long past time to get rid of footprint-based standards in the US and kill this guzzler craze.  We need to replace it with ceilings on liquid fuel consumption for the first X miles traveled.  People will still be able to get their monster vehicles, but they're going to have to shell out for batteries to offset fuel from the pump.

Give each adult in the USA and EU a carbon ration and see what happens.
They could be tradeable.
Apply it to cars, flights, gas + electricity for domestic use.

Over time, you could reduce it.
It would take a bit of doing, but I bet the Chinese could do it.

I'd like to know if the mpg savings per company were due to the use of batteries (in any format) or if the mpg improved due to a more efficient engine/reduced weight/better drag/etc.