Researchers at S. Korea’s Ulsan National Institute of Science and Technology (UNIST) have developed a novel process for the production of hydrogen using various types of biomass, including lignin, as an efficient alternative to water oxidation as an electron source.

In a paper published in the journal ACS Catalysis, the researchers report that this approach allows efficient (photo)electrochemical production of hydrogen with a Faradaic efficiency close to unity at acidic pHs and brings additional economic benefits from by-products. 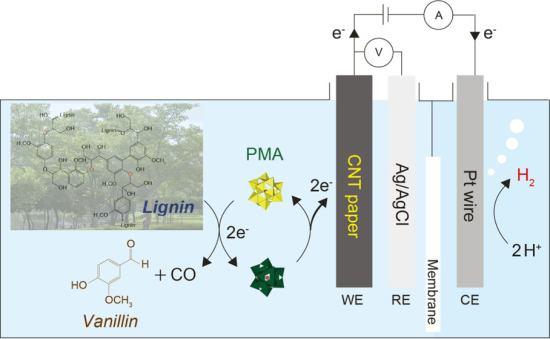 In principle, it is possible to produce valuable chemicals such as hydrogen, syngas, hydrocarbons, and alcohols through electrochemical processes using electricity from renewable energy resources. Regardless of final products, it is necessary to extract electrons via oxidation of sacrificial chemicals for the reductive synthesis of the aforementioned chemicals. Conventionally, water is considered a cheap and clean source of electrons; 2H2O → O2+4H+ +4e-, Eo = 1.23V vs. reversible hydrogen electrode (RHE).

However, efficient oxidation of water or oxygen evolution reaction (OER) is a still challenging task due to slow kinetics originating from its four-electron transfer process. Despite numerous reports on the development of OER catalysts, there remain limitations such as the use of expensive elements (e.g., Pt, Ru, and Ir), high overpotential (e.g., higher than 1.5 to 1.6 V vs. RHE at 10 mA cm-2), and low stability of electrodes and catalysts, especially at acid pHs.

In this regard, researchers have also explored alternative electron sources. … In this study, we report that electrons can be readily extracted from various types of biomasses through oxidative depolymerization with phosphomolybdic acids (PMA) at a bias much lower than 1.23V. PMA can act as an electron mediator and a catalyst for biomass depolymerization. Briefly, PMA can be readily reduced at room temperature upon oxidation of abundant biomass wastes, such as lignin and chopped particles of giant miscanthus, acacia, rice straw and larch. We have particularly focused on lignin as an electron source because it has a low utility despite its abundance and high application potential due to difficulties in selective depolymerization.

The UNIST system decomposes lignin with a molybdenum (Mo) catalyst to produce high value-added compounds, and the electrons extracted in the process effectively produce hydrogen. The new device has been designed to move electrons from lignin, along the wire to the electrode where the hydrogen evolution reaction (HER) occurs.

With this new system, we can produce hydrogen with less energy (overvoltage) than conventional water electrolysis, as there is no need for oxygen reactions, requiring high energy and precious metal catalysts. Conventional methods require more than 1.5 volts, but the new system was capable of producing hydrogen at a much lower potential (0.95 volts).

In addition, vanillin or carbon monoxide (CO), which are produced via lignin breakdown are very useful substances for various industrial processes.

The new biofuel system is a technology that produces hydrogen and valuable chemicals using cheap catalysts and low voltages instead of expensive catalysts such as platinum (Pt). Our work is significant, as it presents a new way to replace oxygen-producing reactions in the electrolysis of water.

I've never been a great fan of biomass energy production, due to impact on resources, in particular water and so on.
It was ethenol from corn which led to my suspicious attitude.

It seems new methods at any rate in the great forested lands of the north are starting to alter the equation however.

Here is another techcnology due to open in Quebec:
https://www.globenewswire.com/news-release/2020/01/21/1973260/0/en/Green-Hydrogen-H2-V-Energies-takes-another-step-forward-and-announces-the-opening-of-its-order-book.html

'As of today, the Québec based company H2 V Energies is accepting orders for green hydrogen, i.e., decarbonated, traceable hydrogen in gaseous form and up to 99.8% pure, which will be delivered compressed at 300, 500 or 950 bars starting in 2022. The start-up company is thus launching a continental plan for its deployment. The price of this green hydrogen will be CAN$3.50 (US$2.67 in U.S. currency as of January 21, 2020) per kilogram, plus taxes, deployment and delivery charges extra: a most affordable price, less expensive than diesel fuel and defying all competition. Transport will be carried out by tankers operating on green H2.
.................................
he plant will convert waste wood, bark and paper into syngas and then turn it into green hydrogen. Compared to the concept of water electrolysis, the new industrial plasma process:

Will consume 4 to 6 times less electricity per kg of green hydrogen produced, reducing the load on the electrical grid;
Reduce CO2 emissions to the atmosphere resulting from the decomposition of residues causing methane emanations in Québec forests (greenhouse gas 25x that of CO2).
Recovers water from the biomass by distillation, thus producing more water than it consumes;
Better suited for large-scale green H2 production than electrolysis.
H2 V Energies will become a major player in the production of decarbonated hydrogen, and close to 49,000 tons will be produced annually with the opening of this plant. '

Heh, someone finally got a clue that it's much cheaper energy-wise to start with fixed carbon than to try to split water.

If we make ethanol from cellulose we can use the lignin for more fuels.

@Dave,
That sounds very cheap - H2 seems to cost about $13.99 / kg, but you need to get it delivered which will cost quite a bit, and it is hard to store.
Question then is - is it cheaper than H2 from steam reforming ?
And if so, what do you use it for ?
Fuel cell cars ?
H2 ICEs
mix it into the nat gas supply ?
Use it to crack heavy oil?

I suppose, if it gets very cheap, we'll find lots to use it for.

It makes no sense to use the prices at the pump for tiny volumes of hydrogen delivered for a couple of thousand vehicles as an indicator of prices for volume delivery in mass production.

How would the hydrogen be delivered?

In the UK and Germany, by admixture in the NG network, at up to 20%, with trials now underway.

What do you use it for, apart from FCEV cars?

In China and Norway, they are rolling out hydrogen distribution for heavy goods vehicles.

I could provide links to all of these, but you really need to have a bit of a look around yourself, as hydrogen is integral to all the efforts around the world to decarbonise.

I should have added that hydrogen is also good for decarbonised:

You can find examples and early stage work in all of these areas, sometimes as in steel making, trains and buses at fairly substantial scale.