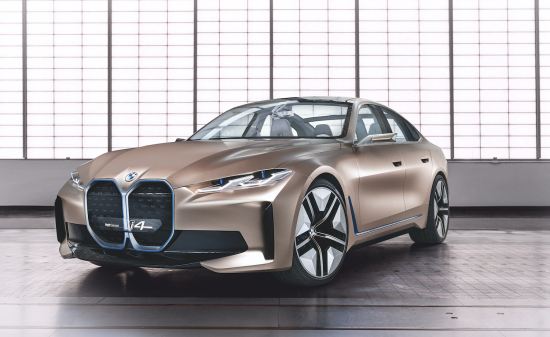 The electric four-door BMW Gran Coupé offers an electric range of up to 600 kilometers (373 miles), based on the new WLTP test cycle. Powered by fifth-generation BMW eDrive technology, the i4 has a very slim battery with optimum energy density.

The development and production of the e-drive is done in-house, as well as the battery cell research. The e-drive offers a thrilling peak performance of up to 530 horsepower. And, we will not use any rare earths in the electric motor.

All of this shows that we are fully committed to climate protection. I can assure you and our customers: We will fulfill the tough European CO2 regulations for 2020 and 2021. This year alone, we will reduce our European fleet target by around 20 percent.

—Oliver Zipse, Chairman of the Board of Management of BMW AG

The electric motor developed for the BMW i4 generates maximum output of up to 390 kW/530 hp, which ranks it alongside a current BMW V8 combustion engine. Its instantaneous power delivery gives the BMW i4 standout performance attributes and exceptional efficiency. 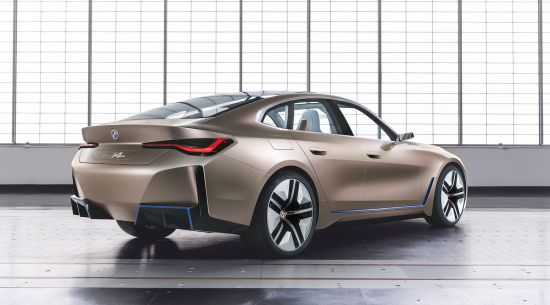 The fifth generation of BMW eDrive also brings a newly designed high-voltage battery. The version of the battery developed for the BMW i4 features an extremely slim construction and optimized energy density. It weighs roughly 550 kilograms, and has an energy content of around 80 kWh.

Production. Series production of the new BMW i4 will begin in 2021 at the BMW Group’s main plant in Munich. This means that, in the future, combustion-engined vehicles, plug-in hybrids and all-electric vehicles will be manufactured on the same assembly line in Munich.

The body concept of the BMW i4 differs from the architectures of the vehicle models produced at the plant to date due to the need to accommodate its high-voltage battery. Approximately 90% of the existing production equipment in the body shop can be incorporated into the process, i.e. adapted to manufacture of the i4. However, the remaining 10%—especially the machinery involved in building the rear structure—will need to be newly built.

Working within these tight confines, old machinery will have to be removed and new equipment installed and brought on stream within a six-week period. The company is investing a total of around €200 million in Plant Munich to bring series production of the BMW i4 to fruition.

The story of ever increasing energy density and falling costs is wearing ever thinner as time goes on.

The 24KWh Nissan Leaf battery pack, circa 2013, came in at around 140Wh/kg:
http://www.electricvehiclewiki.com/wiki/battery-specs/

That's progress for you.

Lots of people say it is just around the corner and has been for a decade
Let's get real on the projections, we may be much less disappointed.

If they got real on projections of energy density and cost, which are also approaching static, as Hyundai say, then subsidies for the 'coming thing' would stop.

Throwing dust in everyone's eyes has worked so far, so they are not about to stop now.

This is actually the first time I have run numbers for the long term, and there appears to have been virtually no movement in energy density for the last 7 years.

They did a brillant job of obscuring that , with constant talk of ever varying metrics showing improvement.

Steadily falling battery prices, at both cell and pack level, are a historical fact.

GM just announced that their collaboration with LG Chem will push prices under $100/kWh.

Both 24M and Oxis have demonstrated batteries with 350 W/kg.

Cars with a plug give consumers access to $0.03 mile transportation. That’s a market reality today.