In addition to the European car market recording tepid growth in 2019, CO2 emissions have continued to increase, despite new regulation designed to curtail this, according to JATO Dynamics. Last year, the volume-weighted average CO2 emissions for European markets were at their highest recorded levels since 2014. According to data from JATO Dynamics, the average for the 23 European markets totalled 121.8 g/km under the NEDC regime—the third such annual increase in a row.

As expected, the combination of fewer diesel registrations and more SUVs continued to have an impact on emissions. We don’t anticipate any change to this trend in the mid-term, indeed these results further highlight the industry’s need to adopt EVs at a rapid pace to reach emissions targets.

Despite an increase of EV models contributing positively to emission levels, the move away from diesel had a negative impact, one that the market could not offset.

The average emissions of electrified vehicles, was 63.2 g/km, almost half that produced by diesel and petrol vehicles. The problem arose because EVs only accounted for 6% of total registrations, which is not yet a high enough figure to create a positive change.

Four of the five major markets in Europe posted higher averages in 2019 than in 2018. Average emissions for Germany, Britain, Italy, and Spain increased, ranging from a rise of 0.8 g/km for Germany to an increase of 3.0 g/km for Italy. This was in part caused by marked changes in attitude and regulations around the use of diesel fuels which has had the unintended consequence of pushing people to drive higher-CO2-emitting gasoline vehicles.

France was the only market to see better results, as its average fell from 112.0 g/km in 2018 to 111.1 g/km last year. Despite this positive change, their emission levels were still higher than the averages they recorded in 2016 and 2017. 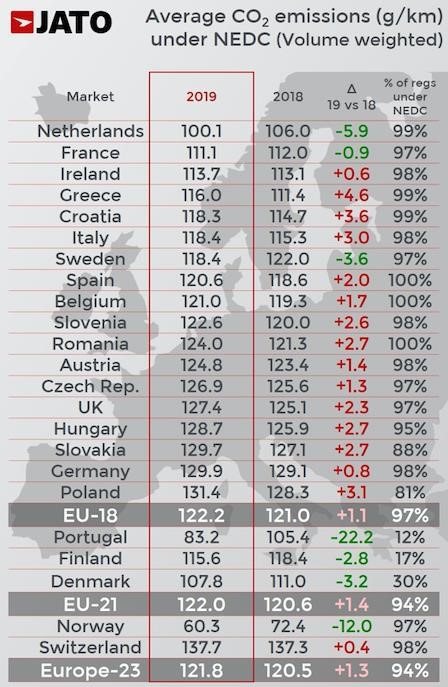 Pure electric cars have a 2% market share in France, this being the highest share among all five major markets. France is therefore leading the way in showing how electric cars can have a measurable impact on emissions levels, despite their adoption still lagging behind diesel and gasoline counterparts.

France has seen this higher level of market penetration in part due to the adoption of more affordable cars such as the Renault Zoe, which is soon to be followed by the Peugeot 208-e.

Neither the Germans nor the Italians offer pure electric subcompacts within their product line up. These cars can make a huge difference to consumer attitude.

The other markets recording large improvements in emissions levels were Sweden and the Netherlands. The latter reduced its average by 5.9 g/km, in turn becoming the country with the lowest result in the European Union (this excludes Denmark, Portugal and Finland who can’t be compared to other markets as they published WLTP data rather than NEDC values).

The improvement was due to their mix between diesel and pure electric cars. In 2018, for every BEV registered there were 2.3 diesel new cars in the Netherlands; one year later this changed significantly to 1.9 BEVs for every diesel car registered.

Toyota holds its position as the top 20 best-selling brand with the lowest average CO2 emissions in Europe. Alongside this, the Japanese manufacturer also saw the largest decrease since 2018, with its average falling by 2.3 g/km. Toyota’s success is largely based on its popular hybrid range, with registrations making up 60% of the brand total volume in 2019.

Toyota is a pertinent case, particularly considering they don’t offer pure electric cars but are still ahead of their European peers who still have more electrification plans than actual products.

In the group ranking, Toyota was a major leader, only behind Tesla. Along with Lexus brand, Toyota posted an average of 99.0 g/km of CO2 in 2019, 14.3 g/km less than the next best in the ranking, PSA. At group level, Nissan Group, Renault Group, Mitsubishi and Suzuki posted average emissions lower than the total market’s average of 121.8 g/km. Volkswagen Group, Europe’s largest maker, recorded an average of 123.6 g/km. 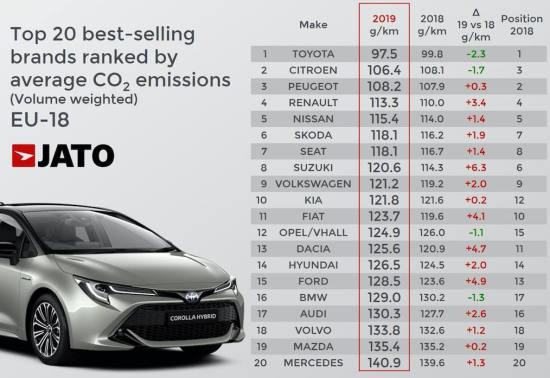 Citroen’s position in the ranking is also noteworthy. It was the brand with the second-lowest average emissions and was the second-best performer. However, in contrast to Toyota, the improvement made was due to the efficiency of its gasoline engines, rather than the adoption of electrified ones. The arrival of the compact SUV C5 Aircross and its higher averages, was outshone by improvements in the gasoline engines of the C3 (-5.1 g/km), C3 Aircross (-4.7), C1 (-4.5).

SUVs were the biggest driver of growth in terms of volume and profits for European markets last year. Thanks to their popularity and their shared development costs with traditional cars, many OEMs have been able to increase their sales and increase profit margins. However, the popularity of SUVs is having a negative impact on the average emission levels, and this is evident in the average CO2 emissions when analyzed by segment.

The SUV segment of the market urgently needs more electrified models. To date, the focus for EVs has been on traditional hatchbacks and sedans, leaving very few choices in the SUV market. If these vehicles want to keep gaining traction and avoid future sanctions, they need to be electrified.

There is a documentary called Dirty Money that tells about the VW diesel cheating. Europe has standards, but not every country enforces them.