The Audi e-tron and the Audi e-tron Sportback EVs are becoming more agile, sharper and more dynamic as S models. Three electric motors, two of which are located on the rear axle, together provide 370 kW of boost power and 973 N·m (717.6 lb-ft) of torque. 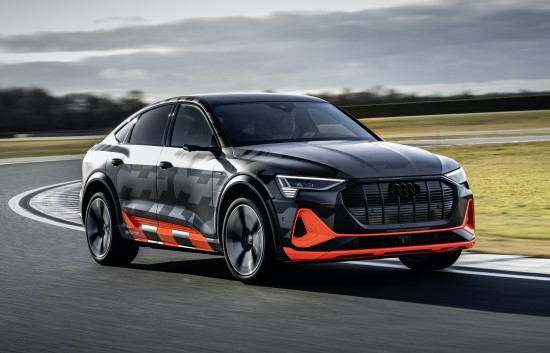 This allows the two purely electrically driven models to accelerate to 100 km/h (62.1 mph) in 4.5 seconds. The intelligent drive control raises vehicle safety and dynamic handling to a new level—in addition to the electric all-wheel drive, there is the electric torque vectoring with active and fully variable torque distribution on the rear axle. 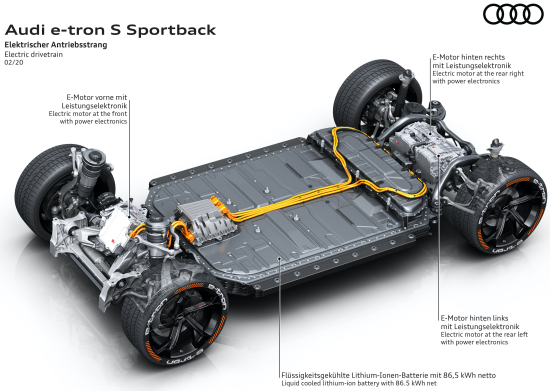 Drive layout: three motors. The new Audi e-tron S models will be the first electric cars worldwide with three motors in mass production. Their drive layout is based on the concept with two different asynchronous motors (ASM); the e-tron product line was designed in modular form in line with this from the start. 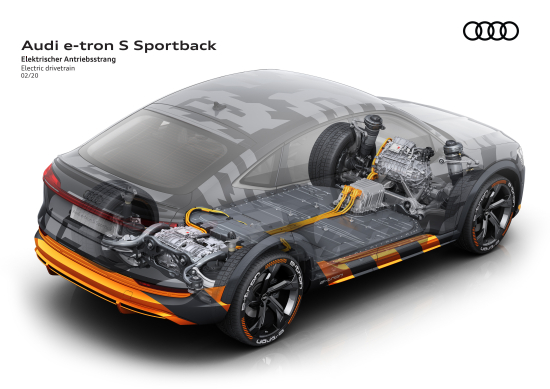 The smaller electric motor now works in a modified form in the rear, together with a counterpart that is identical in design; together, they offer 196 kW of power, or 264 kW in the boost. 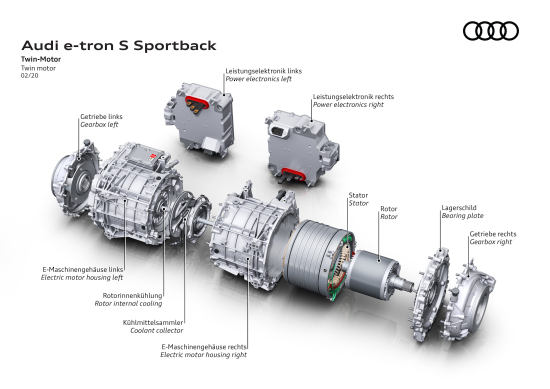 The drive has been programmed for efficiency in everyday life; in normal driving mode, only the rear electric motors work. The front drive is unpowered but switches itself on—with the driver barely noticing—if the driver needs more power. It also switches on predictively if the grip declines. It does so when friction values are low and during rapid cornering. 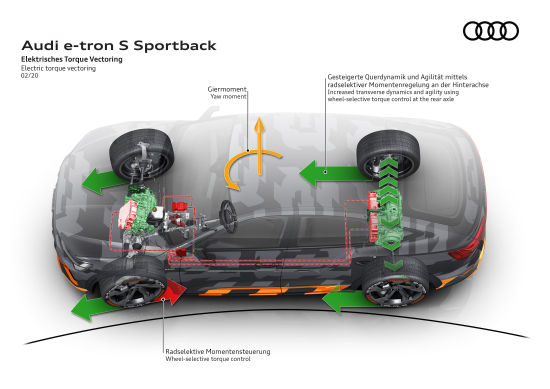 Each one of the rear electric motors sends the drive forces directly to the wheel via a transmission; there is no longer a mechanical differential. 40 years following the launch of quattro technology, Audi is thus raising the principle of the four powered wheels to a completely new level of technology. The result is more agile driving and self-steering characteristics, and thus a higher cornering speed.

One further advantage is the traction. If, during acceleration, a rear wheel comes into contact with a road surface with a low friction value, i.e. if the road surface is covered in black ice or has a loose subsurface, the moment can be distributed precisely and quickly between the two motors. The full moment is gradually distributed to the wheel with powerful traction, while the wheel with low traction continues moving with almost no moment.

The two prototypes of the e-tron S models drive on 20-inch alloy wheels in the 5-V-spokeS design as standard. Different wheels up to 22 inches in size are available on request. To achieve an S-typical transverse dynamism, the tire widths in the sizes 20 inches, 21 inches and 22 inches have all been enlarged to 285 mm (11.2 in).

Black brake calipers with a red S rhombus, with six pistons at the front in each case, grip the large brake discs (front diameter: 400 mm (15.7 in)). A further standard feature is the sporty progressive steering—its ratio becomes more and more direct, the further the driver turns the steering wheel. The front and rear axles have been created as a five-link design. Harmonization of the elastokinematics and of the dampers has also been optimized for the S models. In order to even further reduce the rolling movements during cornering, the stabilizers on both axles have been enlarged.

When the driver is on the road, the electric S models can be charged with up to 150 kW of direct current power (HPC), such as in the European Ionity network. This means that charging from 5 to 80% only takes around half an hour. An important factor for this is the elaborate thermal management system with a standard heat pump, which cools and heats the battery, the interior and the electric motors with four circuits. In addition, the Audi models will also be able to charge with up to 11 kW of alternating current (AC).

The Audi e-tron Charging Service guarantees convenient access to more than 140,000 public charging points in 24 European countries on request—with nothing more than a charging card. In the first year, Audi covers the basic fee for the transit rate, which also offers access to high power charging columns.