US plug-in electric vehicle sales decline in 2019 due to softer PHEV sales; ~2% of market

Sales of all-electric vehicles remained steady with a slight increase of about 3,000 more vehicles sold than in 2018. Total plug-in vehicle sales in 2019 were nearly 326,000, or almost 2% of the nearly 17 million vehicles sold that year. 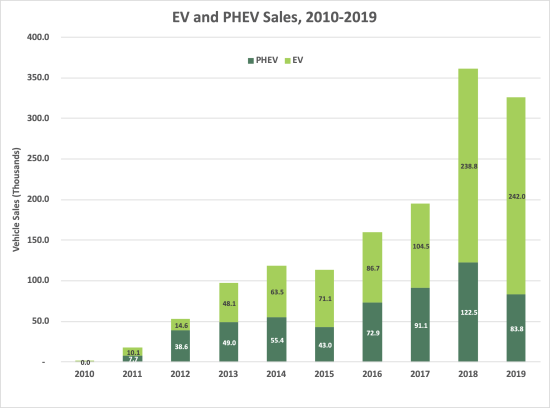 Pretty far from a success story... :)

YOY sales is a sawtooth, like almost every other growth curve. Zoom in, and any given time period can look great or ugly. Zoom out, and the long term is revealed.

When that trend is a J curve, looking back a year or two tells you very little about what growth the next few years will look like in absolute numbers unless you know in advance it’s a J curve.

Looking at some of the new models on the horizon, things are just about to get exciting.

You can only sell a limited number of cars to "green addicts".

One need look no further than the characterization of someone who wants a non polluting car as an “addict” to understand the credibility of that source.

Tavares is on the wrong side of history. Actually, it’s more likely he’ll simply be forgotten.

Current PHEV designs are inferior in acceleration and cornering, as well as internal space, in comparison to Tesla's Model 3, therefore aren't not selling well. GM has discontinued the Volt, and Honda has really limited the availability of the Clarity PHEV.
To compete with BEV from Tesla's Model 3 and Model Y, a new clean-sheet-design PHEV must have comparable acceleration and internal space. This is a tall order to fill.
1. Let's start by imagining a liftback PHEV having 15-kWh battery pack capable of 180-hp output to the motor, and a 3-cylinder 1-liter turbocharged engine capable of 130 hp, for a total of 310 hp, in a mid-size vehicle with 3,400 lbs curb weight for plenty of acceleration.
2.. The battery pack will be mounted on the floor of the vehicle to preserve trunk space and to lower the center of gravity for cornering performance.
3. The engine will be mounted in the front, driving a mechanical CVT, while the e-motor will be mounted in the rear axle, for 4-WD capability.
This is not hard to do, yet car makers keep resist making compelling PHEV's in order to compete with Tesla.