This is my latest update on the recent changes in the number of registered vehicles in the United States. In the previous analysis, I examined the data from 1984 through 2017. This analysis adds new calculations for 2018. The focus in this series is on vehicles per person, as opposed to total number of vehicles (which depends, in part, on the continuously increasing size of the U.S. population).

The calculations used the total numbers of light-duty vehicles (cars and light trucks) from the Federal Highway Administration and the resident populations from ProQuest. (Several of the latter values were recently updated.) The chart below shows the results. 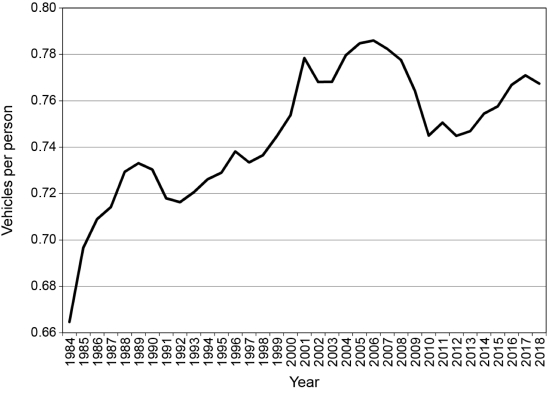 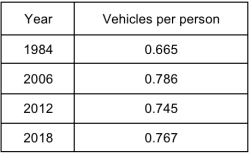 Many households have more than one car, especially in the USA.
If one of those cars was an EV, even a short range one like a Gen 1 Leaf, it would be a very good thing.
If you have access to an ICE vehicle as well as an EV, you shouldn't have any range problems.
The insurance companies should be able to work out a way of having a floating policy that covers two cars, one at a time, to keep down the costs of dual car ownership.
What I call a "dual car PHEV" solution.
You could also use a neighbour's car as the ICE, but once you involve other people, things can get legal and complicated.

We don't need 200 million cars for 200 million adults if we have ride
sharing and transit. Car pools are a good idea to save energy and money.

How much of this is driven by demographics? What are the number of vehicles per licensed driver?

Toyota has some very useful hybrids. If they offered a complete "commuter package" as an LLC for four people including lease/insurance/factory maintenance . Then