Commercial fast-charging stations subject electric car batteries to high temperatures and high resistance that can cause them to crack, leak, and lose their storage capacity, according to researchers at the University of California, Riverside (UCR) in a new open-access study published in the journal Energy Storage. To remedy this, the researchers have developed a method for charging at lower temperatures with less risk of catastrophic damage and loss of storage capacity.

Mihri Ozkan, a professor of electrical and computer engineering and Cengiz Ozkan, a professor of mechanical engineering in the Marlan and Rosemary Bourns College of Engineering, led a group that charged one set of discharged Panasonic NCR 18650B cylindrical lithium-ion batteries, found in Tesla cars, using the same industry fast-charging method as fast chargers found along freeways. 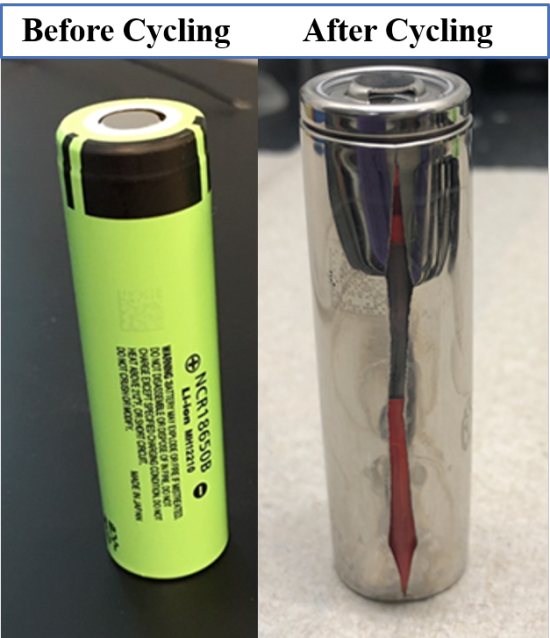 An electric car battery before and after industry standard fast charging. (Ozkan Lab/UCR) 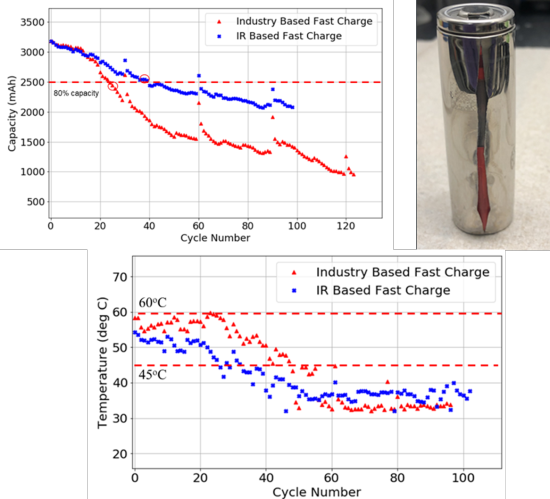 At 80% capacity, rechargeable lithium-ion batteries have reached the end of their use life for most purposes. Batteries charged using the industry fast-charging method reached this point after 25 charging cycles, while internal resistance method batteries were good for 36 cycles.

Worse, after 60 charging cycles, the industry method battery cases cracked, exposing the electrodes and electrolyte to air and increasing the risk of fire or explosion. High temperatures of 60 degrees Celsius/140 degrees Fahrenheit accelerated both the damage and risk.

Capacity loss, internal chemical and mechanical damage, and the high heat for each battery are major safety concerns, especially considering there are 7,104 lithium-ion batteries in a Tesla Model S and 4,416 in a Tesla Model 3.

Internal resistance charging resulted in much lower temperatures and no damage.

The researchers have applied for a patent on the adaptive internal resistance fast-charging algorithm that could be licensed by battery and car manufacturers. In the meantime, the UC Riverside Battery Team recommends minimizing the use of commercial fast chargers, recharging before the battery is completely drained, and preventing overcharging.

Wow - 25 cycles in a fast charger to 80%, I thought they were good for 1000 cycles ...
Even if they get to 36 cycles, it does not bode well.
Or am I missing something?
Since this is already happening, why do we not see more trouble?

The Tesloop model x that was recently sold and was the subject of a blog on Jalopnik had 317,000 miles on its original battery after about 2 years of service so that works out to about 435 miles per day (317,000/730). I would guess that this vehicle received way more than 50 fast charges so it seems that something in Tesla's battery management system is able to mitigate the degradation demonstrated in these tests.

It states that the researchers started with completely flat/discharged batteries then charged them fully using a fast charger.

We all know that you should not let your EV battery completely discharge, now we have it quantified why we should not.

EV batteries have a long development to go through before they become really suitable for the majority of road users.

We all knew fast charging reduces battery life and this system does not solve the problem since all it does is stop charging as the internal resistance rises to let the resistance fall again - which is going to slow down the charging rate! Well anyone could have worked that one out. As for the Model X referred to above with 317k on the clock, without a complete teardown and inspection of the battery we have no idea what condition it was in. There's no magic solution to the battery conundrum.