In addition, the BMW Points loyalty program will be introduced later in the year, with which drivers of BMW plug-in hybrid models will be rewarded with attractive premiums via a point system. Every electrically driven kilometer counts, and within an eDrive Zone, twice as many points can be collected. By collecting a sufficient number of points, participants can gain access to rewards such as free charging volumes on BMW Charging. 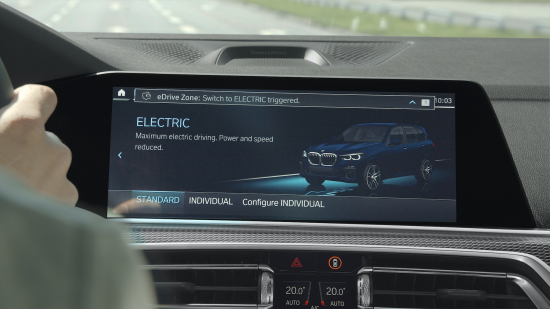 The development of the BMW eDrive Zones service is based on a BMW Group pilot project in the Dutch port city of Rotterdam. There, 50 drivers of plug-in hybrid models were given access to the GPS coordinates of defined inner city areas via a dedicated app. When entering this area the drivers were asked to change to the purely electric driving mode MAX eDrive. After only a few months, it was already apparent that the drivers involved in the pilot project had covered around 90% of all routes within the Rotterdam eDrive Zone in purely electric mode.

The BMW eDrive Zones service, now standard in various BMW plug-in hybrid models, uses geo-fencing technology via GPS. Switching to the purely electric driving mode is automatic. When the service is activated, each available eDrive Zone on the navigation map is graphically highlighted in the Control Display. There you will also see a notice that the vehicle automatically switches to ELECTRIC mode as soon as it reaches an eDrive zone. The plug-in hybrid vehicle is locally emission-free for as long as the charge level of the high-voltage battery allows within the eDrive zone. If the energy reserves run out, the activation of the combustion engine is also shown in the Control Display.

The benefits of the digital BMW eDrive Zone service can be experienced in a large number of major European cities and their low emission zones from the very beginning. All current 58 cities and regions in Germany that have already defined a low emission zone were taken into account. Besides that, there are 20 other core areas of major cities in Austria, Switzerland, the Netherlands, Belgium and France. The list will be expanded in the future to include additional countries and cities, so that the electric driving shares of plug-in hybrid models can be increased in a steadily growing number of city areas.