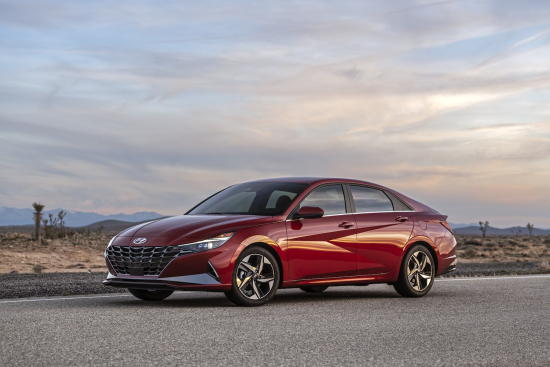 The first Elantra Hybrid to be brought to market offers more than an EPA-estimated 50 mpg combined cycle.

While some manufacturers no longer see the value in the car side of the business, we’re doubling down by offering an all-new model with both gas and hybrid powertrains. We’ve sold more than 3.4 million Elantras here in the U.S. and more than 13.8 million worldwide, and the new, captivating look is going to bring excitement to a whole new generation of buyers. Then once inside, they’re going to love all of the progressive features.

To transform the 2021 Elantra into its new four-door-coupe look, Hyundai engineers and designers had to make it longer, lower, and wider compared to the sixth-generation model. The 2021 Elantra gains 2.2 inches in overall length and 0.8 inch in its wheelbase, and the overall width is increased one inch. The overall height also dropped 0.8 inch, and the front cowl point was moved back almost two inches. These minor changes dramatically changed the shape of the car but had limited impact on cabin space. In fact, most key interior dimensions increased.

The 1.6-liter GDI engine combined with the electric motor in Elantra Hybrid delivers a total system output of 139 horsepower and up to 195 lb-ft (264 N·m) of torque. This engine mates with Hyundai’s quick-shifting, six-speed, dual-clutch transmission.

The high-efficiency electric motor has an electric-only driving mode that delivers instantaneous torque at low speeds, with available power-assist at higher vehicle speeds.

Engine performance. The Elantra SE, SEL, and Limited offer the 2.0L MPI Atkinson Cycle engine that also has a focus on fuel economy. This engine generates 147 horsepower @ 6,200 RPM and 132 lb-ft (132 N·m) of torque @ 4,500 RPM. These models are projected to achieve a best-in-class EPA combined fuel economy rating, an improvement over previous models, due in part to an Intelligent Variable Transmission (IVT).

Hyundai’s IVT provides superior efficiency and simulates gear shifts like those in the automatic transmissions that customers are used to. This transmission performs continuous shifts by the modulating pressure of the transmission’s pulley, depending on driving conditions and driver inputs. It uses a wide-ratio pulley system, which provides a broader ratio of operation compared with its competitors. This allows for improved fuel economy at higher gear ratios and improved performance at lower ratios.

As opposed to a more common push belt, the IVT takes advantage of a chain-design belt that improves fuel efficiency by an additional 1.2 percent compared with conventional belt systems.

Third-generation compact-sized K3 vehicle platform. Hyundai’s third-generation vehicle platform enhances the overall design, safety, efficiency, power and driving performance of the 2021 Elantra. The new Elantra weighs less, has better fuel economy and is stronger compared to the previous generation, thanks to the new platform. This platform also allowed engineers to lower Elantra’s center of gravity for more agile handling. In the event of a collision, this platform improves safety because it uses a multiload path structure.