BMW Group plans > €30B on future-oriented technologies up to 2025; all-electric 7 Series model coming

The BMW Group plans to invest more than €30 billion up to 2025 in research and development to underscore its position as an innovation leader, said Oliver Zipse, Chairman of the Board of Management of BMW AG, at the company’s Annual Accounts Press Conference in Munich. 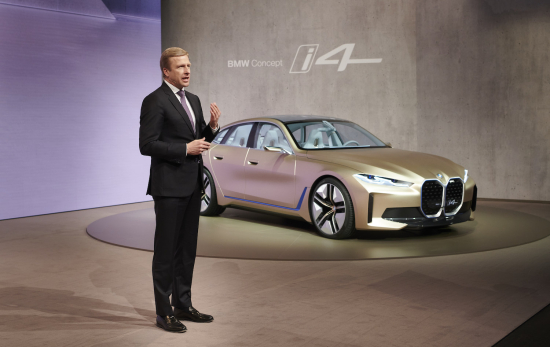 Oliver Zipse, Chairman of the Board of Management of BMW AG, and the Concept i4.

This also expresses our confidence for the future business development. The ability to integrate diverse technologies to form a complete system is vitally important. Those companies capable of developing and combining hardware and software in equal measure will shape the future of the automobile. In this respect, we are quite clearly in the fast lane.

To compensate for the high upfront expenditure on forward-looking technologies, the BMW Group will continue to work systematically on achieving continual efficiency improvements as part of the Performance > NEXT program.

We have set ourselves clear targets for 2020. High priority will be given to profitability and free cash flow in our management of the business going forward. All measures and initiatives implemented in conjunction with Performance > NEXT are taking us in the right direction. With regard to free cash flow, we are specifically concentrating on capital expenditure and consistent management of working capital. We are already making measurable progress, which will continue to have a noticeably positive impact on earnings—whether in terms of sales, the cost of materials or indirect purchasing.

—Nicolas Peter, Member of the Board of Management of BMW AG, Finance

A key aspect in this endeavor is to develop even faster digital processes and leaner structures. The Performance > NEXT program is expected to generate efficiency savings in excess of €12 billion by the end of 2022. Among other things, development times for new vehicle models will be reduced by as much as one-third.

On the product side, up to 50% of traditional drivetrain variants will be eliminated from 2021 onwards in the transition to creating enhanced, intelligent vehicle architectures—in favor of additional electrified drivetrains. It is in this area that the full impact of these measures will come into effect, particularly in the years after 2022.

Commitment to achieving CO2-targets. The BMW Group is continuously working to reduce the CO2 emissions of its new car fleet. The company will achieve the CO2 fleet target for its European new car registrations also this year. This is around 20% below last year’s target. One-third of that step can be achieved by further improvements to conventional drivetrain systems and two-thirds by the growth in the field of electrified vehicles.

The BMW Group is already today a leading manufacturer and supplier of electrified vehicles and is currently in the process of expanding its range significantly. By the end of 2021, the company intends to have more than one million vehicles with all-electric or plug-in hybrid drivetrains on the roads.

At that stage, the BMW Group will offer five all-electric series production vehicles. Alongside the BMW i3, demand for which increased for the sixth year in succession, production of the all-electric MINI Cooper SE was commenced at the Oxford plant (UK) towards the end of 2019. The BMW iX3 will go into production this year at the plant in Shenyang, China, followed in 2021 by the BMW iNEXT in Dingolfing, Germany, and the BMW i4 at the Munich plant—all of which will be equipped with fifth-generation electric drivetrain technology.

The next generation of the BMW 7 Series will mark a new milestone. The BMW brand’s flagship vehicle is set be available with four different types of drivetrain: as a highly efficient diesel- or gasoline-driven car; as an electrified plug-in hybrid; and, for the first time, as an all-electric BEV model, which will also be equipped with a fifth-generation electric drivetrain.

In paving the way for the future of mobility, a substantial level of upfront expenditure was required. Research and development expenses for the year 2019 in accordance with IFRS totalled €5,952 million, significantly up on the previous year (2018: € 5,320 million; +11.9%). The growing proportion of electrified vehicles is also driving up manufacturing costs. Exchange rate factors and rising prices for raw materials also put downward pressure on earnings.

I'm a pretty loyal BMW costumer but those ridiculous gas-guzzler kidneys on that i4 - an electric vehicle with near-zero cooling demand - is a deal breaker. Holy crap, they're ugly!