In Frankfurt, Kia unveiled the new Sorento, the fourth generation of its mid-size SUV, including for the first time a hybrid option. Sorento is at the heart of Kia’s reinvigorated global SUV line-up, which also includes the Seltos, Stonic, Telluride and Sportage. 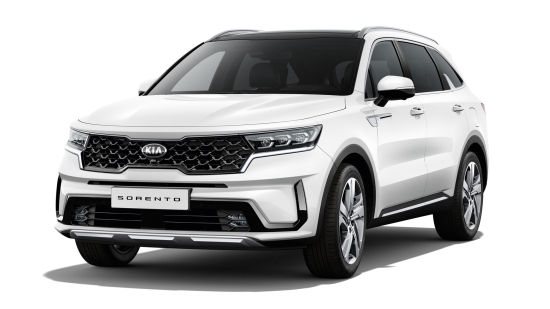 The Sorento’s evolution over the last 18 years echoes that of the Kia brand as a whole. While the car was initially launched in 2002 as a utilitarian all-terrain vehicle, the fourth-generation Sorento has been transformed into something altogether more desirable. It is an important model for Kia, particularly now that it also represents the first use of electrified power in our flagship SUV.

The new Sorento is the first vehicle to be based on Kia’s new-generation midsize SUV platform. The new platform is based around a compact engine bay structure and shorter front and rear overhangs, with a 35 mm longer wheelbase creating greater cabin space between the axles. Not only does this enable the new model’s stylish, more swept-back design; the structure and layout of the new platform means the Sorento is able to accommodate electrified powertrains for the first time.

This will also be Kia’s most high-tech car to date, due to its progressive connectivity, driver assistance and infotainment technologies. Its user-friendly twin digital displays deliver advanced graphics, new telematics features and smartphone connectivity.

A mainstay of Kia’s global line-up, more than three million Sorento models have been sold worldwide since it was launched in 2002. In that time, Europe has accounted for around 300,000 of these.

The Sorento Hybrid’s battery pack is located under the floor of the cabin. As a result, the SUV offers space for up to seven passengers as well as one of the largest luggage capacities in its class—up to 821 liters (for seven-seat models) or 910 liters (for five-seat models), depending on specification.

In seven-seat models, with all seven seats in place, trunk space is also increased by 32% compared to its predecessor, to 187 liters (VDA, diesel models; 179 liters for Hybrid models). Controls in the side wall of the boot also let users fold down the second-row seat backs remotely at the touch of a button.

The intelligent packaging of the Sorento’s new platform means the battery pack can be located under the floor, with minimal impact on cabin or luggage space.

Power is sent through the six-speed automatic transmission via a transmission-mounted electrical device, allowing the full power of the engine and motor to be transferred in parallel with minimal loss of energy. The result is immediacy in acceleration response at any speed, with direct access to available battery power at higher speeds.

The Sorento Hybrid will go on-sale in select European markets from launch, with others to follow later in 2020. The new Sorento will also be available as a Plug-in Hybrid variant from late in 2020.

Diesel. The Sorento’s new four-cylinder 2.2-liter Smartstream diesel engine is also available for European customers, producing 202 ps and 440 N·m torque. With a new aluminum block, 19.5 kg lighter than the cast iron block of its predecessor, the new engine is 38.2 kg lighter compared to that found in the third-generation Sorento.

Fuel efficiency and emissions data for the Sorento’s new powertrains will be announced closer to the car’s European on-sale date later in 2020.

Safety. The Sorento offers higher levels of active and passive safety than many of its rivals thanks to an enhanced range of driver assistance systems. Kia’s Advanced Driver Assistance Systems (ADAS) help to reduce many of the inherent hazards and stresses of driving, protecting occupants and other road users on every journey.

Kia’s level two autonomous driving technology, Lane Following Assist (LFA), controls acceleration, braking and steering depending on the vehicles in front. LFA operates between speeds of 0 and 180 km/h, using camera and radar sensors to maintain a safe distance from the car in front, while monitoring road markings to keep the Sorento in the center of its lane.

The new Sorento also features a Rear View Monitor (RVM) with Reverse Parking Collision-Avoidance Assist (PCA) and Rear Cross-traffic Collision-Avoidance Assist (RCCA). In addition, it is also the first Kia available in Europe with the company’s new Remote Smart Parking Assist (RSPA), which enables drivers to move their car autonomously out of a front-and-back parking space remotely with their key fob. This is designed to make it easier for passengers to get in and out of the car in tight parking spaces, or if another driver parks too close to access any of the doors. RSPA brakes the Sorento automatically if it detects another car, cyclist or pedestrian behind the vehicle or crossing behind it. The Sorento’s Safe Exit Assist feature also prevents rear doors from opening if the vehicle detects a hazard approaching from behind, such as a cyclist or another vehicle.

The Sorento is fitted with up to seven airbags (dual front airbags, dual front seat-mounted side airbags, side curtain airbags with rollover sensor, and front centre airbag). The front center airbag, a new innovation, provides additional head protection for front-seat occupants and is designed to prevent their heads coming into contact during a collision. All Sorento models are equipped as standard with Kia’s Vehicle Stability Management (VSM) and Electronic Stability Control systems to help drivers maintain control under braking and cornering.

The new Sorento also implements Kia’s first Multi-Collision Brake system, which enables the Sorento to mitigate the severity of secondary collisions. It automatically applies vehicle brakes when the airbags have been deployed after an initial collision, further protecting occupants from secondary frontal or side impacts.

The Sorento’s body is made up of a blend of steel and aluminum, maximizing torsional rigidity while keeping weight low. The bodyshell construction features a higher proportion of Advanced High-Strength Steel and hot-stamped steel components than its predecessor. The blend of High-Strength Steel enhances occupant safety, giving it torsional rigidity 12.5% higher than the perceived safety leader in the Sorento’s segment—yet the strengthening to the bodyshell construction renders it 5.6% (21.3 kg) lighter than that of its predecessor. Furthermore, the more rigid bodyshell reduces road vibrations in everyday use.

Like its predecessor, the new Sorento will be built for Europe and many other markets at Kia’s Hwasung manufacturing facility in Korea. The car will also be built for North America at Kia’s West Point, Georgia production plant.

European sales are due to commence in the third quarter of 2020; the car will be available to order in most of Kia’s global markets by the end of the year. It will be sold in Europe with Kia’s seven-year, 150,000-kilometer warranty as standard.