DEUTZ presented its latest developments in the field of sustainable off-highway drive systems at CONEXPO in Las Vegas. (The show, originally scheduled to run from 10-14 March, closed one day early as concern over the COVID-19 outbreak began to mount). 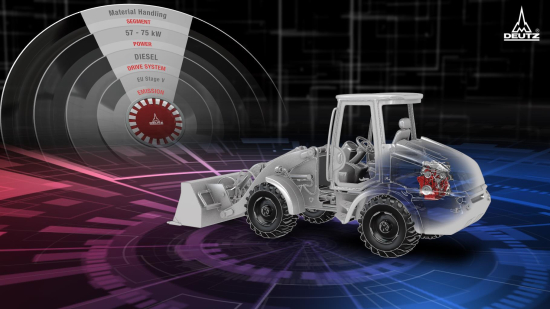 DEUTZ presented the all-electric JLG telescopic handler concept G5-18A, which was developed in collaboration with JLG. The compact 360 volt drive system uses a split drive comprising two 40 kW electric motors—one for driving and one for the hydraulics in the telescopic arm.

With the electric motors, the system delivers instant torque, making the machine even more dynamic. The battery is from the E-DEUTZ modular toolbox and offers 42 kWh of capacity. The 6.6 kW charging system can restore the battery charge to 80% within four hours.

The telescopic handler solution G5-18A, which was jointly developed by DEUTZ and JLG, uses a compact 360 volt drive system with two 40 kW electric motors—one for driving and one for the hydraulics in the telescopic arm.

DEUTZ also presented an electric hybrid drive system at CONEXPO that was designed specifically for use in aerial working platforms for low-load applications. The new DEUTZ D 1.2 hybrid engine combines a highly compact three-cylinder diesel engine with a capacity of 1.2 liters and a 48 volt electric motor.

A battery system developed in collaboration with Futavis, which is now ready for pilot production, was another highlight at the exhibition. Hundreds of these systems have already been built. DEUTZ acquired German battery specialist Futavis in 2019 in order to strengthen its inhouse expertise in the key area of battery technology. The market-ready system underlines DEUTZ’s strategic focus on electrifying its product range and on developing and industrializing its engineering expertise, high-voltage batteries, and electric drive trains.

When tackling the challenge of making drive solutions sustainable for the future, we always keep our minds open to all technologies. Our approach builds on intelligent combinations of electric drives and internal combustion engines that offer the potential to be operated in a carbon-neutral manner in the future using sustainable fuels.

—Dr. Frank Hiller, Chairman of the Board of Management of DEUTZ AG

One example is the hydrogen combustion engine offered by DEUTZ—a cost-efficient alternative to other zero-emission technologies such as fuel cells. DEUTZ has been collaborating with KEYOU to develop commercially viable carbon-neutral hydrogen engines for off-road and on-road applications, and for power generation, and bring them to production readiness.

KEYOU developed a prototype for its KEYOU-inside technology that can turn a conventional diesel engine into a drive based on hydrogen technology. DEUTZ provided support as a development partner, supplying the engine—one of its standard six-cylinder models—and sharing its engineering expertise. 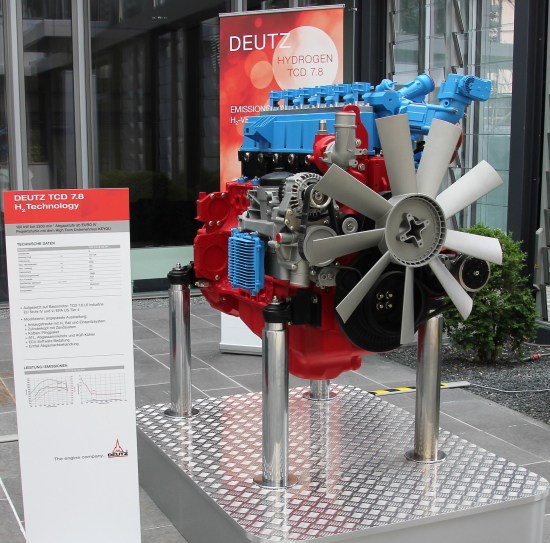 KEYOU’s first 7.8-liter prototype DEUTZ engine was unveiled to the public in 2018 at the bauma China trade fair and was also showcased in April 2019 at the bauma in Munich.

I genuinely applaud these initiatives. Obviously, a few electrical loaders are not going to save the climate but they help with less particle emissions locally and add to general acceptance of battery operated vehicles.

Also, this type of vehicles come with a much higher per-tonne price tag, which makes it easier to recover the expenses. Furthermore, many makers do not have their own engine production, making it strategically easier to change drive trains.

A lot of these vehicles have a low-to-moderate daily energy output but very high dynamic loads, making them even better suited for hybrid operation. I keep coming back to the GCC story of the Volvo hybrid loader, which replaced a 13-litre diesel with a 3.0 litre + battery system. It even kept the hydraulic drive train but still had massive fuel savings and improved functionality (due to lower centre of gravity and ability to 'anchor' the bucket further back because of smaller ICE package, if I remember correctly).

The greatest obstacle for this type of BEVs is charging when away from home. Someone should develop a nice containerized charging station, preferably driven by fuel cells (noise, emissions).

If you're going with fuel cells, you might as well put them on the machine proper and avoid charging delays entirely.

Nuvera makes fuel cells for factory fork lifts.
Some applications can not have combustion exhaust.

Point taken, however, I meant for sites/applications where another source of electricity (electrical grid) is not possible.

However, for big diggers that are not easily moved at the end of a shift, you're probably right. They should have their own average-load FCs. The Blue.World HT-PEM methanol cells could be good candidates.

Another aspect; the methanol to be supplied has a better chance of being of 100% renewable origin than local grid power, if that were a parameter.

What about the Tesla model: Buy an FC+battery-powered machine with the right to purchase methanol at the same price as diesel...