Volkswagen Commercial Vehicles (VWCV) unveiled the e-BULLI. Equipped with the drive system components of the latest Volkswagen electric vehicles, the concept vehicle is based on a T1 Samba Bus produced in 1966 and comprehensively restored. The stage for the world premiere was to have been Techno Classica 2020. As it has been postponed, VWCV is now presenting it virtually. 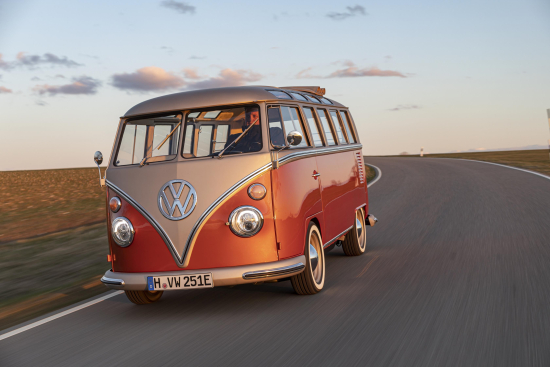 The combination of the high-end classic and high-tech electric vehicle will be available to buy for real. VWCV partner eClassics is planning to offer T1 conversions and T1 complete vehicles in the style of the new e-BULLI.

To convert an historic Bulli over to a drive system producing zero emissions, VWCV engineers and designers formed a team along with drive system experts from Volkswagen Group Components and the eClassics company, which specialises in electric car conversions. As the basis for the future e-BULLI the team chose a T1 Samba Bus produced in Hannover in 1966, which prior to its conversion spent half a century on the roads of California.

From the start, the e-BULLI was to be a T1 that utilizes the Volkswagen Group’s latest electric drive system components.

The 32 kW (44 PS) four-cylinder boxer engine gave way in the e-BULLI to a silent Volkswagen electric motor delivering 61 kW (83 PS). The comparison of the engines’ power output alone makes it very evident that the concept vehicle has completely new drive characteristics, as the electric motor is almost twice as powerful as the boxer. With maximum torque of 212 N·m, the new drive provides more than twice the force of the original T1 engine from 1966 (102 N·m). 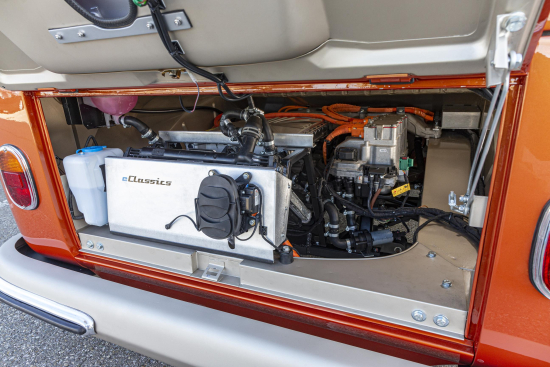 There has never been an official T1 as powerful as this e-BULLI. New in this form, it thus becomes a silent cruiser that combines the fascination of a zero-emission drive system with the incomparable style of a classic Bulli.

Power transmission is by means of a 1-speed gearbox. The drive system is coupled with the gear lever, which is now positioned between driver and front passenger seat. The automatic transmission’s selector settings (P, R, N, D, B) are shown next to the lever. In position B the driver can vary the degree of recuperation, i.e. of energy recovery when braking. The e-BULLI reaches a top speed of 130 km/h (electronically limited). With the original drive system the T1 managed a top speed of 105 km/h.

Just like the boxer engine of the 1966 T1, the combination of gearbox and electric motor integrated in the back of the 2020 e-BULLI drives the rear axle. A 45 kWh lithium-ion battery is responsible for supplying the electric motor with power. Customized for the e-BULLI in collaboration with eClassics, a power electronics system in the back of the vehicle controls the high-voltage energy flow between the electric motor and the battery and in the process converts the stored direct current (DC) into alternating current (AC). In addition, the on-board electronics are supplied with 12 volts via a DC/DC converter.

All of the electric drive system's standard parts are being made by Volkswagen Group Components in Kassel. Added to this come the lithium-ion modules designed at the Braunschweig components site. They are transferred by eClassics into a battery system appropriate for the T1. As in the new ID.3 and future ID.BUZZ, the high-voltage battery is housed centrally in the vehicle floor. This layout lowers the e-BULLI’s center of gravity and thus improves its driving characteristics.

CSS enables charging to 80% power in 40 minutes at fast-charging points The battery is charged via a combined charging system (CCS) socket. It enables charging with alternating or direct current. The battery is charged via an AC charger with charging power of 2.3 to 22 kW, depending on electricity source. With the e-BULLI’s CCS charging socket the high-voltage battery can also be charged at DC fast-charging points with up to 50 kW of charging power. In this case it can be charged up to 80% in 40 minutes. The range with one full battery charge is more than 200 kilometers (124 miles). 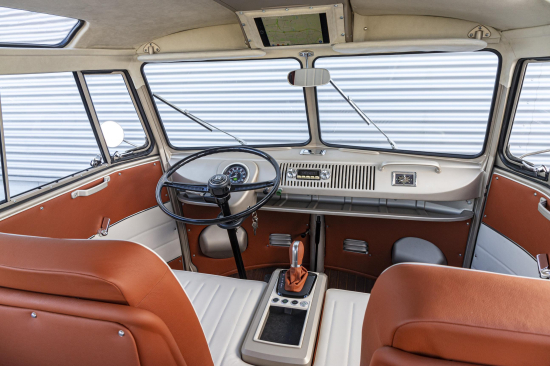 Compared to the T1, riding in the e-BULLI feels completely different. This is further enhanced by the chassis, which has also been redesigned: multi-link front and rear axles with adjustable shock absorbers and coilover struts, plus a new rack-and-pinion steering system and four internally ventilated disc brakes contribute to the new dynamic handling being transferred to the road with serene poise.

In parallel with the new electric drive system, an interior concept has been created for the e-BULLI that is both stylish and avant-garde. The new look and corresponding technical solutions were developed by the Volkswagen Commercial Vehicles design center in cooperation with VWCV Vintage Vehicles and the Communications department.

eClassics is offering the T1 conversion, complete with redesigned front and rear axles, at prices starting from €64,900. T2 and T3 conversions are being offered by eClassics as well. The company is also offering qualified dealers a ready-to-fit parts kit.