Satellite data show resurgence in NO2 emissions over China

Data from the ESA’s Tropomi (TROPOspheric Monitoring) instrument on board the Copernicus Sentinel-5P satellite shows the variation of nitrogen dioxide (NO2) emissions over China from December to March. A decline in NO2 corresponds to the outbreak of COVID-19 and a subsequent resurgence corresponds to the succes of measures to contain it.

The Copernicus Sentinel-5 Precursor mission, also known as Sentinel-5P, is dedicated to monitoring air pollution by measuring a multitude of trace gases as well as aerosols. 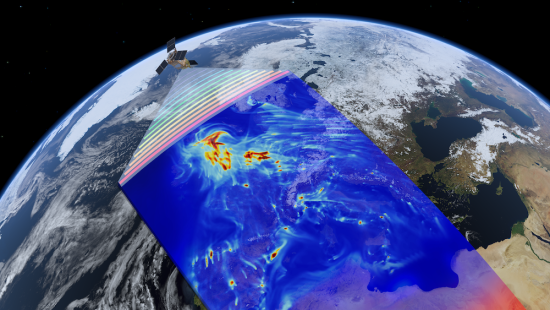 Sentinel-5 Precursor is the first Copernicus mission dedicated to monitoring the atmosphere. The satellite carries the Tropomi instrument to map a multitude of trace gases such as nitrogen dioxide, ozone, formaldehyde, sulfur dioxide, methane, carbon monoxide and aerosols. ©ESA/ATG medialab

As news of the coronavirus broke out in the Hubei province, China, in late December 2019, stricter measures were put in place. As a result, by late January, factories were closed and streets were cleared as Chinese authorities had ceased daily activities to stop the spread of the illness.

This led to a significant reduction in nitrogen dioxide emissions—those released by power plants, industrial facilities and vehicles—in all major Chinese cities between late-January and February. The drop in emissions also coincided with Lunar New Year celebrations, which usually sees a similar drop in emissions each year.

The Copernicus Atmosphere Monitoring Service (CAMS) observed a decrease of fine particulate matter—one of the most important air pollutants—in February 2020 compared to the previous three years. By combining satellite observations with detailed computer models of the atmosphere, their studies indicated a reduction of around 20-30% in surface particulate matter over large parts of China.

As the coronavirus epidemic eases in China, many provinces have downgraded their emergency response levels. Schools, factories and other public spaces are starting to re-open and workers are gradually returning to their jobs.

The animation above, using data from the Copernicus Sentinel-5P satellite, shows the nitrogen dioxide emissions from 20 December 2019 until 16 March 2020, using a 10-day moving average. The drop in emissions in late January is visible, coinciding with the nationwide quarantine, and from the beginning of March, the nitrogen dioxide levels have begun to increase.

Satellites offer a unique vantage point to monitor the health of our planet. Sentinel-5P is one of seven Copernicus satellites in orbit today. It currently provides the most accurate measurements of nitrogen dioxide and other trace gases from space.

As nitrogen dioxide is primarily produced by traffic and factories, it is a first-level indicator of industrial activity worldwide. What is clearly visible is a significant reduction of nitrogen dioxide levels over China, caused by reduced activity due to COVID-19 restrictions, but also the Chinese New Year in January.

We can certainly attribute a part of the nitrogen dioxide emission reduction to the impact of the coronavirus. We currently see around a 40% reduction over Chinese cities, however these are just rough estimates, as weather also has an impact on emissions.

We are conducting a detailed scientific analysis which will soon provide more insights and quantified results in the following weeks and months.

Recent data have also shown a decline of air pollution over northern Italy coinciding with its nationwide lockdown to prevent the spread of the coronavirus (COVID-19).