Toyota Motor Corporation and NTT Corporation entered into a memorandum of understanding concerning a business and capital alliance to build a long-term and continuous cooperative relationship that enables the commercialization of smart city businesses via the realization of a smart city platform. 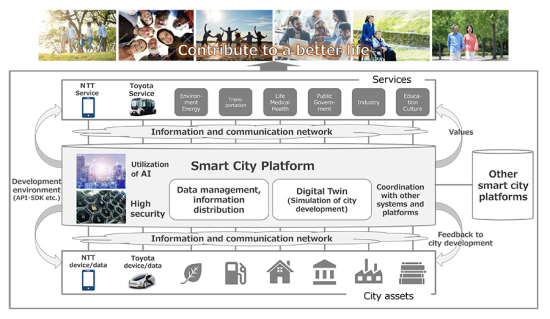 The automotive industry itself is undergoing a major transformation due to the complex combination of diversifying market needs, tightening environmental and safety regulations, the sophistication of advanced technologies, entrance by other industries, and the diversification of the mobility business, etc.

Meanwhile, in the telecommunications market, the use of various digital services is advancing due to the rapid development of cloud services, IoT, big data, AI, etc. Digital transformation, which can make better-directed innovation a reality by analyzing and utilizing the data accumulated through the use of these services, is advancing worldwide.

The two companies have been collaborating in the connected car field for several years. (Earlier post.) However, in response to these changes in the business environment, the two companies believe that it is necessary not only to seek to further strengthen the business foundations that they have been cultivating to date, but also, by further building the cooperative relations between them, to engage in the creation of new value that enables sustainable growth.

In particular, the two companies have initiated activities related to smart cities, which can solve various issues by improving the efficiency and sophistication of functions and services in cities and regions through the utilization of advanced technologies and create new value, including comfort and convenience, and which they view as being an important area of focus in the future.

On 7 January at CES in Las Vegas, Toyota announced the outline of a project to build a prototype city connecting all kinds of goods and services that support people’s lives. (Earlier post.) The project will use the soon-to-be former site of the Higashi Fuji Plant of Toyota Motor East Japan, Inc. (in Susono City, Shizuoka Prefecture), which is scheduled to close at the end of 2020, to move verification initiatives forward in coordination with various partner companies and researchers toward the creation of a new city. Toyota named this city “Woven City” and is promoting efforts to make smart cities a reality.

Meanwhile, the NTT Group is collaborating with Fukuoka, Sapporo, Yokohama, Chiba and other local governments as well as companies to solve various city and community issues. Under the smart city initiative in Las Vegas, announced in December 2018, various collected data becomes the property of Las Vegas City, and by utilizing the most advanced AI, IoT, and ICT resource management technologies, the city is able to quickly detect, analyze, and predict incidents and accidents, and optimally to manage ICT resources, and the NTT Group is promoting initiatives for deployment of such practices in other cities.

Amid these efforts, in order to maximize the impact of issue-solving and the addition of value enabled by transforming cities into smart cities and to improve regional and national strength, Toyota and NTT came to the conclusion that it is necessary not only for each company to engage in its own projects but also for both companies to work closely in jointly building and operating the smart city platform (details of which can be found below) as a core foundation for realizing smart cities and introducing it in various cities in Japan and worldwide. Therefore, the two companies have decided to enter into a business and capital alliance.

The two companies will jointly build for smart cities the Smart City Platform that will offer value to all domains, from people, cars and houses, to everyday life, business, infrastructure and public services related to residents, businesses, local governments, etc.

As a precedent model, it will first be implemented in the Higashi-Fuji area of Susono City, Shizuoka Prefecture (Woven City) and in the Shinagawa area in Minato-ku, Tokyo (a part of the NTT block in front of Shinagawa Station), and will then be introduced to other cities in succession.

Toyota shall hold 80,775,400 shares of NTT’s common stock (with the percentage to the total number of issued shares being roughly 2.07% and the total amount of shares acquired being valued at roughly two hundred billion yen) by way of the disposition of NTT treasury stock through the third party allotment of shares conducted by NTT.

Furthermore, NTT shall hold 29,730,900 shares of Toyota’s common stock (with the percentage to the total number of issued shares being roughly 0.90% and the total amount of shares acquired being valued at roughly two hundred billion yen) by way of the disposition of Toyota treasury stock through the third party allotment of shares conducted by Toyota.