For the past four years, the Co-Optimization of Fuels & Engines (Co-Optima) National Laboratory consortium has focused research efforts primarily on turbocharged (boosted) spark-ignition (SI) engines for light-duty vehicles. This research involves identifying the fuel properties and engine parameters that mitigate knock and emissions, while maximizing boosted SI efficiency and performance.

The consortium, jointly sponsored by the Department of Energy’s Office of Energy Efficiency & Renewable Energy’s Bioenergy Technologies Office and Vehicle Technologies Office, has now released as a capstone summarizing findings from the first phase of the Co-Optima initiative, the publication, “A Transportation Future with Science in the Driver’s Seat: Mapping a Viable Route Forward for Affordable, Efficient, and Clean Fuels and Engines”. 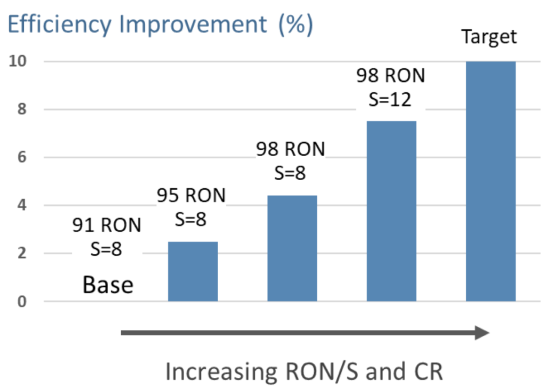 What Fuels Do Engines Want? Over the course of three years, Co-Optima researchers performed a number of engine experiments focused on developing a comprehensive understanding of the relationship between fuel properties and boosted SI engine parameters (e.g., compression ratio, extent of downsizing, etc.). Central to this effort was development of an engine efficiency “merit function,” which is a numerical equation that quantifies the relationship between fuel properties.

The merit function quantifies the impact of six fuel properties: RON, octane sensitivity (S), heat of vaporization (HOV), flame speed, particulate matter index (PMI), and catalyst light-off-temperature. Of the fuel properties investigated, these six were found to have the most impact on engine efficiency and emissions.

What Fuels Should We Make? The Co-Optima evaluation process involved a screening approach that efficiently identified blendstocks from diverse chemical families that have the greatest potential to increase boosted SI efficiency, as well as key barriers to their near-term commercialization when sourced from biomass.

The results identified 10 fuel blendstocks from four chemical families (see Figure 3) that impart the desired properties to a petroleum base fuel. The 10 blendstocks include a variety of alcohols, an olefin, a furan mixture, and a ketone, with the alcohols and olefin exhibiting the fewest barriers to commercial adoption. Of these 10 blendstocks, six were assessed to have the fewest significant practical barriers to adoption which include alcohols and an olefine (alkene): di-isobutylene, ethanol, a fusel alcohol blend, isobutanol, n-propanol, and isopropanol.

What Will Work in the Real World? Co-Optima researchers have shown that all the high-performing boosted SI blendstocks can be produced from various resources, including conventional petroleum, natural gas, and renewable domestic feedstocks that offer significantly lower lifecycle greenhouse gas emissions and other benefits, such as increased domestic fuel supply and diversity. Because the state of technology readiness of biomass-sourced blendstocks is much less developed than conventional fossil-based blendstocks, they analyzed 24 biomass-derived boosted SI blendstocks against 17 metrics assessing economic benefits, technology readiness, and environmental viability.

The findings indicate that all of the top-performing blendstocks have the potential to reduce life-cycle greenhouse gas emissions by at least 60% compared to petroleum-based fuels. At a 30% blend level, this equates to an 18% reduction in emissions for the finished fuel. This information provides the biofuel community a comprehensive and consistent comparison of the feasibility and technical research and development barriers to commercializing promising boosted SI blendstocks.

The first three years of Co-Optima research have provided the technical foundation for industry to develop improved fuel/engine solutions by identifying fuel property impacts on engine efficiency, fuel blendstocks that are capable of providing those properties, and solutions that are scalable, sustainable, affordable, and compatible. Estimations indicate that fuel economy improvements are possible with improvements to RON, S, and HOV.

The collaboration combines the expertise of two DOE research offices, nine national laboratories, and multiple university and industry partners. The Co-Optima team is currently seeking new partners from U.S. industry, educational institutions, and nonprofits. Proposals are due 19 April, and information about the competitive award process can be found on the consortium website.