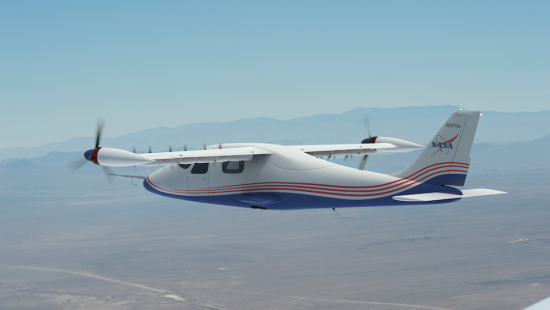 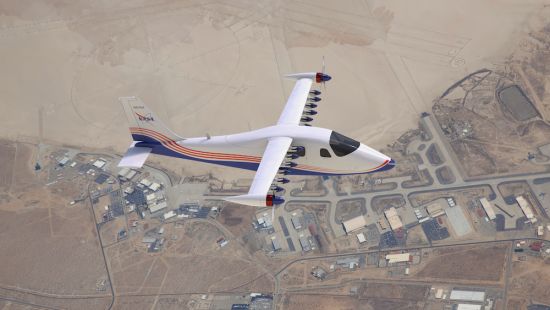 X-57 Maxwell flying in cruise mode over NASA’s Armstrong Flight Research Center in Edwards, California. In Mod IV test flights, X-57’s high-lift motors will deactivate during cruise mode, and their propeller blades will fold in to the nacelles to reduce drag. The motors will reactivate and use centrifugal force to spin the blades back out to provide necessary lift for landing. 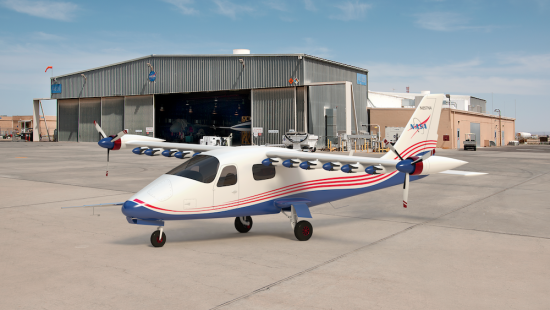 The X-57 Maxwell sitting in its final configuration in front of a hangar at NASA’s Armstrong Flight Research Center in Edwards, California. This configuration, known as Mod IV, features a high-aspect ratio wing, relocation of the cruise motors to the wingtips, and 12 smaller high-lift motors with propellers for takeoff and landing.

The agency recently ran a series of structural ground tests on the Mod II Maxwell, giving engineers a look at the vehicle’s predicted characteristics during flight. In addition to testing the X-57’s cruise motor controllers, which are critical for providing power to the aircraft’s electric motors, similar ground vibration testing took place on the wing and fuselage. These tests are helping NASA examine the integrity of the component for flight conditions.

Electric drive has an interesting advantage, that of nearly silent takeoffs. The fixed pitch props can turn more slowly on takeoff, yet still receive full rated power. Then prop RPM increases as airframe speed increases. This is very unlike piston engines that make full power at only one RPM.

I don't see the need for 12 small motors and props.

The array of props increase airflow over the wing during takeoff, greatly lowering the speed at which such a small wing can perform.

The original Technam wing has about twice the surface area.

That's right. The 12 small propellers generate lift over the entire wing and since the wing is much smaller it has less drag. Also, after takeoff the propellers will fold back.
(Reference: X-57 Home:https://www.nasa.gov/specials/X57/small-wing-act-bigger.html)

Traditionally, putting propellers far from the fuselage creates a hazard should one fail during takeoff--pilot has to manage the turning moment from single engine on one side. I suppose this isn't such a problem with the smaller takeoff/landing motors along the wingspan.

The redundancy of the motors along the wing span suggest that the failure of a tip motor could be offset by over-powering the other props on that wing long enough to land safely.