The first of 130 Solaris electric buses (earlier post), a Solaris Urbino 18 electric bus, no. 5870, has been deployed in Warsaw. Since the beginning of the year, Warsaw has been delivered electric buses under the contract that Solaris secured in July last year. 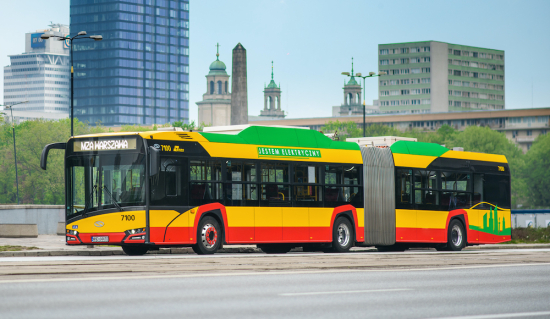 Each of the 130 articulated, electric Urbinos has a capacity for 133 passengers. The vehicles are equipped with 150 kWh Solaris High Power batteries. They feature a high power density, and can be charged rapidly.

The batteries have a long life and a significant number of charging cycles. Similar battery solutions have been implemented by Solaris in electric buses operating in Brussels and in Barcelona, among others.

The batteries will be recharged by means of plug-in depot charging stations and by means of pantographs. Each articulated electric bus for Warsaw features two charging sockets: one above the right wheel arch and the other placed behind the last door; the pantograph is mounted on the roof.

The purchase of 130 articulated electric buses made by Solaris is a big event for us. Thanks to this and to our other investments in the fleet we will soon be able to boast nearly 500 low- and zero-emission vehicles. This is one of the best results Europe-wide and great news for Warsaw residents.

The cooperation between the Bolechowo-based manufacturer and MZA in Warsaw dates back to 1997. It is the company’s biggest client to-date. Over the course of 24 years, the bus maker has supplied to Warsaw more than 1100 vehicles, including 21 electrically propelled ones. In line with the agenda of MZA, by 2022 one third of the bus fleet in Warsaw will be made up of vehicles with alternative propulsion systems: electric, hybrid or gas.