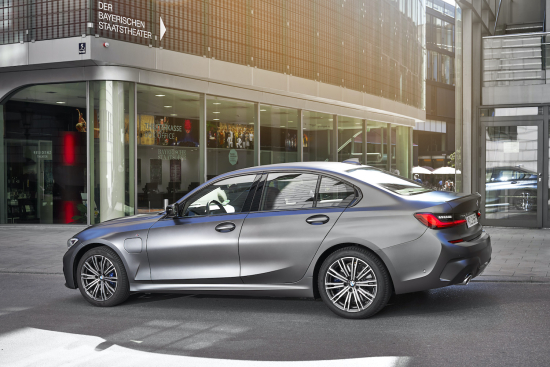 The new BMW 330e and 330e xDrive Sedans utilize an intelligently controlled powertrain consisting of an electric motor, a high voltage battery pack and an internal combustion gasoline engine to enhance the performance driving experience of the 3 Series.

A brand-new feature in the new BMW 330e and 330e xDrive Sedans is XtraBoost, which enhances power and performance when the throttle is depressed to the kick down position. Available in SPORT mode, XtraBoost offers an immediate 40 hp power increase for up to 10 seconds.

Purely electric driving up to 87 mph. In the HYBRID driving mode, the new BMW 330e and 330e xDrive Sedans can operate at speeds up to 68 mph on electric power alone, an increase of 19 mph over its predecessor. Emissions-free and fuel-free ELECTRIC mode allows driving up to 87 mph, up from the previous 75 mph. The standard Active Protection for Pedestrians features an exterior speaker system to generate an unmistakable sound created specifically for electrified BMWs when operating in electric-only mode at speeds up to 20 mph.

Intelligent connectivity enables the sport automatic transmission to adapt its shift strategy according to the route and driving situation. Working with the standard navigation system, the 8-speed Sport Steptronic transmission uses data from this system and from the optional Active Cruise Control system’s radar sensor. This makes it possible for the transmission to avoid unnecessary gear changes when negotiating a series of fast corners and, when approaching a vehicle ahead for example, to shift down early in order to use the engine braking to scrub off speed.

BMW Intelligent xDrive. The fully variable power transfer of BMW’s intelligent xDrive ensures maximum traction and directional stability in all road and weather conditions while also promoting sportier handling. This functionality comes courtesy of the electronically controlled multi-plate clutch in the transfer case which links up with the Dynamic Stability Control (DSC) system and constantly adjusts power transmission in response to the driving situation. In this way, any tendency of the vehicle to oversteer or understeer greatly reduced.

The system’s rear-biased set-up helps ensure the new BMW 3 Series Sedan retains the exhilarating driving experience drivers expect from a BMW. Sending more drive power to the rear wheels under normal driving increases agility when cornering. In situations which do not require all-wheel drive, the efficiency of BMW xDrive is increased by directing all the engine’s torque to the rear wheels. The weight of the system has also been reduced, while optimized oil supply increases internal efficiency.

Chassis technology. The body structure and chassis of the new BMW 330e and 330e xDrive Sedans was developed with a focus on enhanced driving dynamics, agile handling characteristics, high-precision steering and superior braking performance. The foundations for these attributes are provided by a low center of gravity, by the increase in the front and rear track compared with the predecessor model, by significantly increased camber values for the front wheels and by the substantial increase in the stiffness of the body structure and suspension mountings.

In addition to these measures, new shock absorber technology has been developed for the BMW 3 Series Sedan. The lift-related dampers are part of the car’s standard chassis and make a major contribution to the balance of sportiness and comfort. The car’s handling and steering dynamics can be fine-tuned with a series of chassis options.

Camera images and the data gathered by radar and ultrasonic sensors are used to monitor the vehicle’s surrounding area and either alert the driver to hazards or minimize the risk of an accident by means of corrective braking and steering. The optional Active Cruise Control with Stop and Go braking function helps to make life easier on long-distance journeys by automatically accelerating or slowing down the car to maintain the desired speed set by the driver. The set speed can be imported directly from the optional traffic sign recognition system’s display.

The Active Cruise Control system with Stop & Go function goes even further to help the driver by not just maintaining the chosen cruising speed but also keeping a safe distance from vehicles travelling ahead. The system is operational in a speed range from 0 – 130 mph and is able to brake the vehicle to a standstill, if necessary. The maximum length of time that can pass before the car starts off again automatically has been extended to 30 seconds. In order to determine the ideal moment to pull away, the system’s sensors now register not only the vehicle immediately ahead, but the one in front of that as well.

The new 3 Series PHEV models come standard with the Active Guard, Frontal Collision warning with City Collision Mitigation and Lane Departure Warning, the latest version of which also alerts the driver when a cyclist is detected. Depending on the situation, the system can bring the vehicle to a halt to either avoid a collision or minimize its consequences.

The optional Driving Assistant includes Blind Spot Detection systems, which operate from 44 – 130 mph and from 12 mph to the car’s top speed respectively, and help the driver to guide the car back onto the correct path with a steering input. The Driving Assistant’s remaining functions also include Rear Collision Protection and Cross-Traffic Alert, thereby reducing the risk of a collision when reversing into roads that are obstructed from the driver’s view. To help it keep an eye on what’s happening behind the car, Cross-Traffic Alert is able to employ both the radar sensors in the rear bumper and the rear view camera.

Driving Assistant Professional. The optional Driving Assistant Professional offers the full complement of assistance systems for comfortable and safe motoring. Underpinning it all is a trifocal camera co-developed with Mobileye, working in conjunction with a front facing radar. This complete package makes its systems available in an exceptionally wide range of situations.

In addition to all the components of the Driving Assistant and the Active Cruise Control with Stop & Go function, it also includes the Steering and Lane Keeping Assistant, which takes its cues from road markings and vehicles driving ahead and works together with the driver to help keep the vehicle in the detected lane. A dedicated button on the steering wheel’s left-hand spoke ensures the systems are easy to operate. Pushing it once activates both the Active Cruise Control and the Steering and Lane Keeping Assistant.

The Extended Traffic Jam Assistant is designed to help the driver during the most tedious driving environment, stop and go traffic. Designed to operate on limited access highways at speeds up to 37 mph, this system integrates Lane Keeping Assistant, Active Cruise Control with Stop and Go and a driver attention monitoring camera that replaces the need to touch the steering wheel every 30-50 seconds as long as the driver’s attention is clearly on the road ahead.

Parking Assistance Package Plus with Back-Up Assistant. The standard Park Distance Control (PDC) with sensors at both the front and rear provides visual and acoustic signals to prevent collisions with obstacles located to the side or rear of the vehicle. The optional Parking Assistance Package goes further with Automatic Parking, which automatically selects either parallel or perpendicular spaces along to the road, and maneuvering into them.

The latest version of the system takes care of steering the car, accelerating, braking and automatic transmission shifting. What’s more, Automatic Parking can now also be used to automatically maneuver out of parallel parking spaces. Here, the driver first specifies the direction in which the parking space is to be excited by switching on the turn signal for the appropriate side. The system then guides the vehicle—using reversing and steering inputs—into a position from which the driver can leave the parking space with the steering turned to the same angle.

Another of the Parking Assistant’s features is the innovative Back-Up Assistant, which helps the driver to exit parking spots or maneuver when space is limited. This system is the only one of its kind in the new BMW 3 Series Sedan’s segment.

Back-Up Assistant offers the option of automated reversing in confined spaces or situations where the driver does not have a clear view, such as narrow parking garages or entrances to courtyards. To do this, the system stores the steering movements for any section the car has just driven forward along at no more than 22 mph. The system is then able to reverse the vehicle for distances of up to 50 yards by steering it along exactly the same line it has just taken when moving forward, while all the driver has to do is operate the accelerator and brake pedals and monitor the area around the car. The Back-Up Assistant can back the car up at a maximum 5.5 mph.

The rear view camera and the functions included with the optional Parking Assistant Package provide drivers with an excellent overview of the situation when parking or exiting parking spaces. The Park View, Panorama View and Remote 3D Top View features are used to create a 360° image of the vehicle and its surroundings—from different perspectives—in the Control Display. Meanwhile, the Remote 3D View function gives drivers the ability to call up a three-dimensional live image of their vehicle and its immediate vicinity on their smartphone.

BMW Digital Key. The BMW Digital Key employs Near Field Communication (NFC) technology to allow the new BMW 330e and 330e xDrive Sedans to be locked and unlocked from a compatible smartphone, removing the need for a conventional car key. Holding the smartphone up to the door handle opens the car. Once inside, the engine can be started as soon as the phone has been placed in the wireless charging or smartphone tray. The BMW Digital Key is compatible for all NFC-capable Samsung Galaxy smartphones running Android 8.0 and above. Compatibility is limited to select carriers.

Fantastic, but expensive.
So please extend the range to use lower power ICE engines, like the 1.5L or the 2L diesel in 150 or less BHP trim.
And extend it to the 5 series where you get a larger car for your money.
A PHEV with 20-30 miles electric is a more or less perfect car, if enough people can afford it.