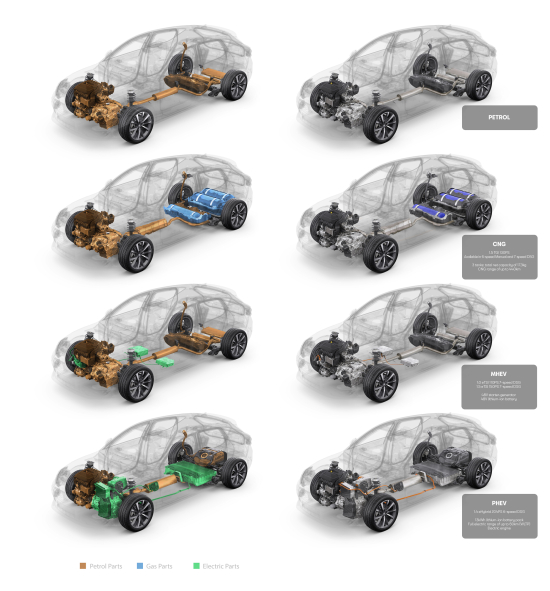 In total, there are eleven different mechanical variants, with power outputs ranging from 90 PS with the 1.0 TSI to 204 PS with the SEAT Leon eHybrid. The all-new SEAT Leon also offers different predefined drive modes—Eco, Normal, Comfort and Sport—to the driver. With the individual drive mode, the driver is able to adapt the car to personal needs, thanks to the new DCC slider.

TSI engines. The fourth-generation Leon increases its efficiency with a range of advanced combustion engines. All gasoline engines offered by the new Leon are direct injection and turbocharged units, with power outputs between 90 and 190 PS.

The two 1.0 TSI and also the 1.5 TSI 96kW/130PS engines with manual gearboxes use a Miller-cycle combustion process and variable geometry turbocharger. The Miller-cycle optimises valvetrain control with early closure of the inlets combined with a higher compression rate and turbocharging to better control the air-fuel mixture, to improve efficiency by up to 10%.

Available with power outputs 96kW/130PS and 110kW/150PS, the larger 1.5 liter gasoline engines are linked to six-speed manual gearbox and feature integrated Active Cylinder Management which, in some driving conditions, works with only two cylinders to reduce the fuel consumption and maximise efficiency.

At the top of the tree is the 140kW/190PS 2.0 liter TSI unit always linked to the seven-speed dual-clutch transmission.

The 5-door and the Sportstourer versions have a manual transmission for the 85kW/115PS, while the 110kW/150PS diesel engine is offered with either manual or DSG automatic transmission, delivering a maximum torque of 360 N·m at 1700-2750rpm. The Sportstourer is also available with a 110kW/150PS unit mated to a DSG gearbox and 4Drive system.

The mild hybrid version (eTSI) system, which is available with the 1.0 TSI 81kW/110PS and the 1.5 liter 110kW/150PS gasoline unit, both exclusively in combination with the DSG transmission, mates 48V mild-hybrid technology to the combustion engine.

CNG. The all-new SEAT Leon also has the option of a CNG 1.5 liter TGI unit that produces 96kW/130PS of power.

The all-new SEAT Leon will presented for the first time with a CNG 1.5 liter TGI unit that produces 96kW/130PS of power. The vehicle integrates three CNG tanks with a total net capacity of 17.3kg, giving the all-new SEAT Leon TGI a range of up to 440 km without needing to refuel. And if the CNG tanks do run dry, the engine switches automatically to run on gasoline until reaching the next CNG fuel station. Once there, it’s as simple to refuel as any other vehicle in the range.

Offer gasoline, HEV, PHEV and EV in one model, give people choices.