Home About Contact RSS GCC Twitter Newsletter
Mobility services infrastructure company Via closes Series E round; valued at $2.25B
Ford to produce 50,000 Airon ventilators in Michigan in next 100 days; partnering with GE Healthcare

The falling cost of making hydrogen from wind and solar power offers a promising route to cutting emissions in some of the most fossil-fuel-dependent sectors of the economy, such as steel, heavy-duty vehicles, shipping and cement, according to a new report from BloombergNEF (BNEF).

Hydrogen Economy Outlook, a new and independent global study from research firm BloombergNEF (BNEF), finds that clean hydrogen could be deployed in the decades to come to cut up to 34% of global greenhouse gas emissions from fossil fuels and industry at a manageable cost. However, this will only be possible if policies are put in place to help scale up technology, and drive down costs. 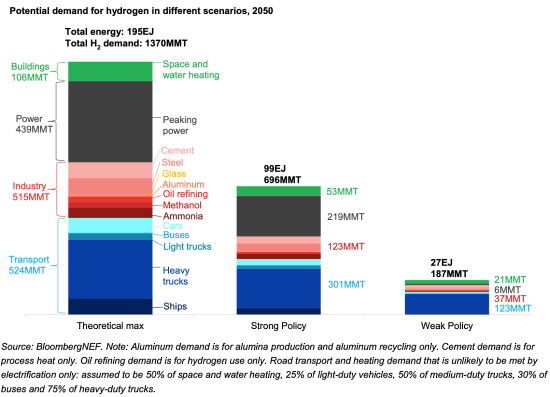 The report’s findings suggest that renewable hydrogen could be produced for $0.8 to $1.6/kg in most parts of the world before 2050. This is equivalent to gas priced at $6-12/MMBtu, making it competitive with current natural gas prices in Brazil, China, India, Germany and Scandinavia on an energy-equivalent basis.

When including the cost of storage and pipeline infrastructure, the delivered cost of renewable hydrogen in China, India and Western Europe could fall to around $2/kg ($15/MMBtu) in 2030 and $1/kg ($7.4/MMBtu) in 2050.

Hydrogen has potential to become the fuel that powers a clean economy. In the years ahead, it will be possible to produce it at low cost using wind and solar power, to store it underground for months, and then to pipe it on-demand to power everything from ships to steel mills.

—Kobad Bhavnagri, head of industrial decarbonization for BNEF and lead author of the report

For hydrogen use to have net environmental benefits, it must be produced from clean sources, rather than from fossil fuel processes—the usual method at present. 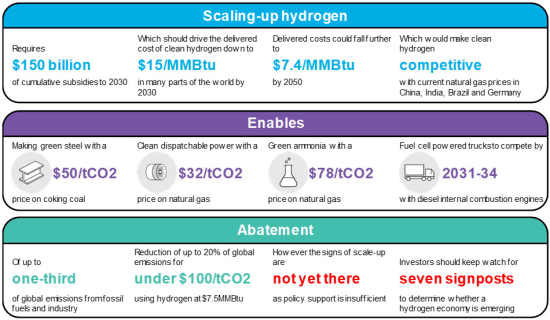 Summary of the economics of a hydrogen economy. Source: BloombergNEF. Note: Clean hydrogen refers to both renewable and low-carbon hydrogen (from fossil-fuels with CCS). Abatement cost with hydrogen at $1/kg (7.4/MMBtu).

Renewable hydrogen can be made by splitting water into hydrogen and oxygen, using electricity generated by cheap wind or solar power. The cost of the electrolyzer technology to do this has fallen by 40% in the last five years, and can continue to slide if deployment increases. Clean hydrogen can also be made using fossil fuels if the carbon is captured and stored, but this is likely to be more expensive, the report finds.

Storing and moving hydrogen is challenging. For hydrogen to become as ubiquitous as natural gas today, a huge, coordinated program of infrastructure upgrades and construction would be needed. For example, 3-4 times more storage infrastructure would need to be built at a cost of $637 billion by 2050 to provide the same level of energy security as natural gas. However, cost efficient large-scale options do exist and could be used to supply industrial customers with the clean gas.

If the clean hydrogen industry can scale up, many of the hard-to-abate sectors could be decarbonized using hydrogen, at surprisingly low costs.

The study found that a carbon price of $50/tCO2 would be enough to switch from coal to clean hydrogen in steel making by 2050; $60/tCO2 to use hydrogen for heat in cement production; $78/tCO2 for making chemicals like ammonia, and $145/tCO2 to power ships with clean fuel, if hydrogen costs reach $1/kg.

Heavy trucks could also be cheaper to run on hydrogen than diesel by 2031, although batteries remain a cheaper solution for cars, buses and light trucks.

The clean hydrogen industry is currently tiny and costs are high. There is big potential for costs to fall, but the use of hydrogen needs to be scaled up and a network of supply infrastructure created. This needs policy coordination across government, frameworks for private investment, and the roll-out of around $150 billion of subsidies over the next decade.

That may sound daunting but it is not, in fact, such a huge task—governments around the world currently spend more than twice that every year on fossil fuel consumption subsidies.

The outlook for a hydrogen economy is still uncertain, as there is insufficient policy to support investment and to scale up the industry, according to the BNEF study. Even if that occurs, hydrogen would not be a silver bullet.

Carbon prices and emission policies will still be essential to drive hydrogen use, particularly in locations with very cheap coal and gas. Despite the potential cost reductions, hydrogen must still be manufactured—so it is likely to remain a more expensive form of energy. Industry will not automatically switch to using it—a commitment to net-zero emissions is required.

Hydrogen is promising and powerful because it can be used for so many things. Renewable energy has paved the way to carbon-free electricity. But to meet net-zero emissions targets, we need to go beyond electricity and have carbon-free fuels. That is the role for hydrogen.

$637 billion for storage alone.  The hardware to make it, and the energy required to feed that hardware, is extra.

The storage system cost would buy about 160 GW(e) of nuclear generation @$4000/kW, which would replace all remaining coal-fired power and quite a bit of gas.  If GE-Hitachi can get the BWRX-300 in at $2000/kW, the US could essentially decarbonize the electric sector with those alone for what expansion of hydrogen storage would cost.

Just simply stated, the quest for a hydrogen solution for decarbonization is a fool's errand.

The question is - what is the best way to use renewable electricity that cannot be used immediately.
You have several options:
- Ship it elsewhere via HVDC (or whatever)
- Turn it to some chemical (H2 for instance)
- Use it in some new industry
- store it in a battery
- store it in a pumped storage station or compressed air storage
- Use it to charge Battery Electric vehicles

Battery storage can be used for overnight and load shaping, but not much beyond that. BEVs are good for urban use, but not so good for shipping or heavy goods or aircraft.
Pumped storage is geography dependent - most it has already been exploited and there are always environmental issues.
HVDC is a good idea, but very expensive at present.

That leaves chemical storage. Ideally, you could create some easy to store liquid or gas, not H2. Methane or methanol would be a possibility. Or find some way of adding the H2 to wood to make liquid hydrocarbons.

Or, you could go nuclear.

Instead of a carbon tax on the consumer which would be politically difficult, why not mandate that each energy company must increase the Renewable Energy content of its product by 1% of total its sale volume, annually. For example, if this year the industry-average RE content of energy sold is 10%, the next year, the RE content must be 11%...and so on, for the next 7 years, then will increase by 2% each year, for example, from 17% RE content by year 2027, in 2028, the total RE content will have to be 19%...and so on. A RE credit trading scheme can also be permitted for companies that cannot yet ramp up the RE content of its energy products. In this fashion, we will be guaranteed to reach goal without any hardship.

Renewable Portfolio Standards for manufacturers are as bad an idea as those for utilities.  They specify the means whether or not it is effective, not the end to be achieved.  They should be eliminated and replaced with GHG emission ceilings, carbon taxes or the like.

What are you whining about, SJC-who-can't-even-seem-to-keep-his-ID-consistent?  These things are patently obvious.  A "renewable portfolio standard" which calls for 50% of all electric power to come from wind and solar is perfectly consistent with the rest of that power coming from a coal-burning plant which runs its furnace at no less than 75% of maximum rate and simply dumps steam direct to the condenser to modulate its "balancing" generation.  This plant could emit 2000 gCO2/kWh and still help meet the "renewable" fraction; limiting actual impact on the environment is not part of the standard.

It's also obvious that a nuclear plant which directly emits 0 gCO2/kWh is not designated "renewable" so gets pushed off the grid as part of meeting the arbitrary demand for "renewable" power, increasing FF consumption and CO2 emissions in the process of meeting the new demand for "balancing" generation.  Again, the environment suffers.

Or maybe it's only obvious if you have an IQ over 100.

@E-P,
Nuclear energy can be regarded as Renewable Energy if and when Fast Breeder Reactor will be proven safe , with very little nuclear waste. Otherwise, nuclear waste is still currently an issue yet to be resolved. "Across the United States, nuclear waste is accumulating in poorly maintained piles. 90,000 metric tons of nuclear waste requiring disposal are currently in temporary storage. The United States, however, has yet to construct a long-term storage solution for this waste, leaving the nuclear material vulnerable to extreme weather events such as hurricanes, rising sea levels, and wildfire." From: http://sitn.hms.harvard.edu/flash/2018/looking-trash-can-nuclear-waste-management-united-states/

It's a political problem, not a technical or engineering problem.  We can leave used fuel in dry casks for at least a century, no worries.  I would like to see it reprocessed and turned into FBR starting charges, FBR breeding material, and useful isotopes for things like food sterilization.  A good gamma-zap does the same thing as UHT pasteurization without the accompanying physical changes.  However, the people who hate nuclear power would literally rather die than allow it to ride to the rescue.

Part of the problem is the lies told by the fearmongers.  "Poorly maintained piles," my eye.

You're so right, it is a political problem. Please don't be so susceptible and naive to expect the Trump administration to solve that problem. Any following administration will be loathe, to say the least, to impact a due course to improve what countless others have carelessly neglected far too long. The financial disaster inherent to such action will certainly not lessen the national financial burden as is.