As states use less coal for electricity, driving electric vehicles becomes even cleaner 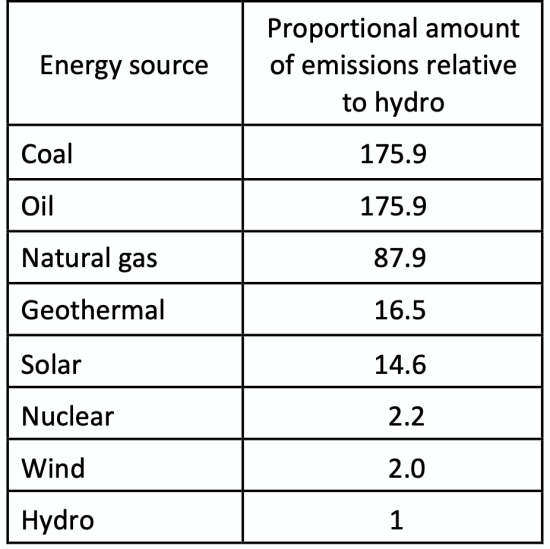 The results indicate that the percentage of electricity generated from coal decreased from 2008 to 2018 in 49 states. The largest decreases (in terms of percentage of percentage) were in Massachusetts (from 25% to 0%), Connecticut and New York (both from 14% to 1%), and Delaware (from 70% to 5%). The increases occurred only in Alaska (from 9% to 11%) and in Wyoming (from 94% to 96%). For the United States overall, the use of coal to generate electricity decreased from 49% to 28%.

The table below shows the top 10 states in terms of the percentage of electricity generated from coal in 2008 and in 2018. 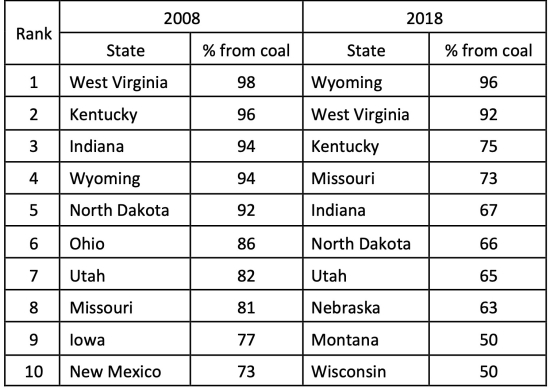 It is obvious that this will happen once you start to add wind and solar to the grid, and as the cost / kWh goes down for each of the two.
You can end up with the situation in many countries now that form time to time they will have to curtail electricity generation form renewables. It happens in Germany on sunny, windy sunday afternoons (sounds like The Kinks) and in Ireland on Windy nights/mornings.
The best way to deal with this (IMO) is to use it to charge EVs using chargers that use existing weather forecasting and AI (or whatever you want to call it) to charge when there is unwanted electricity on the grid - the price for this could be very low ( say 2-4 cents / kWh) + they could give you "green merit awards" for using up this power.
OR, people, or the grid, could store the power in batteries or some kind of power bank.
IMO, this is much better than making H2 out of it.

This is one of the big questions of the present (assuming we get COVID sorted) - what is the best way to utilise unwanted renewables?

IMO, the best way it to charge up an EV, but you could just charge a grid scale battery - domestic scale batteries seem to be crazy money.
I can think of a few other options - pumped storage hydro (obvious, but geographically limited), creating H2, exporting it by HVDC or just letting it go (which might be the cheapest way) - I am not at all sure about the economics of h2: (production, compression, storage, transmission and finally usage) - it looks like make work designed by non-engineers to me.

Pumped hydro works with the grid to get stored power where you need it.

@SJC, pumped hydro is a great boon and works perfectly with renewables, but it is only available in certain locations,
Any you can be sure that if you try to do it, every treehugger in a hundred km radius will try to stop it by finding a sub-species of snail or butterfly to protect.

Pumped hydro in Northern California can be used in the south with transmission lines.

While not efficient for driving cars compared to batteries, green H2 production using excess renewable electricity would be perfect to absorb immense amounts (and doeing so prevent immense amounts of CO2 emissions). Currently H2 is produced by steam reforming (see wiki): for every ton of H2, 9 tons of CO2 are emitted. The US currently produces about 10 million tons of H2 per year.

If green and cheap, H2 can be used for many other things, preventing CO2 emissions. One major application would be Iron production (currently iron ore is reduced using carbon, releasing CO2. This can perfectly be replaced by H2, releasing water. (Fe2O3 + C --> Fe + CO2 /// Fe2O3 + H2 --> Fe + H2O)
(if an electrolyzer is at the production site, the H2O can be reduced to H2 again and reused ; since the H2O is already extremely hot, this saves on energy)

mahonj: "Any you can be sure that if you try to do it, every treehugger in a hundred km radius will try to stop it by finding a sub-species of snail or butterfly to protect."

You are absolutely right. There is a very good project here in Australia to significantly expand our pump-hydro capacity, called Snowy 2.0. It provides 2 GW of instantaneous power and several hundred GWHr of storage. It would also significantly expand the power connectivity between the two largest States in Australia. I follow a lot of renewable energy sites here and you would think this great proposal was invented by the devil himself! Anyway the project will likely go ahead over the moans of objectors who otherwise want to save the earth.

Just curious. Why is the proportion of Solar Energy 14.6 times that of hydro power and approximately 7 times that of wind or nuclear? What are they counting? Environmental costs of infrastructure? Did they add in the CO2 added to the environment by wind turbine fires and the resulting wild fires?

The article only talks about 'emissions', not specifying in detail what that includes? CO2? CO2eq? GHG? Also the calculation method resp. the system boundary considered in the study is not clear - I would assume the energy & materials used for site production are not considered. Otherwise the proportions for different energy sources would be rather different.