Volkswagen has launched a new range of diesel engines (TDI) characterized by extremely low nitrogen oxide emissions (NOx). The Touareg V8 TDI, generating 310 kW (421 PS) (earlier post), is among the first Volkswagens to feature an exhaust purification system that brings NOx to these low level: it emits between just 0.01 and 0.02 g/km. These NOx values were determined on the basis of RDE measurements (Real Driving Emissions) in actual road traffic by independent specialist Emissions Analytics. The current Euro 6 NOx limit is 0.08 g/km.

RDE measurements defined by the European Union are intended to be extremely close to values determined in practical conditions. They supplement the new WLTP test cycle (Worldwide Harmonized Light Vehicles Test Procedure), determined on a rolling road test bed and thus in laboratory conditions, by an emissions test carried out in actual road traffic. 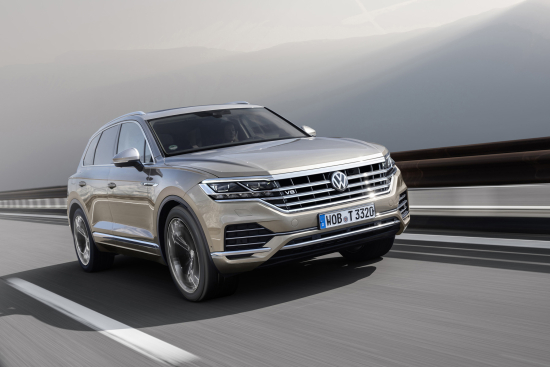 In the case of the Touareg V8 TDI, these RDE measurement runs (which have been synchronized with the actual everyday usage of Volkswagen customers as part of a targeted procedure) were performed by Emissions Analytics in three German metropolitan areas. One test was carried out in the topographically flat federal German state of Lower Saxony while two further tests were conducted on routes in Baden-Württemberg and Bavaria that included differences in altitude.

The all-wheel drive Touareg V8 TDI reliably came in below the NOx limit in each of the tests, regardless of the route, differences in altitude and individual traffic volume. In Lower Saxony, the value totalled 0.010 g/km on average; in Bavaria it amounted to 0.013 g/km and in Baden-Württemberg the value stood at 0.020 mg/km. The Volkswagen averaged a NOx value of 0.014 g/km over all three measurement runs.

In addition, the V8 TDI operates efficiently and economically as a result of several, internal engine innovations. These include a variable twin-turbo system. At part load—for example in cities or on country roads—the V8 TDI, generating 900 N·m from as little as 1,250 rpm, generates an extremely high torque and thus largely runs at low engine speeds using only one turbocharger.

The TDI flagship is not the only Volkswagen generating only a fraction of the NOx emissions permitted as the European limit: the new Golf and the current Passat with their new EA288 Evo four-cylinder model range TDI engines also fall into this category. More new models featuring TDI engines that undercut the nitrogen oxide limits by generating minimum emissions will follow.

OK, great, but lets get it on the 2L engines ASAP.
Very few people will buy the V8, the bulk of the market is in the Golf/Passat end with the 2L diesels.
I don't know how much extra this will cost, but the sooner we have it on the mass market cars (and vans) the better.

In general yes.
How about one million big rig tractors spewing out pollution?

There are already plenty big rigs on rails. I don't need them on the roads; BEVs are just fine.