U of Tennessee, TVA partner to evaluate small modular reactors

The University of Tennessee (UT) and the Tennessee Valley Authority (TVA) signed a memorandum of understanding to evaluate the development of a new generation of cost-effective, advanced nuclear reactors, such as small modular reactors (SMRs), at TVA’s 935-acre Clinch River Nuclear (CRN) site in Roane County. TVA has not made a decision to build and would first need approval from the Nuclear Regulatory Commission (NRC) for a specific design.

In December 2019, TVA became the first utility in the nation to successfully obtain approval for an early site permit (ESP) from the Nuclear Regulatory Commission. The 20-year permit approves TVA’s Clinch River site for the potential construction and operation of small modular nuclear reactors that can produce up to 800 megawatts total. The ESP addressed site safety, environmental protection and emergency preparedness associated with any of the light-water reactor SMR designs under development in the United States.

Because a technology has not yet been selected, for the Early Site Permit Application (ESPA), the plant-site interface is defined through a collection of site-related design parameters known as the PPE (plant parameter envelope).

The PPE approach provides sufficient design detail to support NRC review of the ESPA, while allowing sufficient flexibility for technical developments in new reactor technologies. The actual design selected for the CRN Site will be reviewed within a combined license application (COLA) to demonstrate that the design is bounded by the PPE, and differences would be reviewed for acceptability in the COLA. The PPE developed in support of the CRN Site ESPA is based on data from the four SMR designs under evaluation by TVA (the four US light-water SMR designs under development when the application was prepared). 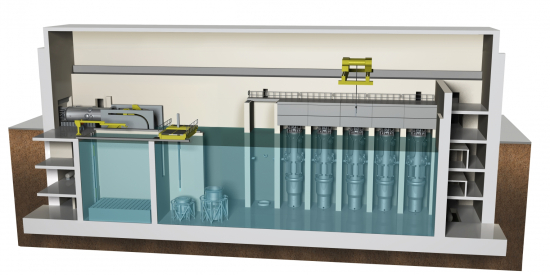 The partnership allows collaboration and evaluation of the economic feasibility of potentially operating light-water or non-light water fission reactors that build on the success of the current generation of reactors by leveraging the expertise of UT’s nuclear engineering department. This partnership also provides an opportunity to engage with students and prepare the nuclear workforce of the future.

TVA is the only utility in the nation with an approved early site permit from the Nuclear Regulatory Commission to potentially build SMRs. These partnerships are important steps in the early stages of evaluation as TVA considers the prospect of new nuclear.

SMR containment systems are constructed fully underground, resulting in improved safety and security. The smaller size enables components to be shipped to the site by rail or truck, allowing more of the construction to take place in factories. This process increases standardization, improves quality and shortens construction durations.

The Tennessee Valley Authority is a corporate agency of the United States that provides electricity for business customers and local power companies serving nearly 10 million people in parts of seven southeastern states. TVA receives no taxpayer funding, deriving virtually all of its revenues from sales of electricity.