Researchers at the Fraunhofer IFF in Germany are designing the distributed and modular production and distribution of green hydrogen for industry, business and transportation throughout the value chain—a hydrogen factory of the future.

Electricity sourced from sun and wind is used to split water into hydrogen and oxygen in a process called electrolysis. The hydrogen is stored and can be converted by fuel cells in vehicles back into electricity that powers them. We primarily have vehicle fleets with vans and forklifts operating in industrial and business parks in mind here. 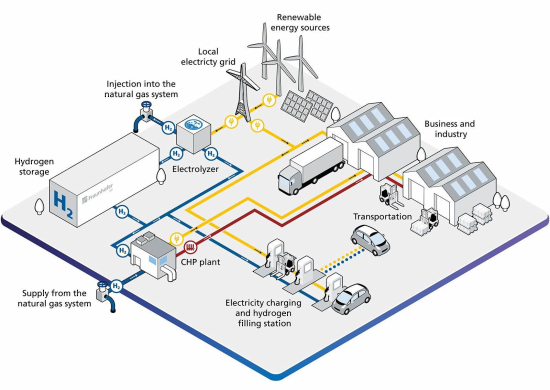 The hydrogen factory of the future. © Fraunhofer IFF

We additionally want to supply electricity, gas and heat to industry. The hydrogen produced during electrolysis can be injected into the gas grid, used as fuel, converted into methane or methanol, and made available as industrial feedstock.

The researchers are developing modularly expandable subcomponents that can be interconnected and integrated in business and industrial parks, which will enable them to implement their hydrogen factory design. Electrochemical or biochemical processes are used to produce hydrogen, depending on the conditions at the site.

It is not possible to build wind and PV plants everywhere. We are opting for site-specific solutions and using biogas plants for production where possible. Plans for a pilot plant near Gommern in Saxony-Anhalt are on the drawing board. The outcome is always green hydrogen.

The Fraunhofer IFF is working together with MicroPro GmbH and Streicher Anlagenbau GmbH & Co. KG in the HyPerFerMent I project to produce renewable hydrogen from biomass. They are employing a special microbial fermentation process similar to biogas production to produce hydrogen directly from organic waste.

The metabolites of certain bacteria produce a gas mixture containing CO2 and fifty percent H2, which can be easily purified by subsequently separating the CO2.

Researchers at the Fraunhofer IFF have teamed up with Anleg GmbH to build one of the subcomponents, the Mobile Modular H2 Port (MMH2P), a portable hydrogen filling station for short trips of up to 200 kilometers. Expandable pressure systems with compressors on a trailer can be refilled and can also dispense hydrogen. The German Federal Ministry of Education and Research (BMBF) is funding the project.

Since systemically integrated hydrogen production is important to the researchers, they will not only be using the hydrogen produced during electrolysis but also the oxygen—for welding processes or for ozonation in sewage treatment plants, for example. Micropollutants such as pharmaceuticals, pesticides and cosmetics can be removed from wastewater when ozone is introduced. Another use scenario envisions using the oxygen in agriculture to desulfurize biogas plants.

The research team acquired expertise for the implementation of their hydrogen factory in the projects Energieregion Stassfurt 2020 and Energieregion Ostharz. A regional energy plan was implemented in these projects to switch the energy supply in different sectors (power, gas, heat, and transportation) from fossil fuels to regionally produced renewables and renewable sector coupling systems were developed.

What a waste of green sustainable energy.

@Yoat, It depends on whether they use renewable energy that other users cannot take, or whether they just take whatever electricity they want to maximise plant usage.

This is the great conundrum with using green electricity to make H2 - do you only use power that no-one else wants (and get low capital utilisation), or run the system as much as you want, potentially using fossil derived electricity.

@SJC, sorry, I don't follow that.
Could you explain for the bewildered.
regards,
- JM

Brilliant! The best way to store wind and solar electricity.
Keep it up, and improve your efficiency.

I think you will "follow it" with some thought on your part.

SJC doesn't grasp the concept of Carnot efficiency, perhaps the simplest thing in thermodynamics.  Gibbs free energy?  It is to laugh.

EP,
You are so far off.
Start insulting some more, that will help. /s

All right, time for you to remove all doubt.  Describe to us just how you would convert a fossil plant to a fuel plant using waste heat.  Give us temperatures, mass-flow rates, basic engineering data.

That's the value of what you post here.  Nothing.