Researchers at the Korea Institute of Science and Technology (KIST) have developed a superionic halogen-rich Li-argyrodite (HRLA) that works well as a promising solid electrolyte (Li5.5PS4.5Cl1.5) in all-solid-state batteries without a decreased intrinsic electrochemical window in various electrode configurations.

This HRLA exhibits the highest Li-ion conductivity among Li-argyrodites (10.2 mS cm–1 at 25 °C, cold-pressed powder compact) reported so far and that delivers cell performance of 114.2 mAh g−1 at 0.5 C. A paper on their work is published in the ACS journal Nano Letters. 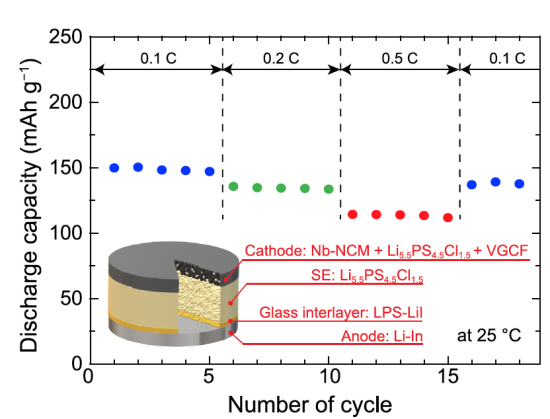 Dr. Hyoungchul Kim’s research team at KIST developed their solid electrolyte using a sulfide-based crystalline structure called argyrodite. Argyrodite is a crystal structure that was discovered in the mineral of Ag8GeS6 by Clemens Winkler in 1886. Recently, much research has been conducted on replacing cation sites with alkali metals such as Li and applying them to electrochemical devices.

Expectations were high for argyrodite utilization due to high Li-ion concentration and structural stability, but Li-ion conductivity remained below 4 mS/cm due to the structural uniqueness of Li-ions trapped in the octahedral cage in the argyrodite crystal.

The KIST research team developed a novel Li-ion pathway that crosses the octahedral cage by applying a technique for selectively substituting chlorine, a halogen element, at specific atomic positions.

In this study, there is great significance in developing a high-performance solid electrolyte material with excellent mass productivity. Synthesis of superionic sulfide materials through rapid process is very likely to be commercialized, and can be widely used in electric vehicles and energy storage system as a solid electrolyte in the future.

The research was supported by the Dual Use Technology Program of the Institute of Civil Military Technology Cooperation granted financially resources from the Ministry of Trade, Industry and Energy and the Defense Acquisition Program Administration. This work was also supported by the Institutional Research Program of the Korea Institute of Science and Technology and the Technology Development Program to Solve Climate Changes of the National Research Foundation funded by the Ministry of Science and ICT.

Are we getting closer to a Solid State Battery (ASSB)? Recently, researchers from Samsung Advanced Institute of Technology (SAIT) announced a high-energy long-cycling all-solid-state lithium metal batteries which also used an argyrodite solid state electrolyte.
The Samsung battery used a NMC cathode, though what is needed is a high energy cathode that has no cobalt or nickel. Maybe the inexpensive manganese cathode developed by Gerbrand Ceder, at Lawrence Berkeley National Laboratory, Berkeley
(https://ceder.berkeley.edu/publications/2020_ji_disordered_spinel_nature_energy.pdf) which achieved a high energy density, >1,100 Wh kg–1.

From your PDF link:

That is a lot of material, a manganese cathode would be good.

Sodium instead of lithium perhaps ? Most solid state research is thankfully focusing on both -John B. Goodenough seems now - at 97 - to be focused on both equally.
Paul G

- "Here the lithium compounds are compared to the previously known copper argyrodites and possible analogous sodium argyrodites due to the lower cost and higher earth abundance of sodium compared to lithium".
"Na7 PS6" may be the only practically accessible sodium argyrodite phase".
From: https://pubs.rsc.org/en/content/articlehtml/2015/cp/c5cp01841b
Paul G