HyperSolar, Inc., the developer of a technology to produce renewable hydrogen using sunlight and water (earlier post), is working with Suzhou GH New Energy Co. Ltd., a division of GCL Poly, in China to make the final modifications to the solar cells required to manufacture the Gen 1 hydrogen production panels to be used in demonstration pilot plants.

December, 2019 video of the operation of HyperSolar Gen 1 prototype. The panel produces oxygen on the catalyst in the frontside and hydrogen in the backside of the panel. The panel has a modular design that can be scaled up for a larger panel with the ability to change out individual cells.

While we have experienced some delays in processing due to COVID-19, the work in China is now ongoing. We have evaluated many suppliers globally and have found that our connection to Suzhou GH has been our best and most reliable option. Our relationship with them has also connected us to other high-quality and economical suppliers for the processing of the cells and building modules.

In 2019, China issued Patent No. ZL201580026002.0 allowing protection for HyperSolar’s intellectual property in China related to using multi-junction solar cells to produce hydrogen. To further support the economics of the new panel, there is currently no tariff on the solar cells the company buys from China.

In September 2019, HyperSolar announced that development of its Gen 1 hydrogen generation system had progressed to the point at which it could move from the lab to manufacturing engineering before full commercial production of the hydrogen panels. This in turn would lead the way to the company’s first pilot-scale solar-hydrogen farm. 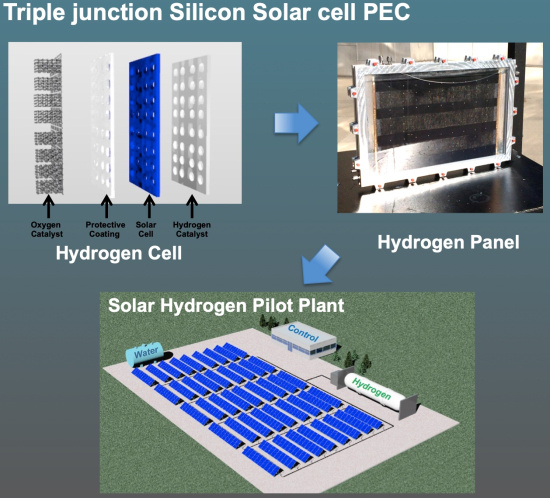 Key milestones required to reach that point included fine-tuning of chemical structure and application of protective coatings to extend the life of the hydrogen-generating cells. Additionally, the attachment of the catalyst and the mechanical alteration of the cells essential for more significant hydrogen generation and capture were refined to the point that it could be optimized for manufacturing.

In November of 2018, HyperSolar announced its intention to build a demonstration pilot plant; that became the focus of intensive effort in the laboratory as well as working with contract manufacturers and engineering firms for assembly and plant construction.

The pilot plant itself will be a full plug and play facility which will be initially designed with the Gen 1 technology. Gen 2 will use easily scalable low-cost electrochemical processing for manufacturing multi-junction nanoparticles for PEC production of hydrogen. The nanoparticle arrays will replace Gen 1.

As the company’s more advanced and efficient units come available, previous technology can be replaced without changing the plant infrastructure.

So this is for a dedicated solar hydrogen plant, not one that uses overflow solar energy from normal electricity generation.
So, when we want electricity, it will be generating H2, rather than electricity.
Do we want this ?
+ what is a "low-cost triple-junction silicon solar cell".
As far as I can see, triple junction costs are not low.
So the cost of h2 will not be low.
I don't get this.

Put the wind/solar electricity on the grid, sell contracts,
make hydrogen where ever you want at the points where you dispense it.

So the two comments before mine make no sense because it costs a ton of money to create electricity to make hydrogen via windmills or solar because you have to either take the energy from existing fields or create your own field which infrastructure alone would be expensive. Having a stand alone plant that makes its own Hydrogen without being connected to any other energy source would be cheaper in the long run for sure.

I don't see it being "cheaper".

So, when we want electricity, it will be generating H2, rather than electricity.
Do we want this ?
Maybe both, what about bifacial solar panels. Bifacial modules, as the name suggests, harvest energy from both the front and back sides of the module. The energy gain is largely dependent on the level of light reflected off the ground surface,
Triple-Junction Solar Cells can also be used with concentrators.
Check out this article, "Triple-Junction Solar Cell Characteristics and Optimization with a Fresnel Lens Concentrator" (https://www.hindawi.com/journals/ijp/2018/7285849/).

NREL now has a six junction cell with over 45% efficiency.

Having a stand alone plant that makes its own Hydrogen without being connected to any other energy source would be cheaper in the long run for sure.

Why try to integrate totally disparate functions?  There is no good reason to have an electrolytic cell hard up against a PV element, rather than having them separated by wires.  It's far easier to seal the PV away from things which might degrade or destroy it if it's only got to interface with a wire.

A dedicated H2 plant also cannot take advantage of synergies, such as selling electricity into the afternoon peak market.

Just because I'm writing to someone doesn't mean I'm writing for them.  They're not the only one reading, as you just proved.

Currently Battle Born batteries are ~ 1K$ a pop and you need a more than 2 to store power. For a house to function you need banks of them.
No idea what this costs but hydrogen tanks seem much cheaper and much less costly to manage than batteries. 1 tank for production and 1 for storage alternating between them for usage. Larger tanks could hold days of accumulated power. In total this may end up cheaper than Li-Ion + Solar cell home solution for power and as the cells get better and cheaper you need not change your storage solution.

You'd need a LOT of tank to store useful amounts of H2.