Based on company announcements to date related to operation scale-downs and closures, as well as national, provincial and local governmental measures, Roskill estimates that approximately 110Kt of mined LCE production could be lost over the course of 2020, due directly to actions taken to prevent the spread of COVID-19.

Using Roskill’s latest quarterly price forecast for lithium carbonate (published in late-March 2020), this equates to a value loss of approximately US$960 million. 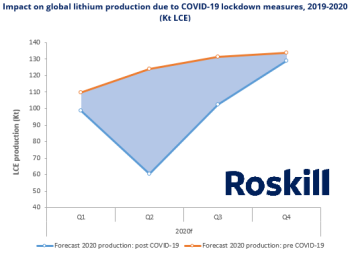 The majority of the loss in mined production will come in Q2 2020 as mineral operations in Australia are forced to scale down production or close entirely, with 53% of worldwide Q2 expected losses being attributed to these operations.

Roskill also noted that currently no Australian lithium mines have ceased production entirely, but have merely scaled down due to reduced workforces or other quarantine measures.

In South America, brine operations have been much less affected. Livent announced on 6 April that it would be re-opening its Hombre Muerto operation, while Orocobre has indicated that its Olaroz operation will be able to re-open, with limited activity, in the coming weeks. However, production losses in Argentina are likely to be approximately 35% in 2020, as already delayed expansion plans become delayed further, Roskill said.

In Chile, SQM has stated that COVID-19 prevention measures have, so far, had “no material impact” on operations, with other facilities in the Atacama presumed to have seen a similar effect. Roskill anticipates 2020 production losses in Chile to be kept below 20%.

More in-depth analysis of the short-term impacts to the lithium industry, as well as Roskill’s long-term outlook for lithium supply, demand and prices, can be accessed via the Roskill Interactive portal, as part of a subscription to Roskill’s latest lithium market outlook report Lithium: Outlook to 2028, 16th Edition.