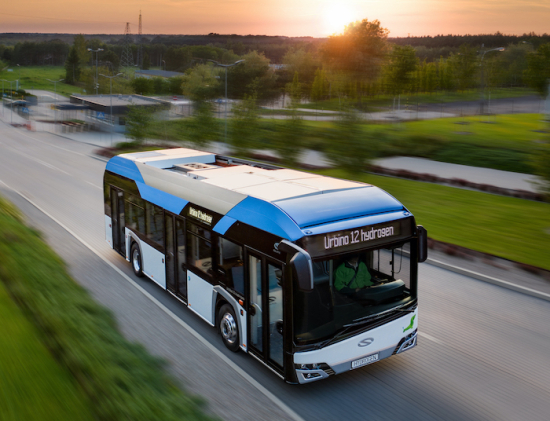 The 20 hydrogen Solaris buses will be delivered by the end of 2021. Concurrent with the sales of buses, the parties signed a servicing agreement for 12 years.

Connexxion is a branch of the Transdev Netherlands group—one of the biggest operators and a leader in emission-free public transport in the Netherlands. As of the end of next year the operator Connexxion will utilize hydrogen buses in Hoekse Waard and Goeree-Overflakkee regions.

The Solaris Urbino 12 hydrogen buses use a set of fuel cells with a power of 70 kW. The compressed hydrogen is stored in 5 new-generation tanks placed on the bus roof. The set of type 4 composite tanks, placed longitudinally above the first axle of the vehicle, has a total volume of 1560 liters.

The bus is also fitted with a Solaris High Power battery which acts as an additional electric power storage facility.

Pursuant to the specification, the hydrogen buses contain 37 seats and doors arranged in 1-2-0 configuration. Additional comfort to passengers will be provided in the new buses in the form of low entries, USB ports, air conditioning, readable information displays and a wheelchair space. Better visibility for the driver will be ensured by a special camera system, replacing wing mirrors, projecting the image into screens inside the vehicle.

Refueling of hydrogen buses will be possible in Heinenoord, in the vicinity of the bus depot. Private passenger cars will also be allowed to use the infrastructure. The initiative aims at promoting the exploitation of the environmental friendly hydrogen to a full extent.

Last year, Italian operator SASA Bolzano placed an order with Solaris for 12 hydrogen buses, and a few weeks ago the German operators WSW Mobil GmbH from Wuppertal and RVK from Cologne ordered a total of 25 hydrogen Solaris buses.