Karma Automotive is expanding its Revero series with a new model, the Karma Revero GTE. The GTE will be the company’s first all-electric vehicle. 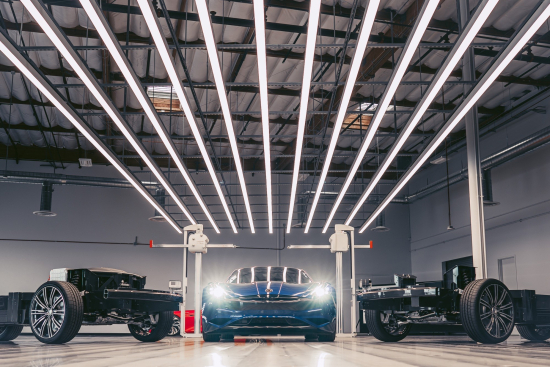 The Revero GTE will join the GTS, GT and original Revero as the fourth model in Karma’s Revero family, initially offering two versions—both 200-mile and 300-mile range configurations. Later in the year, a 400-mile (estimated) hyper-range version will be available.

Together, the GTE lineup will offer ultimate customer choice of ranges. Likewise, the new model will feature the company’s design language, while offering optimal levels of performance, technology and signature luxury features.

The new 2021 Revero GTE is targeted to deliver 0-60 mph acceleration in less than 3.9 seconds and feature electronic torque vectoring. The vehicle will be offered in two models; a standard range option of approximately 200 miles total range with a 75kWh NMC (Nickel Manganese Cobalt) lithium-ion battery, and an extended range with 300 miles total range and a 100kWh NMC battery.

Using DC 150kW Fast Charging, GTE will reach 80% charge in under 30 minutes. Through AC charging at 11kW, the GTE will achieve a full charge overnight. Additional details on the hyper-range version will be available at a later date.

Like its predecessors, the Revero GTE will be assembled largely by hand at Karma’s Innovation and Customization Center (KICC), the company’s manufacturing facility in Moreno Valley, Calif. Intended for further availability later in the Fall of 2021 in China and Europe, the Revero GTE was developed, styled and engineered at the company’s Irvine, CA headquarters. Karma Automotive will open a preorder process on karmaautomotive.com in coming months, with market-availability scheduled for Spring 2021.

Range based on what cycle and trims at what prices? I'm bewildered by how this company is still around. The specifications look slightly better than the 2012 Tesla Model S, but arriving almost a decade later.