Audi has introduced the second generation of its A3 Sedan. The compact four-door model offers three powertrains at launch: two TFSI versions (one with a 48V mild-hybrid system) and one TDI diesel. 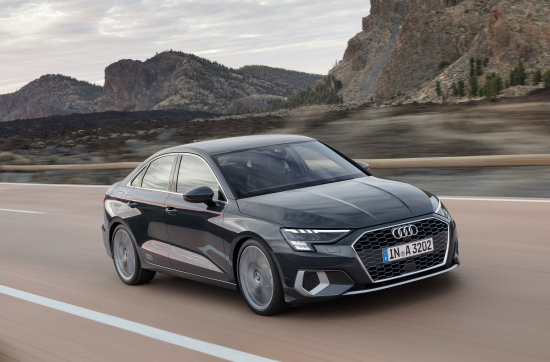 Besides the cylinder-on-demand technology, the powertrain in conjunction with the S tronic dual-clutch transmission uses a 48-volt mild hybrid system. It recovers energy during deceleration, supports the engine with up to 50 N·m (36.9 lb-ft) of torque when driving off and accelerating from low engine speeds and allows the A3 Sedan to coast with the engine switched off in many situations. In everyday driving, it reduces consumption by up to 0.4 liters (0.1 US gal) per 100 kilometers (62.1 mi).

The A3 Sedan will be on the lots of European dealerships beginning in summer 2020.

The aerodynamics benefit from the higher rear end compared with the predecessor as well as the large diffuser. As a result, the new A3 Sedan with the 2.0 TDI 110 kW (150 PS) achieves a Cd value of 0.25 and is therefore 0.04 Cd points better than the first generation. The controllable cooling-air inlet with two electrically actuated louver modules behind the Singleframe also contribute to this. They regulate the flow of air intelligently and according to the situation. In addition, the paneled underbody, the exterior mirrors with improved aerodynamics, and the active brake cooling reduce air resistance and make for a streamlined vehicle.

The top infotainment system in the new A3 Sedan is the MMI Navigation plus, which uses the third-generation modular infotainment platform (MIB 3). The MIB 3 boasts computing power ten times higher than in the predecessor model, connects the car via LTE Advanced speed, and connects the smartphones of the passengers to the Internet via Wi-Fi hotspot. The MMI Navigation plus offers a multitude of Audi connect services as standard, including online traffic information, news, and additional information such as photos, opening times, and user reviews relating to points of interest.

Car-to-X services that make use of the swarm intelligence of the Audi fleet are also part of the portfolio. They report hazardous areas or speed limits, for example, to vehicles with the corresponding equipment or find free parking spaces at the side of the road. If the car is switched off, the myAudi app continues navigation from the car on a smartphone. This way, customers reaches their destination directly.

The A3 Sedan is also connected to the smartphone via the Audi smartphone interface, which integrates iOS and Android cell phones with Apple Car Play and Android Auto in the MMI, as well as via Audi phone box. The latter connects the device to the car antenna and can charge it inductively. What is more, the A3 Sedan can be locked and unlocked as well as started via an Android smartphone with the Audi connect key. Personalization allows up to six users to store their preferred settings in individual profiles, including those for the seat, climate control and media. The DAB+ digital radio comes as standard. Options include online radio and the hybrid radio, which automatically switches between FM, DAB, and the online stream depending on a station’s signal strength, thus ensuring optimum reception. Beginning in the middle of the year, the Amazon Alexa voice assistant will complement the offering.

The suspension of the new A3 Sedan is a touch more precise than in the predecessor model. To a large degree, this precision and reaction speed is due to the central dynamic handling system that ensures optimal interaction between all the components relevant to the transverse dynamics. As an alternative to the standard setup, there is a sport suspension and a suspension with controlled dampers. The latter offers a wide spread between highly comfortable roll motion and agile handling.

The Audi drive select dynamic handling system also allows the driver to experience different levels of suspension tuning in the A3 Sedan—from comfort-oriented and distinctly dynamic right through to particularly fuel-efficient. This also brings about changes in the characteristics of the throttle response and the progressive steering, for example, which varies its ratio depending on the steering angle.

Looks pretty cool.
A CD of 0.25 is very impressive - it would be a good autobahn / motorway cruiser.
Bit pricey, though.

Now we can see why most focus in engine development is on gasoline today. There is some homework to do in this field...

NOx is a concern with diesels.

@SJC, I would have thought NOx is a solved problem in the last year or so.
(It certainly was a huge problem up to 2016/7)