The new BEV car configurator includes solutions identified in ArcelorMittal’s latest S-in motion studies into the body-in-white (BIW) and battery pack of electric vehicles. All of the solutions have passed extensive assessments including global crash test models, and simulations of forming feasibility, and assembly. 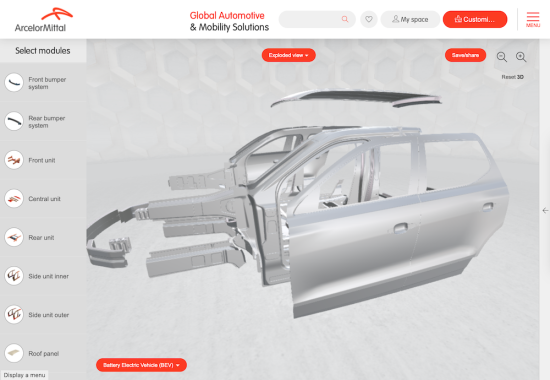 As usual for S-in motion studies, multiple solutions are identified wherever possible to ensure that the preferences of individual OEMs are accommodated. For example, the S-in motion Battery Pack concept includes design options with a tray, without a tray, and different material strategies are considered.

In the past, weight saving for BEVs was not really seen as very important, mainly because energy could be recovered during braking. Today, BEV manufacturers are convinced that lightweighting remains a major topic for BIW design.

There are several drivers which make weight saving attractive, the most important being the driving range and the environmental impact of the materials, said Favero.

Even if there is energy recovery while braking, losses will occur. A lighter mass will reduce the overall amount of energy needed to move the car and improve performance parameters such as acceleration and handling. And if we reduce the mass of materials, we directly reduce the emissions that are caused by the production of these materials.

BEVs are already several hundred kilograms heavier than their ICE counterparts due to the weight of the batteries and the reinforcement required to keep vehicle occupants safe. As a result, there is much more energy to absorb in the event of a crash.

This shows that there is more room for top AHSS products with best-in-class crash ductility and formability. For example, ArcelorMittal offers AHSS products such as Usibor 2000 and Ductibor 1000 which are suitable for hot stamping, or Fortiform for cold stamping. As BEVs are more expensive to produce, mainly due to battery costs, AHSS like these remain the optimal solution to reach the OEM’s cost, performance, and environmental targets. 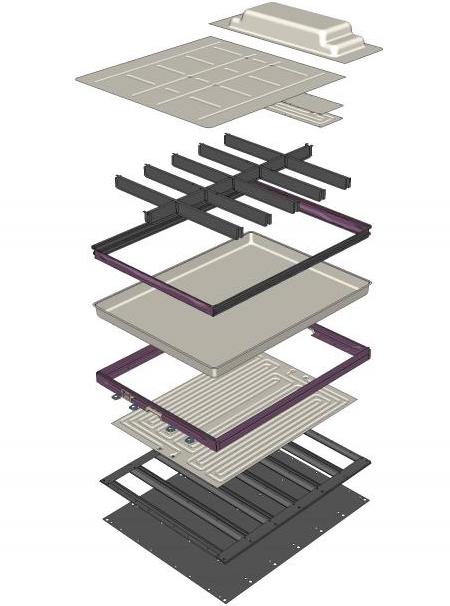 The range of a battery electric vehicle has been proven to be one of the most important criteria for car buyers. OEMs are developing strategies to increase range, often by maximizing the space available for batteries. That limits the space initially for energy absorption in the case of a crash.

As a result, the anti-intrusion performance of the vehicle’s body sides must be reinforced strongly to protect passengers in a side crash. The S-in motion Battery Pack study identified MartINsite, a roll-formable martensitic AHSS, as the best and most cost-effective solution for these applications.

New emissions legislation targets full vehicle lifecycle. Environmental targets are expected to become more important in coming years as the impact of vehicle emissions moves from the tailpipe to include the full lifecycle of the vehicle. By 2023, the European Commission wants to establish a common methodology to assess the CO2-equivalent (CO2-eq) emissions of a vehicle over its life. The methodology is expected to be included in European legislation from 2030. Other regions and countries are likely to follow this lead.

It is a fact that steel has the lowest CO2-eq per part compared to alternative materials including aluminum. For the BIW, the CO2 emissions associated with an automotive part made of AHSS are less than half of those of an equivalent aluminum part, and less than a third of a part made from carbon fiber reinforced plastic. In addition, steel is 100-percent recyclable. That means steel will remain the essential material in a sustainable circular economy because of its life cycle analysis (LCA) benefits.

ArcelorMittal plans to significantly reduce its global production of carbon dioxide emissions, with the aim of being carbon neutral by 2050. An interim target for Europe by 2030 is to cut carbon emissions by 30% to contribute to the European Commission’s ‘Green Deal’.

They should say how much weight they might expect to save, and how much this would improve the performance of an EV.
They could pick a few examples: E Golf, Kona, Mini to make it easy to understand.
Are we talking about 20 Kg/vehicle, 50, 100 ?
+ if you make an EV lighter, what does this do to its km / kWh figure?
For instance, if you take 50Kg off a 1500Kg EV, what does this do to the range, if it had a 40 KwH battery.

Study shows that light weight does not benefit EVs

If you really understood the law of conservation of matter and energy, you wouldn't rely on the on the results of a study that some jerks produced.

Accelerating a heavy car from a stop takes more energy.
A lighter car can get more city range.