Canada-based DeepGreen Metals Inc., a company focused on sourcing metals with the least environmental and societal impact, has released the results of a year-long study it commissioned into the impacts of sourcing metals to produce battery cathodes and wiring for electric vehicles (EVs).

Demand for certain EV battery metals is projected to increase by 11 times the current level by 2050, according to the World Bank, and shortages in nickel, cobalt and copper have been predicted to emerge as soon as 2025.

At a high level, the findings suggest that, compared to mining the land for battery metals, sourcing the needed metals from ocean nodules can deliver: 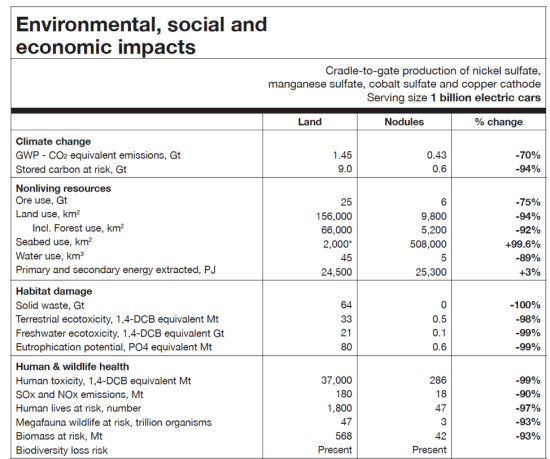 The oceans are filled with metals, presenting as seafloor massive sulfides (SMS), cobalt crusts, polymetallic nodules and seabed sediments. They have never been mined on a commercial scale, and plans to develop these ocean resources have been met with opposition from ocean-conservation NGOs concerned about disruptions to seabed ecosystems and inhabitants. For the purposes of this report, we chose to focus on polymetallic nodules for several reasons: (1) nodules sit unattached on the ocean floor in the area of the South Pacific international waters known as the Clarion-Clipperton Zone (CCZ), which means they can be collected without the need for destructive rock cutting required for mining SMS and cobalt crusts; (2) nodules are high grade and do not contain toxic levels of heavy elements, and the metal contents of the nodules is uniquely aligned with the base metal needs of EV battery manufacturers; (3) the CCZ nodule resource alone contains enough metals to electrify the global EV fleet several times over.

—“Where Should Metals For The Green Transition Come From”

Polymetallic nodules are hard, compact lumps of matter formed through precipitation and interactions of water contained in seafloor sediments (pore waters) and more oxidized seawaters. The process occurs over millions of years and is consistent over wide areas, with very large, high-grade deposits having been defined. Because of the consistency of the process, polymetallic nodules have remarkably consistent abundance and metal contents over large areas. 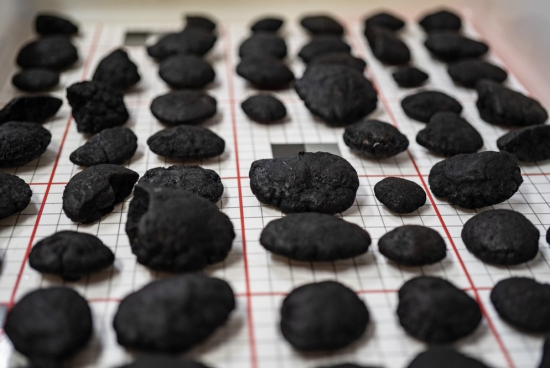 Because nodules sit unattached in the top layer of sediment on the seafloor, their removal does not require blasting, drilling, or excavating—they simply need to be collected from the seafloor.

The CCZ is one of the four deep-ocean seabed areas known to contain large quantities of nodules. The CCZ is an abyssal plain spanning 4.56 million square kilometers in the Pacific Ocean roughly 500 miles south of Hawaii. Polymetallic nodules found in the CCZ contain the four base metals critical for EV battery production in a single ore body.

To collect nodules, an offshore collection system with surface production vessels, a vertical lift system, and seabed collection machines. Compared to land mining, which requires construction of roads for transporting equipment, rock, and ore, as well as trenches, pits, and tunnels for mining, nodule collection requires no fixed infrastructure. 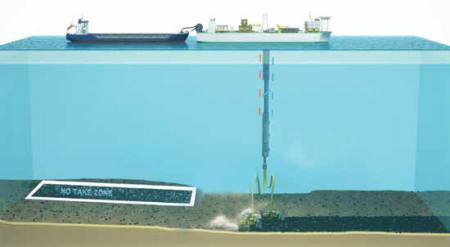 However, the authors note, nodule collection disturbs a large area of the deep seafloor ecosystem through three main mechanisms: 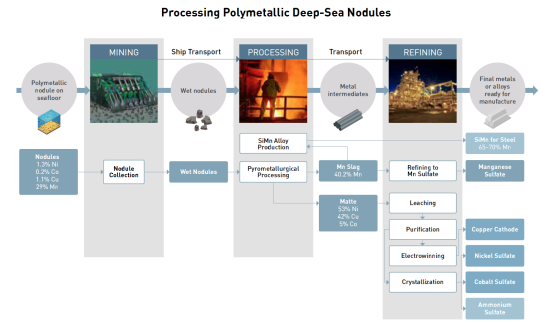 From: “Where Should Metals For The Green Transition Come From”

Ocean nodules are a unique resource to consider at a time when society urgently needs a good solution for supplying new virgin metals for the green transition. Extraction of virgin metals—from any source—is by definition not sustainable and generates environmental damage. It’s our responsibility to understand the benefits—as well as the damages associated with sourcing base metals from nodules.

The study provides an in-depth comparison of the cradle-to-gate impacts of producing metals from land ores and polymetallic nodules, both sources of the nickel, cobalt, copper and manganese required to build one billion EV batteries. The researchers examine the relative impacts of the extraction, processing and refining of these key base metals on several impact categories, including: greenhouse gas emissions and carbon sequestration, ecosystem services, non-living resources and habitats, biodiversity, human health and economics.

In our opinion, the paper provides a comprehensive consideration of the environmental, social and economic impacts associated with land and deep-sea mining of metals used in electric vehicles.

—Todd Cort, co-director of the Yale Center for Business and the Environment and Cary Krosinsky, lecturer in sustainable finance at the Yale School of Management

Polymetallic nodules are made of almost 100% usable minerals and contain no toxic levels of deleterious elements, compared to ores mined from the land which have increasingly low yields (often below 1%) and often do contain toxic levels of deleterious elements. This means that producing metals from nodules has the potential to generate almost zero solid waste and no toxic tailings, as opposed to terrestrial mining processes which produce billions of tonnes of waste and can leak deadly toxins into soil and water resources.

While the deep seabed is a food-poor environment with limited biomass, uncertainties remain over the nature as well as temporal and spatial scales of impacts from nodule collection on deep-sea wildlife. The study provides the broader context for a deeper, multi-year environmental and social impact assessment (ESIA) being conducted by DeepGreen, in what the company says will be the largest integrated seabed-to-surface deep-ocean science program ever conducted, with more than 100 separate studies being undertaken.

DeepGreen has partnered with three pacific island states for deep-sea environmental studies, mineral exploration and project development. Through these relationships with the Republic of Nauru, the Republic of Kiribati and the Kingdom of Tonga, DeepGreen has exclusive rights under the International Seabed Authority to explore for polymetallic nodules in regions of the Clarion Clipperton Zone of the Pacific Ocean.

In October DeepGreen derived its first metal from polymetallic nodules in a processing lab, and in March, the company’s partner Allseas acquired a former drill ship to convert to a polymetallic nodule collecting vessel. Earlier this month the company announced the acquisition of Tonga Offshore Mining Limited (TOML), giving DeepGreen access to a third seabed contract area in which to explore for battery metals with significantly lower environmental and social impact.

In the early 1970's, Hughes built the Glomar Explorer that was supposed to recover manganese modules off the ocean floor in a depth of about 16,000. At the time, one of my smart friends told me that this did not make any sense. He had calculated that cost of the energy alone was more than the value of the minerals. Of course, my frend was correct and this was just a somewhat reasonable cover story. The real purpose of the Glomar Explorer was a CIA project to recover a Soviet nuclear missile sub that had sunk to this depth. They succeeded in recovering part of the sub but supposedly most of broke up while it was being lifted and resank.

The above article makes me wonder if the economics of nodule mining have changed or if maybe my friend only took account of the value of the manganese and not the cobalt and nickel. Interesting!