A new report from the Road Ecology Center at the University of California, Davis has found that total US vehicle miles traveled (VMT) at the county and state level have declined by 61% to 90% following the various government stay-at-home orders in response to the COVID-19 pandemic.

Using data from StreetLight, the researchers estimated changes in daily vehicle miles traveled across the US before and after government shelter-in-place guidance. The difference amounted to a drop from 103 billion miles in early March to 29 billion miles during the second week of April. All states reduced their vehicle miles traveled by at least 60%.

The authors used the VMT data to calculate that emissions of US greenhouse gas (GHG) emissions were reduced by 4% in total and by 13% from transportation in the almost 8 weeks since many stay-at-home orders went into effect. This puts the US on track to meet its annual goals for GHG reduction under the Paris Climate Accord.

California has a target of 80% reduction in GHG from 1990 levels by 2050. If traffic remained reduced for one year, the reduction in VMT would allow California to meet half of its 2050 climate change target. 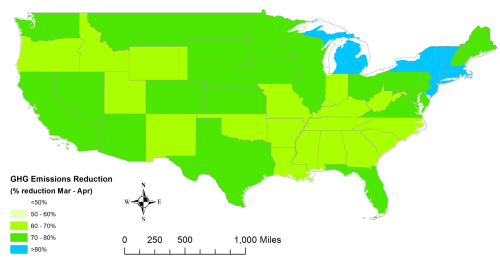 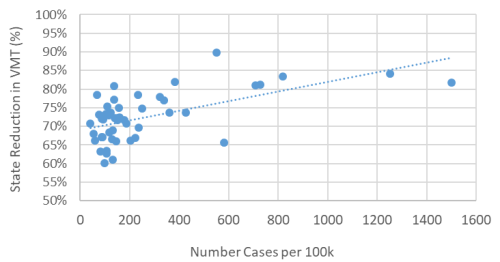 State-level relationship between reduction in VMT (%) and the number of cases per 100,000 people.(UC Davis Road Ecology Center)

In California, where vehicle miles dropped more than 75%, the state’s fuel-tax revenue under Senate Bill 1 (2017) also plummeted from $61 million in early March to $15 million for the second week of April. For an eight-week, stay-at-home order, the loss to the state is an estimated $370 million in funds that support highway construction, maintenance and transit improvements aimed at reducing emissions.

The study acknowledges that the emissions benefits of stay-at-home orders could go away once normal activity resumes.