Study estimates fuel economy improvements to US light-duty vehicles from 1975–2018 saved 2T gallons of fuel, 17B tons of CO2

A team from the University of Tennessee and the National Renewable Energy Laboratory (NREL) has the fuel savings due to fuel economy improvements over the past 43 years amount to approximately two trillion gallons of gasoline.

They further estimated that roughly one-fifth of the savings can be attributed to gasoline price increases over the period and four-fifths to fuel economy and greenhouse gas (GHG) standards. Their paper is published in the journal Energy Policy. 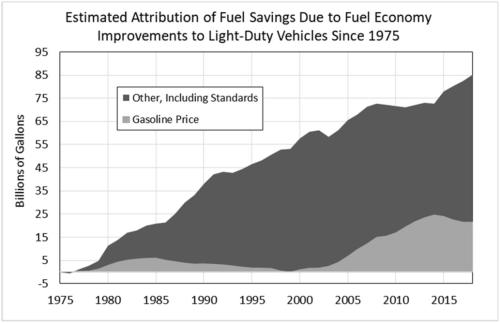 Since 1975, the test-cycle fuel economy of light-duty vehicles (passenger cars and light trucks) sold in the U.S. has almost doubled. Also since 1975, light-duty vehicle travel increased by 134% while fuel use increased by only 37%. Fuel economy improvements on laboratory tests gradually became real improvements on the road as newer, more efficient vehicles were added to the vehicle population and older less efficient ones were retired. Fleet-wide fuel economy gains produced large fuel savings. However, quantifying the fuel savings is challenging due to the mapping from test-cycle to on-road fuel economy and the dynamic response of driving behavior to changes in fuel economy (i.e. the rebound effect).

The authors used a three-step method:

17 billion tons of CO2..
That is impressive.