The Australian Government has established funding to support hydrogen-powered projects. The A$300 million (US$193 million) Advancing Hydrogen Fund will be administered by the Clean Energy Finance Corporation (CEFC).

As an early priority, CEFC will seek investment in projects included in the ARENA Renewable Hydrogen Deployment Funding Round. The ARENA round is a $70-million grant program aiming to demonstrate the technical and commercial viability of hydrogen production at a large-scale using electrolysis.

Hydrogen has the potential to make a substantial contribution to our clean energy transition, reducing emissions across the economy while underpinning the development of an important domestic and export industry.

Renewable hydrogen can enable the deep decarbonization of notoriously difficult-to-abate sectors, particularly in transport and manufacturing, while accelerating the contribution of renewable energy across the economy.

CEFC finance remains central to filling market gaps, whether driven by technology, development or commercial challenges. We are confident we can use our capital to help build investor confidence in the emerging hydrogen sector, which is an exciting extension of our investment focus. 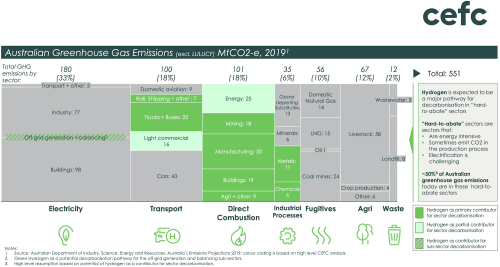 Emissions reduction potential. Current hydrogen technologies represent the most credible pathway to the decarbonization of “hard-to-abate” sectors—including those which produce emissions in the production process and/or lack scaleable electrification options. Together, these sectors are responsible for driving approximately 30% of Australia’s greenhouse gas emissions. Source: CEFC

Through the Advancing Hydrogen Fund, the CEFC expects to provide either debt or equity finance to eligible larger-scale commercial and industrial projects, typically requiring $10 million or more of CEFC capital. CEFC investments typically include co-financiers and/or equity partners where possible.

Accelerating the transition to green ammonia, produced using renewable energy, represents a sizeable abatement opportunity for Australia, with the potential to position Australia as a leading global producer and exporter of green ammonia.

Hydrogen is an extremely versatile energy carrier which is gaining significant support worldwide as the fuel of the future. We see green hydrogen as offering the most credible pathway to decarbonisation for high emitting sectors and those which lack scaleable electrification options. Together, these sectors are responsible for driving some 30 per cent of Australia’s greenhouse gas emissions.

In considering investment proposals for the Advancing Hydrogen Fund, the Mandate directs the CEFC to prioritize projects that promote the objectives of the National Hydrogen Strategy and that focus on one or more of the following:

CEFC finance for the hydrogen sector has the potential to deliver significant benefits:

ARENA and the CEFC have previously worked together to accelerate clean energy developments, including through the successful large-scale solar funding program. The program delivered grant and/or debt finance to 12 developments contributing to large-scale solar becoming cost competitive with wind energy and cheaper than new build coal and gas.

using electrolysis...
They will have lots of oxygen for the countries needs.