First Cobalt Corp. announced positive results from an independent feasibility study conducted on its permitted cobalt refinery in Ontario, Canada. The study contemplates expanding the existing facility and adapting it to be North America’s first producer of cobalt sulfate, an essential component in the manufacturing of batteries for electric vehicles. 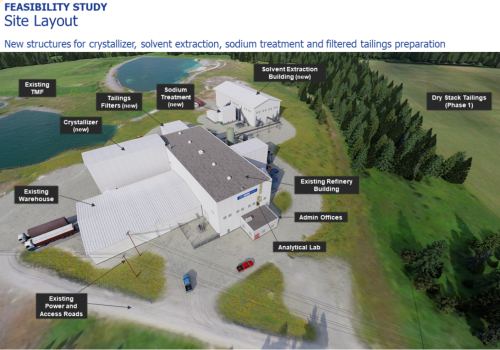 The feasibility study demonstrates that the First Cobalt Refinery project can become a viable, globally competitive player in the North American and European electric vehicle (EV) supply chain. The study reinforces the strength of First Cobalt’s business strategy for a rapidly evolving EV market that is heavily dependent on supply from China.

This is an important milestone in our efforts to disrupt the existing cobalt supply chain. The study shows strong asset-level economics that position the refinery to be competitive globally and provide attractive investment returns. The outlook for electric vehicles and the push by automakers to develop shorter supply chains creates an excellent opportunity. With most of the world’s cobalt refining capacity located in China, there is strong demand for a North American alternative. Our focus will now turn to working with Glencore, our strategic partner, on implementing a new, ethical and transparent supply chain.

Highlights of the study results include:

Cobalt market. According to a report commissioned from Benchmark Mineral Intelligence, there are currently no plans to commission new cobalt refineries outside of China other than First Cobalt’s. They also note that most automotive companies outside of China are interested in sourcing cobalt sulfate closer to their manufacturing facilities or from suppliers located outside of China.

Other key findings in the Benchmark Mineral Intelligence report are as follows:

Benchmark notes that demand for cobalt in lithium-ion batteries will dominate all other demand categories and forecasts a structural deficit within the next five years.

Project overview. The First Cobalt Refinery is a hydrometallurgical cobalt refinery located north of Toronto, Canada. The facility was permitted in 1996 with a nominal throughput of 12 tonnes per day (tpd) and operated intermittently until 2015, producing a cobalt carbonate product along with nickel carbonate and silver precipitate. The facility is located on 120 acres, with two settling ponds and an autoclave pond. The current footprint also includes a large warehouse building that once housed a conventional mill.

Testing of third-party cobalt hydroxide in 2019 using the refinery flow sheet confirmed suitability of cobalt hydroxide as a source of feed to produce a high purity, battery-grade cobalt sulfate.

In July 2019, First Cobalt and Glencore AG agreed to a partnership framework providing for a non-dilutive, fully funded, phased approach to recommission the refinery. Subject to certain conditions, including the completion of a positive feasibility study and agreement upon commercial terms, the framework agreement contemplates that First Cobalt will treat cobalt feed material supplied from Glencore’s DRC operations for an initial term of up to 4½ years on a tolling basis, with Glencore providing up to 100% of the capital required to recommission and expand the facility. The objective is to produce approximately 25,000 tonnes of cobalt sulfate per annum for the electric vehicle market.

The strategic objective of the partners is to achieve 5,000 tonnes per annum of cobalt production (55 tpd nameplate, 50 tpd average), which would account for approximately 5% of the current global refined cobalt market and an even larger share of the cobalt sulfate chemical market.

In conjunction with the feasibility study, discussions have been ongoing with potential automotive offtake partners as well as several lenders interested in providing a portion of the capital cost along with Glencore.

The feasibility study assessed the project economics of the refinery on a stand-alone basis, assuming a 70% payability factor on the cobalt content of a cobalt hydroxide feed source based on expert forecasts for future payability levels (today’s spot payability is 62-65%).

In order to secure the capital required and a reliable feed source, First Cobalt and Glencore will use the results of this study to negotiate terms of a two- to five-year tolling agreement and financing arrangement. As such, the cash flow generated from the refinery will be shared between the parties and remains subject to ongoing discussions.

Refinery design. The First Cobalt Refinery sits on a 40-acre land package and includes the refinery building complex, one tailings pond (the Autoclave Pond) and two water treatment ponds (the “Upper” and “Lower” ponds). The main refinery gallery in the building complex houses the pressure oxidation circuit, solvent extraction circuit (SX), product filtration and a control room. The main building also includes a laboratory, administrative offices and changerooms. Other structures attached to the main gallery include a warehouse which previously housed a conventional milling circuit, a Merrill-Crowe building, a mechanical shop and a High-Density Sludge (HDS) building. There is also an external tank farm located along the north side of the complex. The feasibility study criteria were to make the best use of existing infrastructure while keeping as much as possible within the current footprint.

The proposed new layout adds two new simple engineered structures to the main complex; one for tailings belt filters and the other for crystallization and product bagging. A new external building is also contemplated to house an expanded SX circuit and sodium management infrastructure. Other changes to the site layout include additional tankage for reagent storage in the tank farm area and improvements to the ring-road around the refinery to accommodate transport trucks.

An 80-acre property located to the north is owned by First Cobalt and it will be the location of a new dry stacked tailings management facility. Tailings from the process are a gypsum that can be readily dewatered and stacked for permanent dry storage. First Cobalt has the advantage that the field to the north is underlain by more than 6 metres of clay, some of which will be excavated to increase storage capacity, with the excavated clay being reused to construct the new tailings storage facility and permanently rehabilitate the Autoclave pond and the new tailings facility at end of Project. Only half of the field to the north is planned for the new tailings management facility, which will have approximately 17 years of storage capacity. The other half of the field remains available to be developed as additional storage for an additional 17 years of operation. The existing Upper Pond will be expanded to collect surface water from freshet and summer storm events for safe return to the environment.

Retrofitting of the existing buildings and equipment, new construction and installation of new equipment is expected to take approximately 12 months.

Cobalt hydroxide feed is expected to arrive at the Port of Montreal via ocean freight where it will be transferred onto rail cars to be delivered to a siding on the Ontario Northland railway in Cobalt, Ontario. The Ontario Northland rail line passes 2 km west of the Refinery Road. Hydroxide feed will be trucked from the rail siding to the Refinery and refined cobalt sulfate product will be backhauled to the siding for reloading onto rail cars for shipment to end markets.

Process and metallurgy. Cobalt hydroxide feed material will arrive in bulk bags and be unloaded into the refinery warehouse. The bulk bags will be lifted with the refinery’s overhead crane, where the bags will be emptied into a re-pulping system. The slurry is then pumped to a leach circuit where it is leached with sulfuric acid under atmospheric conditions.

Slurry exiting the leach tanks is pumped to the neutralization circuit where limestone is added in order to raise the pH and precipitate impurities such as iron. To minimize downstream scaling, the slurry is cooled to 30-35°C in a cooling tower which reduces soluble gypsum content. The precipitated solids are removed through thickening and filtration. 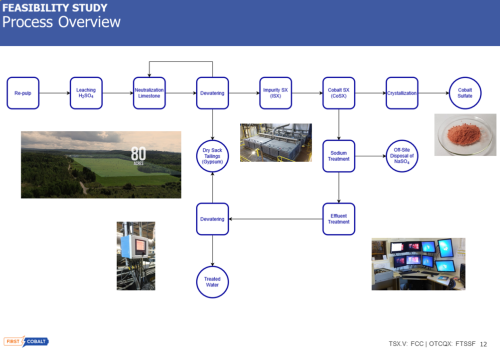 Prior to solvent extraction (SX), the solution is re-heated to raise gypsum solubility and prevent subsequent precipitation in the mixer settlers. The first SX circuit is Impurity SX (ISX), targeting the removal of impurities such as manganese, copper, zinc, calcium, and iron. The extraction raffinate after this step primarily contains cobalt, with nickel and magnesium present as impurities. The strip liquor reports to effluent treatment, where the impurities are precipitated and removed from solution prior to discharge.

The second SX circuit is Cobalt SX (CoSX) which loads cobalt onto the organic solvent while any residual impurities remain in the aqueous phase. The cobalt-loaded organic then proceeds to the scrubbing mixer-settlers where the pH is adjusted to remove impurities such as magnesium and nickel that were loaded in the extraction stage. The scrubbed organic goes to a final stripping stage where the pH is lowered to bring the cobalt out of the organic phase and into the aqueous strip liquor stream. Once filtered to remove entrained organic, the strip liquor enters the crystallization step.

The filtered strip liquor is pumped to a mechanical vapor re-compression forced circulation crystallizer. The crystallizer functions by evaporating water using steam in a heat exchanger, supersaturating the cobalt-rich strip liquor and causing crystallization to occur. The bleed stream of cobalt sulfate crystals reports to a thickener and centrifuge for dewatering. Together they separate the solid and liquid components of the slurry, producing a dewatered product at <3% free moisture. The centrifuged crystals then report to a fluid bed dryer to reduce the moisture content of the crystals to below 0.2% w/w. Once dried, the final product is bagged and is ready for onward shipment to the end customer.

Water management. Process water from the refinery will be treated to a level that meets or exceeds regulatory requirements before being returned to the environment. Environmental testing and design by First Cobalt’s consultants have devised a treatment process to ensure that the return of process water to the environment is done in a compliant and environmentally friendly manner. Broadly speaking, there are two main criteria that must be met before water can be discharged. First, metals and other elements as prescribed cannot exceed predetermined thresholds. Second, the water being discharged should not be acutely toxic to aquatic life.

Owing to the use of sodium hydroxide in the process flowsheet that has been designed, effluent from the refining process would have an elevated concentration of sodium. There are no federal or provincial discharge limits nor surface water quality objectives or guidelines for sodium. However, it was determined that the amount of sodium in the effluent could be toxic to aquatic life. In order to satisfy the requirements of a feasibility level study, the study contemplates installing an established technological solution of evaporation and crystallization to remove sodium content.

The evaporation and crystallization technology is proven to be effective for removing sodium from the effluent but it is more expensive than other alternatives. In this process, the effluent stream is first concentrated by evaporation to reduce the volume reporting to the crystallizer. The resulting brine is then fed to a sodium crystallizer in which a crystalline sodium sulfate product is formed. This crystalline product is sent for offsite disposal.

First Cobalt identified a number of other solutions for managing the sodium that could significantly reduce capital and operating costs, including substituting sodium-based reagents for alternatives not containing sodium, making process changes or implementing other management solutions to reduce the sodium concentration in the effluent. Due to time constraints, Ausenco recommended that the study incorporate a well-established treatment process and that alternatives be more fully assessed over the next few months.

The capital cost for the selected method is $9.4 million representing almost 17% of the total capital cost. The operating cost associated with the selected method is $0.85/lb Co produced representing 31% of the total operating cost. First Cobalt and its consultants believe that there is significant opportunity in other sodium management methods that were reviewed but not in sufficient detail to be incorporated into this feasibility study.

Next steps. First Cobalt expects to continue to advance and de-risk the project in 2020 by pursuing the following activities:

Posted on 06 May 2020 in Batteries, Manufacturing, Materials | Permalink | Comments (0)