A team of researchers at the Institute of Technological Sciences at Wuhan University has demonstrated a prototype design of a propulsion thruster that utilizes air plasma induced by microwave ionization. Such a jet engine simply uses only air and electricity to produce high temperature and pressurized plasma for jet propulsion.

An open-access paper on their work is published in the journal AIP Advances.

The motivation of our work is to help solve the global warming problems owing to humans’ use of fossil fuel combustion engines to power machinery, such as cars and airplanes. There is no need for fossil fuel with our design, and therefore, there is no carbon emission to cause greenhouse effects and global warming.

Beyond solid, liquid and gas, plasma is the fourth state of matter, consisting of an aggregate of charged ions. It exists naturally in places such as the sun’s surface and Earth’s lightning, but it can also be generated. The researchers created a plasma jet by compressing air into high pressures and using a microwave to ionize the pressurized air stream.

This method differs from previous attempts to create plasma jet thrusters in one key way. Other plasma jet thrusters, such as in NASA’s Dawn space probe, use xenon plasma—which cannot overcome the friction in Earth’s atmosphere—and which are therefore not powerful enough for use in air transportation. Instead, the authors’ plasma jet thruster generates the high-temperature, high-pressure plasma in situ using only injected air and electricity.

Their experimental setup included a magnetron with the power of 1 kW at 2.45 GHz, a circulator, a flattened waveguide, an igniter, and a quartz tube. The magnetron is the microwave source, the circulator is used to absorb reflected microwaves, and a three-stub tuner is used to optimize the power inside the air ionization chamber. 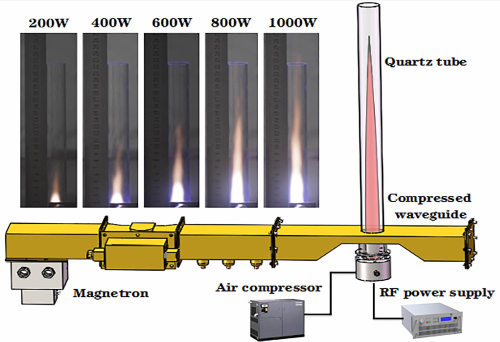 A schematic diagram of a prototype microwave air plasma thruster and the images of the bright plasma jet at different microwave powers. This device consists of a microwave power supply, an air compressor, a compressed microwave waveguide and a flame ignitor. Credit: Jau Tang and Jun Li.

The prototype plasma jet device can lift a 1-kilogram steel ball over a 24-millimeter diameter quartz tube, where the high-pressure air is converted into a plasma jet by passing through a microwave ionization chamber. To scale, the corresponding thrusting pressure is comparable to a commercial airplane jet engine.

By building a large array of these thrusters with high-power microwave sources, the prototype design can be scaled up to a full-sized jet. The authors are working on improving the efficiency of the device toward this goal.

Our results demonstrated that such a jet engine based on microwave air plasma can be a potentially viable alternative to the conventional fossil fuel jet engine.

If you already have electricity available on an airplane, why not just use it to drive an electric motor in a high bypass turbofan configuration? In some jet engines today, about 90 percent of the thrust comes from the fan and only a little from the core jet engine. This is how model "jet" airplanes work, with an electric motor core and bypass fans. Today electric motors are available with 3 hp per pound of weight, and 12 hp per pound is being perfected in the UK. See https://www.flyingmag.com/aircraft/siemens-unveils-260-kw-electric-aircraft-motor/ (this has since been sold to Rolls Royce) and https://drivesncontrols.com/news/fullstory.php/aid/6277/UK_project_aims_for__91world_92s_most_power-dense_PM_motor_92.html

Put a megawatt motor behind the front fan driven by a small turbine.
Plenty of power to climb and fuel efficient cruising at altitude.

With electricity supplied by Li ion batteries weighing ~ 1.0kg per 250 Wh of rated capacity, of which ~20% must be retained as an unused reserve, the key question apparently remains one of how to store, or generate, sufficient power for prolonged flight. To quantify this problem it can be seen that current batteries to supply 800kWhs would weigh ~ 4.0 tonnes.

The Wuhan research doesn't mention the level of power required for its plasma drive when scaled up to equal the output of a normal plane's jet engine, which presumably indicates that it is not low enough to resolve the power supply question. Is this correct ?

Batteries with better p/w ratios will no doubt be developed, but it is unclear to me how soon that might provide an affordable solution, or how that compares with a solution being found via a sustainable biofuel-cell approach (e.g. Native Coppice Forestry for charcoal + methanol [CH3OH] with the latter reformed on board and used in a high efficiency fuel cell).

There is an old laser driven fusion concept that is looking promising with new lasers. The fusion energy directly produces electricity. Now imagine that the two are combined to create a "simple" air vehicle with incredible range and hypervelocity.