This summer, the Mercedes-Benz E-Class will introduce a new, comprehensively digitalized generation of steering wheel: the capacitive steering wheel.

The rim contains a two-zone sensor mat that detects whether the driver’s hands are gripping the steering wheel. The touch control buttons placed in the spokes also work with digital signals. 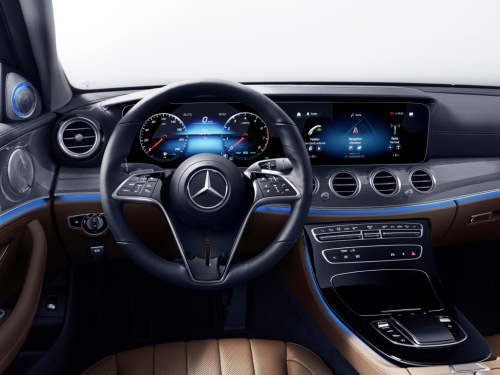 The first step towards the modern Mercedes-Benz steering wheel was taken by the then Daimler-Motoren-Gesellschaft 120 years ago: switching from a simple steering crank or steering rod to the significantly more functional steering wheel. This led to the development of today’s high-tech command center, which enables the driver to steer precisely and, at the same time, comfortably and safely operate numerous comfort and assistance systems.

Steering-wheel design is a world of its own and a very special challenge that is often underestimated. Besides the seat, the steering wheel is the only component in the vehicle with which we have intensive physical contact. The fingertips feel little things that we normally don’t notice. If an unevenness is disturbing or the steering wheel does not fit snugly in our hands, we don’t like it. This haptic sensation is sent to the brain as feedback and determines whether or not we like the car.

The first automobile in the world, the patent motor car by Carl Benz of 1886, still managed “without,” just like the “steel wheel car” designed by Gottlieb Daimler and Wilhelm Maybach in 1889—neither of them had a steering wheel. They were only equipped with a simple steering lever or steering crank because at the time, carriage drivers were used to pulling on the right or left rein to direct the horses in the desired direction.

The French engineer Alfred Vacheron is considered the inventor of the steering wheel. For the world’s first automobile race—from Paris to Rouen in July 1894—he had installed a steering wheel instead of the usual steering lever in his Panhard & Levassor, which was powered by a Daimler engine. He achieved better control because the steering movement of the front wheels could be distributed over several turns of the steering column from a neutral central position until it stopped. This enabled more precise steering and thus higher driving speeds. Although the Frenchman placed only 11th, the steering wheel prevailed.

In 1900, Daimler-Motoren-Gesellschaft also equipped its Phoenix racing car with a steering wheel. In this case the steering column was tilted, which made it much easier to operate. Nevertheless, every steering movement required a great deal of effort. In the Mercedes Simplex models introduced in 1902, there were additional levers on the steering wheel which had to be used to regulate essential engine functions such as ignition timing and air/fuel mixture. 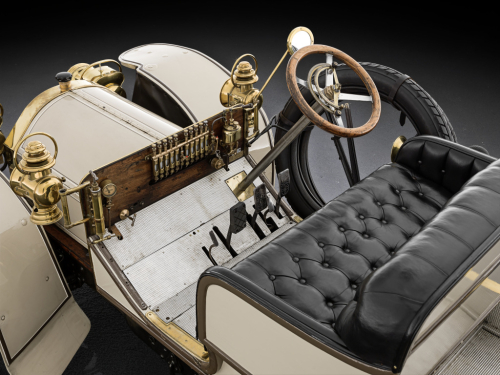 While the levers for the manual adjustment of the fuel mixture and ignition gradually became superfluous thanks to further development of the engines, an additional function from the early days of the car has remained until today: the horn. The simplest form of car-to-x communication began with a bulb horn mounted on the steering wheel rim, followed by the klaxon horn button on the steering wheel hub. The horn ring on the steering wheel spokes made its debut in the 1920s. It was standard until the 1970s and became increasingly more delicate.

In 1949, the horn ring also took over the function of actuating the turn signals or the indicators that were common until the mid-1950s. To turn, it was simply turned to the left or right. Then an approximately 20-centimeter-long indicator arm swung sideways out of the body and indicated the direction of travel. These direction indicators, which seem bizarre from today’s perspective, were replaced by orange-yellow flashing lights which were activated by turning the ring via a central control unit.

In the 1950s, the steering wheel became even more of a central interface between car and driver as a control center for new comfort functions and greater safety. In 1951, Mercedes-Benz introduced a gearshift on the steering column in the 300 “Adenauer-Mercedes” (W 186) and in the 220 (W 187), which was a gain in comfort for driver and front passenger. This was because at that time, the front seats usually consisted of a continuous bench which could accommodate up to two co-drivers.

Until the 1970s, the gearshift lever on the steering column remained a widespread method of operating the transmission. At Mercedes-Benz, it returned in 2005 with the DIRECT SELECT automatic selector lever, which freed up the center console for other purposes. Another steering wheel function was added in 1955 with a lever for the headlamp flasher. The steering itself, however, was often exhausting, despite the large steering ratio and the protruding steering wheel diameter. For this reason, Mercedes-Benz introduced power steering in 1958 in the 300.

In 1959, Mercedes-Benz revolutionized automotive engineering, particularly in terms of accident protection, with the “Fintail” (W 111). This vehicle was the world’s first to feature an integrated safety concept consisting of a stable passenger cell, crumple zones, a new safety steering wheel with a large, deformable baffle plate which reduced the risk of injury in the event of a collision, and a split steering column which was offset to the rear. 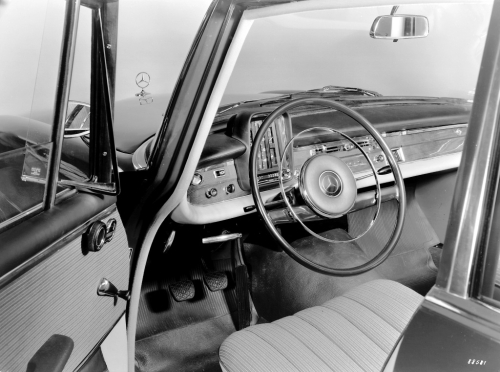 This made it possible to avoid the “lance effect”. In earlier vehicles with a rigid steering column, serious injuries occurred repeatedly because the steering column pushed towards the driver in a frontal impact. To further increase safety, Mercedes-Benz introduced a patented safety steering system with a telescopic steering column and impact absorber, which became standard on the entire passenger car range in 1967.

In addition, the first combined lever made its debut in 1959 in the “Fintail” and “Ponton”. Following the motto “two for one,” it included the indicator and headlight flasher functions. In 1963, the lever was extended to include the windscreen wipers and windscreen washer system functions. The windshield wiper was previously activated with a pull switch on top of the instrument panel.

The four-spoke safety steering wheel introduced with the 350 SL Roadster in 1971 provided even better impact protection thanks to a wide padded plate with impact absorber. The spokes served as supports for the rim. In the event of a collision, they absorbed the forces and transmitted them in such a way that the steering wheel rim could not break. The horn ring had already had its day, and the buttons for the horn were moved back to the center of the steering wheel.

In December 1975, the Mercedes-Benz 450 SEL 6.9 was one of the first automobiles to be equipped with a cruise control system as standard. The world’s first radar-supported DISTRONIC proximity control system, which maintains a constant distance to the vehicle in front, had its world premiere in 1998, also in the S-Class (220 series).

The further pursuit of the best possible safety led to another decisive change in the steering wheel design from 1981 onwards. The reason for this was the introduction of the first driver airbag in the S-Class (126 series). Hidden behind the protruding baffle plate was a new restraint system, which offered a safety standard never before achieved in the event of a collision.

In 1992, the driver airbag became standard equipment on all Mercedes-Benz passenger car models. The passenger airbag followed in 1994. The airbag inflates to a diameter of 720 millimeters and a volume of 64 liters within 30 milliseconds on impact.

Another technical revolution was embodied by the multifunction steering wheel, which was introduced in 1998 together with the COMAND (Cockpit Management and Data) system. It was not only the multitude of vehicle functions, but also the advance of new devices for information, navigation and entertainment that required a rethink of the vehicle operation and its display concept. An important goal in the development of the S-Class 220 model series was to relieve the driver of enough work so that he could concentrate on the essentials: the traffic situation and the driving experience. With a new, standard multifunction steering wheel, the driver was able to control many systems and could call up important information at the touch of a thumb. For the first time, the steering wheel was coupled with a car radio, car phone and a display in the middle of the instrument cluster on which up to eight main menus appeared.

2005 saw the debut of the then new models of the M-Class and S-Class with redesigned cockpits: the automatic selector lever moved from the center console to the steering column. The new DIRECT SELECT gearshift created space between the driver and front passenger and made operation even easier. Additional steering wheel gearshift buttons enabled the manual preselection of the seven gears; the performance of the six- and eight-cylinder engines could now be optimally exploited in every driving situation. From 2008, the SL Roadster was available with the 7G-TRONIC sports transmission with steering wheel gearshift paddles.

With the new functions, more and more cables, circuit boards and sensors found their way into the steering wheel. To accommodate them and the airbag, the steering wheels were rather bulky in the 2000s. In the course of time the design became more and more refined. From the initial polygonal shapes, geometric forms with a circle in the middle and flowing spoke shapes developed.

The 2016 E-Class was the first car in the world to feature Touch Control buttons on the steering wheel. They allow the entire infotainment system to be controlled by finger swiping—without having to take your hands off the steering wheel. Like the surface of a smartphone, the buttons are touch-sensitive and therefore react to horizontal and vertical swiping movements of a finger. This allows the driver to control all the infotainment system's functions simply, logically and intuitively. Pressing the touch control buttons triggers the function selected with swiping gestures. A further four buttons per switch panel are assigned familiar functions such as volume control and telephone control.

The sensors on the front and back of the rim register whether the steering wheel is being held. No more steering movement is required to signal the assistance systems that the vehicle is under control.

The Touch Control buttons integrated into the steering wheel spokes now also function capacitively. This reduces the mechanical operating surfaces to a maximum. The seamless control panels, which are divided into several functional areas, are precisely integrated flush with the spokes.

As with a smartphone, touches are recorded and evaluated via capacitive sensor technology, which enables intuitive operation via swiping gestures and pressing of familiar symbols. The high-quality materials have been selected in such a way that operation is possible even in an interior heated up by sunlight.

The system automatically recognizes where the finger is at any given moment. And the buttons are designed for temperatures of over 100 degrees Celsius.

The steering wheel is available in three versions: “Sport,” “Luxury” and “Supersport.”

The steering wheel rim is the secret kingmaker of a steering wheel. Its geometric design is a science in itself that cannot be found in any textbook. The wreath must fit snugly in the hand. If it is a millimeter too much, it feels unpleasantly bulging. If it’s a millimeter too little, it feels like it’s starved. And that impression then clouds the overall feel of the car.

It would be great to get the same presentation with images or film clips.
It is fascinating, and is a great story, but it needs images for maximum impact.