While there is global potential to generate renewable energy at costs already competitive with fossil fuels, a means of storing and transporting this energy at a very large scale is a roadblock to large-scale investment, development and deployment. Ammonia produced from renewables can be a viable liquid fuel replacement for many current-day uses of fossil fuels, including as a shipping bunker fuel; as a diesel substitute in transportation; as a replacement fuel in power turbines; and even as a potential jet fuel. The global transportation of ammonia by pipeline and bulk carrier is already a well-developed technology.

Researchers at Monash University in Australia are proposing a roadmap to renewable ammonia being produced in the future at a scale that is significant in terms of global fossil fuel use. This, they suggest in a paper in Joule, will emerge via three overlapping technology generations: 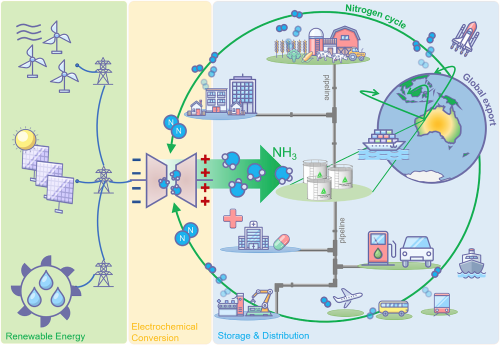 Just over a century ago, the discoveries by Haber and Bosch made possible the industrial production of ammonia and ammonia-based fertilizers that today feed the world and are the source of most of our nitrogen-containing chemicals, materials, and pharmaceuticals. The process generates H2 from natural gas or coal through steam reforming and combines it with N2, which has been separated from air by a cryogenic process, to form NH3.

The reaction between N2 and H2 requires temperatures in excess of 400 ˚C and pressures above 200 bar to be facile, and therefore the capital cost of plant and equipment is substantial. Ammonia production is currently responsible for ~1.0% of global greenhouse gas emissions (or about 1.4% of global CO2 emissions); these values increase further if CO2 emissions associated with natural gas extraction are included.

Over the last decade, momentum has been building to transform the Haber- Bosch (H-B) ammonia industry toward renewable sources of hydrogen, for example, from water electrolysis or solar thermal cycles. This goal has provided the background to the broader vision of ammonia becoming a transportable store of renewable energy that we will discuss in this paper. The challenge both for the existing industry, as well as a much-expanded renewable energy industry is, of course, economics.

Generation 1. Gen 1 involves the use of carbon sequestration or offsets to bring the net carbon impact of the ammonia production to zero (blue ammonia). Carbon sequestration adds cost and plant complexity on top of the existing H-B technology. For this reason, the researchers said, it is likely to represent only a transitional solution, helping to establish a market for ammonia beyond the fertilizer and chemical industries.

Modern H-B plants produce ammonia at an energy cost of at least 8 MWh tonne-1. Recognizing that the lower heating value (LHV) of ammonia is 5.2 MWh tonne-1, this represents an energy efficiency of only 65%.

Generation 2. Gen 2 renewable ammonia is produced from H-B technology but employs renewable, rather than fossil-fuel-sourced, hydrogen. This has the advantage that existing H-B plants can be transitioned to this new hydrogen supply without major disruption or mothballing. Powered by fully renewable electricity derived from a 20 kW wind turbine, a Siemens demonstrator produces H2, using a proton exchange membrane (PEM) water electrolyzer, to form around 30 kg NH3 daily.

Gen 2 technology has significant long-term scope in terms of the ammonia economy, limited only by the substantial investment and long lead time required to establish new facilities.

Generation 3. Gen 3 technology is based on the electroreduction of N2 to ammonia by direct or mediated means. The H-B process is no longer required; instead, the reaction is driven by electrochemical reduction and the H source is water.

There are several modes of this process being actively researched: 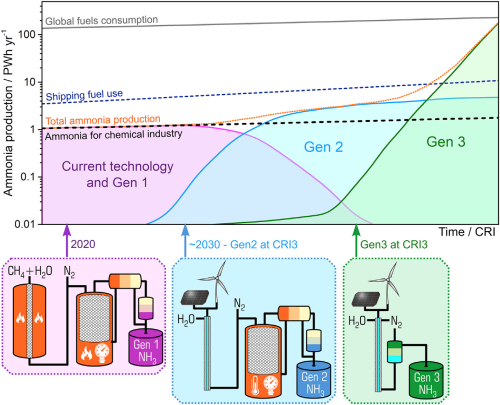