The Department of the Interior (Department) and the Bureau of Land Management (BLM) have approved a proposal to construct and operate the largest solar project in United States history. US Secretary of the Interior David L. Bernhardt signed the Record of Decision (ROD) for Solar Partners XI, LLC to construct a 690-MW photovoltaic solar electric generating facility and ancillary facilities about 30 miles northeast of Las Vegas.

The estimated $1-billion Gemini Solar Project could be the eighth-largest solar power facility in the world when finished and is expected to generate enough electricity to power 260,000 homes in the Las Vegas area and potential energy markets in Southern California. 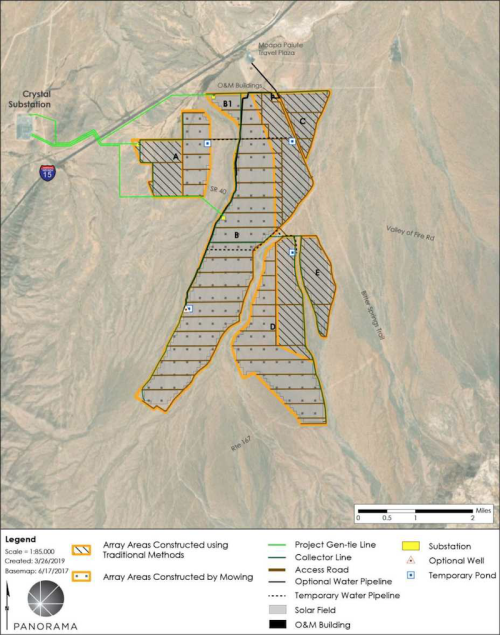 Map of the approved project alternative.

The project also includes a 380 MW solar-powered battery system able to store and deploy more than 1,400 megawatt hours which can be used when the power is needed most.

The project is expected to be constructed in two phases. The first phase of power could come on-line in 2021 with final completion as early as 2022. Federal revenues are expected to be more than $3 million annually to the US Treasury.

The project is expected to generate renewable electricity that would annually offset greenhouse emissions of about 83,000 cars (384,000 metric tons of carbon dioxide equivalent). The hybrid alternative specified in the ROD also includes a mowing method that will result in fewer impacts on native vegetation and wildlife, such as the desert tortoise. Extensive long-term monitoring will be required, in addition to possible adaptation of methods used to reduce potential impacts to desert tortoise.

The BLM and Solar Partners XI, LLC also developed measures to avoid, minimize and mitigate impacts to other resources including, but not limited to, visual resources, cultural and tribal resources, recreation access and air quality.

The Secretary signed the ROD after the BLM facilitated a public process that included two public meetings during a 45-day public scoping period and two additional public meetings during the 90-day public comment period after the Draft Resource Management Plan Amendment (RMPA) and Draft Environmental Impact Statement (EIS) were released. The BLM responded to all substantive comments that it received on the Draft RMPA/Draft EIS, as well as protests on the proposed RMPA and input it received from the Governor’s office. The BLM also conducted government-to-government consultations over several months, traveling to and meeting with the following Tribes: Moapa Band of Paiutes, Las Vegas Paiute Tribe, Fort Mojave Tribe, Twenty-Nine Palms Band of Mission Indians, Chemehuevi Indian Tribe, Bishop Paiute Tribe, Colorado River Indian Tribes and the Timbisha Shoshone Tribe.

Am I missing something?

The $3M/year figure looks to me like the cost of leasing the land from the Feds, so it would be added to the project cost to the investors if I'm reading this right. The utility/Solar Partners ROI isn't mentioned in the article.

@ mahonj
Your calculation is exceedingly optimistic. The quoted 690 MW is the peak power rating of the system which will never be achieved during transition of sunrise and sunset. The 3000 hrs. definitely lack max. sunlight radiation over a complete day.