A new World Bank Group report finds that the production of minerals, such as graphite, lithium and cobalt, could increase by nearly 500% by 2050, to meet the growing demand for clean energy technologies.

It estimates that more than 3 billion tons of minerals and metals will be needed to deploy wind, solar and geothermal power, as well as energy storage, to achieve greenhouse gas emission reductions sufficient to achieve a below 2°C future. 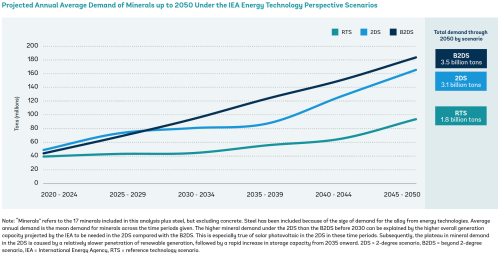 Source: “Minerals for Climate Action: The Mineral Intensity of the Clean Energy Transition”

Low-carbon technologies, particularly solar photovoltaic (PV), wind, and geothermal, are more mineral intensive relative to fossil fuel technologies. For example, about 3,000 solar panels are needed for 1 megawatt (MW) of capacity of solar PV; this means that a 200 MW solar PV project could be as big as 550 American football fields. Under a 2-degree scenario (2DS), production of graphite, lithium, and cobalt will need to be significantly ramped up by more than 450 percent by 2050—from 2018 levels—to meet demand from energy storage technologies.

Though demand for some base minerals, like aluminum and copper, appears to be smaller in percentage terms, their absolute production figures are significant, at 103 million tons and 29 million tons by 2050, respectively. These projections do not include the associated infrastructure needed to support the deployment of these technologies (for example, transmission lines) or the physical parts (like the chassis of newly built electric vehicles). Because of the material intensity of low-carbon technologies, any potential shortages in mineral supply could impact the speed and scale at which certain technologies may be deployed globally.

—“Minerals for Climate Action: The Mineral Intensity of the Clean Energy Transition”

The report “Minerals for Climate Action: The Mineral Intensity of the Clean Energy Transition” also finds that even though clean energy technologies will require more minerals, the carbon footprint of their production—from extraction to end use—will account for only 6% of the greenhouse gas emissions generated by fossil fuel technologies.

The report underscores the important role that recycling and reuse of minerals will play in meeting increasing mineral demand. It also notes that even if we scale up recycling rates for minerals such as copper and aluminum by 100%, recycling and reuse would still not be enough to meet the demand for renewable energy technologies and energy storage.

In the current global context, COVID-19 is causing major disruptions to the mining industry across the world. In addition, developing countries that rely on minerals are missing out on essential fiscal revenues and, as their economies start to reopen, they will need to strengthen their commitment to climate-smart mining principles and mitigate any negative impacts.

COVID-19 could represent an additional risk to sustainable mining, making the commitment of governments and companies to climate-smart practices more important than ever before. This new report builds on the World Bank’s long-standing expertise in supporting the clean energy transition and provides a data-driven tool for understanding how this shift will impact future mineral demand.

The report notes that some minerals, such as copper and molybdenum, will be used in a range of technologies, while others, such as graphite and lithium, may be needed for just one technology: battery storage. This means that any changes in clean energy technology deployments could have significant consequences on demand for certain minerals.

The report is designed to help governments, especially resource-rich developing countries, the private sector and civil society organizations (CSOs), understand how the clean energy transition will impact future mineral demand. It is part of the joint World Bank-IFC Climate-Smart Mining initiative and builds upon the World Bank’s 2017 report “The Growing Role of Minerals and Metals for a Low-Carbon Future.”