In the first quarter of 2020, the electrically-chargeable vehicle segment in Europe significantly increased its market share, rising to 6.8% (from 2.5% in Q1 2019) against the backdrop of the overall decline in passenger car registrations due to the COVID-19 outbreak. By contrast, demand for diesel and gasoline vehicles tumbled dramatically, although gasoline-powered cars still account for more than half of the EU market, according to the European Association of Automobile Manufacturers (ACEA). 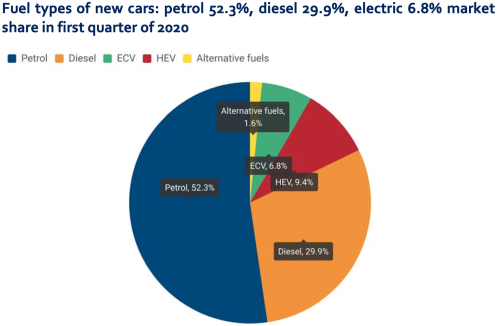 With the vast majority of European dealerships closed in March as a result of the containment measures, demand for gasoline cars also plummeted. Gasoline vehicle sales contracted by 32.2%, from almost 2 million units last year to 1.3 million in Q1 2020. With the exception of Cyprus and Lithuania, all EU markets have faced double-digit drops so far this year.

Alternatively-powered vehicles (APV). From January to March 2020, electrically-chargeable vehicles (ECV) substantially benefited from the decline in diesel and gasoline demand. ECV sales more than doubled (+100.7%) in the first three months of the year, totalling 167,132 cars registered across the EU. Both the battery-electric (BEV) and plug-in hybrid (PHEV) segments provided a strong boost to this growth (+68.4 and +161.7% respectively).

Hybrid electric vehicles (HEV) remained the best-sellers of the alternatively-powered vehicle segment, representing 9.4% of the total EU car market. 232,525 units were registered during the first quarter of the year (+45.1% compared to 2019).

Alternative fuels—which include those vehicles running on ethanol (E85), liquid petroleum gas (LPG) and natural gas (NGV)—had mixed performances. Demand for NGV cars strongly increased (+68.5%), while LPG registrations halved due to the contraction in the Italian market. Growth in the natural gas segment did not offset the drop in LPG, resulting in an overall decline of 30.4%

The four major markets all posted growth in total APV registrations from January to March this year. Germany and France stood out with demand increasing by 74.9% and 71.7% respectively, boosted by the outstanding performance of the plug-in hybrid segment.

I think that in this world of technology no one wants to have the un-rechargeable vehicles and things with bad reviews therefore students prefer to visit https://britishessays.net/gradesfixer-review/ website to read authentic reviews about gradefixer. People want to know that what the benefit of taking rechargeable vehicles is. So in this time people try to use those vehicles which increase its market value.