In the production of battery (spherical) graphite for the lithium-ion battery market up to 50% of the initial graphite feedstock reports as fines. The ability to further process this low-value byproduct and then to sell it as a high value product adds significant further value to the processing economics for production of battery (spherical) graphite using the EcoGraf proprietary nonhydrofluoric purification process.

Typically, the value of the by-product fines is very low, but based on current market prices for equivalent products, EcoGraf expects significantly higher prices of up to €$2,000/tonne for the value-added fines.

This achievement has culminated from an extensive 18 months qualification process in which EcoGraf’s product samples were evaluated by European customers. The confirmation by customers provides the basis for entering sales arrangements for the value-added fines.

Market opportunities for this high purity fine graphite product are also being pursued in Australia. Initial discussions have focused on utilizing graphite’s unique properties in areas such as flame retardancy and thermal conductivity. The Kwinana facility will be the first of its kind to be constructed outside of China and will provide a new supply of high quality and cost competitive purified spherical graphite for the lithium-ion battery market. 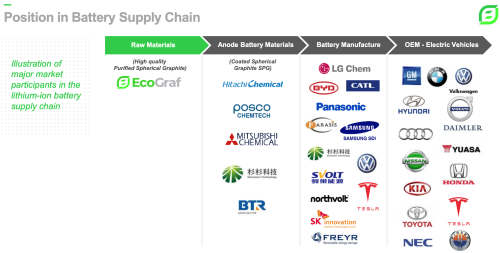 In March, EcoGraf reported that it successfully trialed its proprietary graphite purification technology to recycle lithium-ion battery anode material in Germany, with the EcoGraf process increasing the carbon purity of the recycled material by over 200% and achieving a carbon content of over 99%.

The EcoGraf purification process was tested on recycled material extracted from lithium-ion batteries, which included anode material which consists of natural battery graphite, synthetic graphite and silicon. As graphite represents almost 50% of the mass of a typical lithium-ion battery, the successful trial represented a major step forward to support sustainable, closed-loop manufacturing processes, the company said.

Posted on 13 May 2020 in Batteries, Manufacturing, Materials | Permalink | Comments (2)

Graphite is still the material of choice for lithium ion battery anodes.