The research team’s projections show that the amount of urban land on Earth by 2100 could range from about 1.1 million to 3.6 million km2 across five scenarios (roughly 1.8–5.9 times the global total urban area of about 0.6 million km2 in 2000). Their open-access paper is published in the journal Nature Communications.

Under the middle of the road scenario, new urban land development amounts to more than 1.6 million km2 globally, an area 4.5 times the size of Germany. Global per capita urban land more than doubles from 100 m2 in 2000 to 246 m2 in 2100. 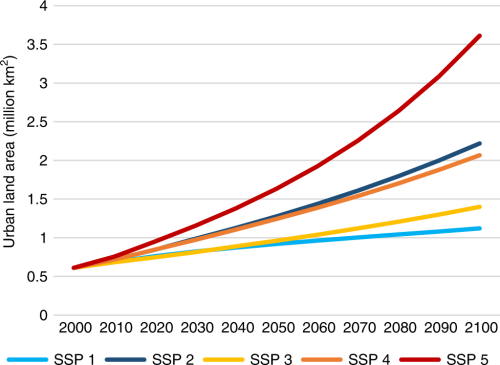 Jing Gao, an assistant professor of geography and spatial sciences in UD’s College of Earth, Ocean and Environment, and collaborator Brian O’Neill, a UD alumnus and professor from the University of Denver, used data science to analyze 15 global data sets depicting various aspects of urbanization, including a newly available global map series showing urban land change over the past 40 years based on satellite images of Earth.

The global maps are accurate to within approximately 125 feet (38 meters) and provide a uniquely detailed look at past urban development that was not previously possible with this degree of specificity.

The researchers divided the world into 375 small regions and ran a unique model for each region simultaneously, then pieced results from all models together to develop a global map.

How this urban expansion occurs, however, largely depends on societal trends in the years to come. This includes trends in economic growth, population change and lifestyle habits, and what level of consideration is given to how our habits affect the environment.

For both developed and developing countries—for example, countries in Europe and Southeast Asia—urban expansion is expected to roughly triple if society favors materialistic and fossil-fuel driven development instead of adopting a sustainability mindset.

In the US, the least urban expansion occurs if people are focused on sustainability, such as green development and environmental awareness. In this case, urban land is expected to grow by 1.3 times by 2100. But if people favor highly materialistic development over the same timeframe, with high consumption of fossil fuels and a material-driven society, sprawl-like urban expansion is expected, with close to four times the amount of expansion the US had at the beginning of the century.

The US already is among the countries with the largest amount of developed land, so four-fold growth in urban expansion is significant.