The California Energy Commission (CEC) awarded $7.8 to two lithium recovery projects. Uniquely high concentrations of the dissolved soft metal are found in the brine produced by the state’s geothermal hotspots.

The Salton Sea Known Geothermal Area contains an estimated six million tons of recoverable lithium within presently available geothermal resources. Yet, significant barriers stand in the way of accessing this abundant resource and using it to achieve many of the state’s statutory energy goals, including increasing the value of geothermal resources to California’s electricity system. 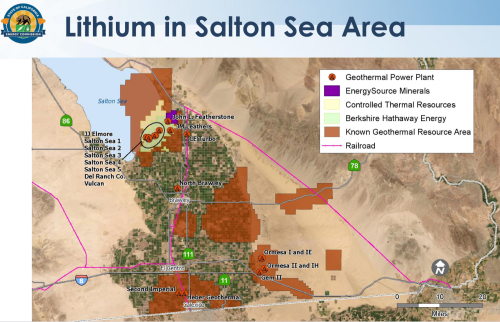 The new lithium recovery projects awarded funding are designed to help reduce costs and environmental impact. They include:

In recent years the global demand for lithium has increased significantly as clean energy resources rapidly replace fossil fuels in the transportation, building, and energy sectors.

California’s vast lithium deposits—as much as one third of the world’s current lithium demand according to some industry estimates—are also seen as a way to propel the state’s green economy. Deposits in the Imperial Valley alone could potentially produce up to $860 million annually in revenues, according to the US Department of Energy’s National Renewable Energy Laboratory.

In February, the California Energy Commission (CEC) and the Governor’s Office of Business and Economic Development (GO-Biz), jointly hosted a symposium facilitating presentations and panel discussions on lithium recovery from geothermal brine in California.

The theme for this symposium was introducing California’s “Lithium Valley” vision of establishing a world-class lithium industry in the state. A focus is advancing California’s unique opportunity to recover lithium from geothermal brine in support of California’s clean energy future.

Posted on 14 May 2020 in Batteries, Geothermal, Manufacturing, Materials | Permalink | Comments (4)

California and Nevada are Lithium rich. The demand for lithium batteries will drive the demand for developing sustainable clean energy; The new oil so to speak.

If we can mine enough in the U.S. for 1 million EVs each year for decades
we will really have it.