Researchers at the National Renewable Energy Laboratory (NREL) are evaluating the use of blockchain for transactive energy using hardware in the laboratory’s Energy Systems Integration Facility (ESIF).

Distributing grid operational decision-making is revolutionary. It’s really like somebody in the 1980s expounding on the economic opportunity of the Internet. Everyone would have laughed at you. That’s kind of what’s happening right now with blockchain applications—the foundational tools for another technology revolution are emerging, and this could be one of them.

—Dane Christensen, a mechanical engineer in NREL’s Residential Buildings Research Group and a principal investigator on a blockchain pilot project

Blockchain serves as a distributed digital record of actions agreed and performed by multiple parties. Blockchain’s primary value is providing mathematical proof about the state of data, so that different parties to a transaction can agree on the outcome even if they do not know or trust each other. Though commonly associated with cryptocurrencies such as Bitcoin, blockchain technology can be used with virtually any type of transaction involving digital ownership in real time. These technologies rely on established cryptography and consensus mechanisms to ensure transactions remain secure, and an entire industry has emerged to apply blockchain technology in resolving real-world challenges.

Potential opportunities abound for the use of blockchain in the energy sector. The Congressional Research Service last year noted increasing interest among producers of distributed energy resources (DERs)—such as rooftop solar—to sell electricity to neighbors. Congress’ public policy research arm predicted that if this approach proves “practical and economical, blockchain technology could alter the manner in which electricity customers and producers interact.”

Today, utilities use complex software platforms called an energy management system (EMS) and advanced distribution management system (ADMS) to manage the demand, supply, and reliable delivery of electricity on the power grid. But it is difficult to scale EMS and ADMS to interoperate transactions between thousands of homes, let alone the millions of connected devices in use in those homes.

When you have hundreds of thousands or millions of devices out there that want to interact, you face a significant trust challenge. Trust between devices can only be achieved through methods that verify and enable proof that each system does what it said it was going to do. With blockchain, we may have a path to achieve secure, trusted communications between players without a need for central control. 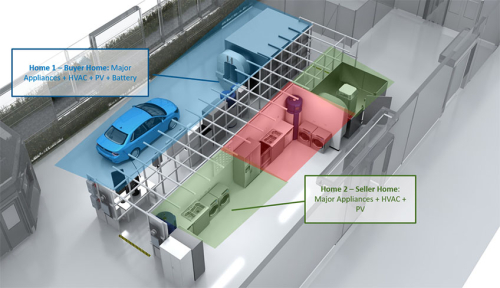 NREL researchers conducted experiments to learn what could happen when two homes were connected via a blockchain with the ability for one to sell excess solar power to another. This required two blockchain transactions: a secure transmission of data about the amount of energy generated, and a payment to the seller.

Central to this research is an NREL-developed software solution called foresee. As a secure home automation system, foresee coordinates the operation of connected appliances, home batteries, and rooftop solar, satisfying homeowner values and preferences along with utility grid needs.

In the blockchain experiment, foresee alerted the second home when it would be cheaper to buy renewable energy from its neighbor rather than paying the utility’s charges, then used a digital currency to complete the transaction. The demonstration showed the ability to automatically match energy generation and demand between these two homes.

The results highlighted the path for future research. Notably, Dylan Cutler, principal investigator on the project, pointed out, the use of blockchain in the energy markets will require an examination of grid reliability and resiliency and cybersecurity concerns. One area Cutler’s initial research did not consider was the role a utility would play in peer-to-peer energy transactions, and that is something he said a future study must consider.

Cutler, a senior researcher in NREL’s Integrated Applications Center, said the emergence of blockchain technology requires a newly designed market. While the common assumption of blockchain is the end user holds sway over the distributed control of energy, in reality it is likely that electric power utilities will at minimum be responsible for coordinating these neighborly transactions.

NREL is building on this work to study the benefits for building owners and utilities. Using a blockchain-based market technology, the research centers on the operation of the electrical grid as homes and businesses continue to adopt rooftop solar generation, battery storage, electric vehicles, and smart appliances. The laboratory’s partners are Exelon Corporation, a utility based in Chicago, and Energy Web Foundation, which develops open source blockchain software solutions.

Christensen and Sivasathya Pradha Balamurugan, NREL’s co-principal investigators on the project, said the use of blockchain would allow increased coordination between utilities and customers to achieve mutual benefits. Electricity generated from renewable resources such as solar and wind that customers cannot use can be diverted to the grid, but there are limits. Feeders—which carry voltage from a substation to transformers—were not designed for the bidirectional flow of electricity.

There will soon be feeders in the US where if you plug in one more electric car, you could damage transformers or activate safety cutoffs because we’re reaching the limits of the capacity of the distribution grid. Utilities are very interested in how to manage electric service without having to up-size all the grid equipment. Coordination of buildings’ energy use is a way to keep costs down, make better use of distributed generation, and improve reliability of the power grid.

Using NREL’s ESIF systems, the research team is examining how blockchain-based energy markets can allow buildings to coordinate within a distribution feeder, under appropriate constraints defined by the utility. In particular, the team will explore how a blockchain-based approach to digital identity can help utilities verify the attributes and the operations of distributed energy resources in their territory.

The project goal is to allow high levels of solar and flexible loads to be installed in buildings, while eliminating the occurrence of energy backfeed into the bulk power grid. If successful, this will allow building owners and utilities to work together to accelerate adoption of advanced energy technologies. It may also unlock new opportunities for customers with solar or storage assets to earn money or lower their bills by providing grid services.

By relying on blockchain, Christensen said, utilities could integrate many different types of DER with core operational tools (such as EMS and ADMS software) securely and efficiently.

Traditionally, integrating new resources into the grid comes at a substantial cost for a utility. A large part of that cost is driven by custom and manual processes for different DER types. Every feeder is different. Every home is different. As more renewables are adopted, as more electric vehicles are adopted, continuous expert engineering has to be done.

The engineering to ensure one feeder operates efficiently and effectively in balancing supply and demand does not necessarily translate to another feeder. “What blockchain allows,” Christensen said, “is a scalable solution that you can easily set up on another feeder because it can be self-customizing.”

NREL and Exelon said a utility can use the findings of the new blockchain research to make a case for allowing a pilot project.

BLOSEM. NREL has also embarked on a two-year effort with other national laboratories to accelerate the use of blockchain in the energy sector. A new collaborative effort called Blockchain for Optimized Security and Energy Management (BLOSEM) intends to develop the architecture and infrastructure so that utilities can safely explore the technology.

NREL’s initial role in BLOSEM expands on the laboratory’s previous accomplishments, with additional simulations planned to expand the use of blockchain. The National Energy Technology Laboratory is the lead organization on the project, with Ames Laboratory, SLAC National Accelerator Laboratory, and Pacific Northwest National Laboratory also part of the research team. The Grid Modernization Laboratory Consortium is funding BLOSEM. US Department of Energy offices funding this project include the Office of Fossil Energy, Office of Nuclear Energy, and Office of Electricity Delivery and Energy Reliability.

This is an interesting topic - it is more efficient to generate electricity in larger, rather than smaller units, at the simplest level, a 5kW unit supplying 3 homes would be much better than 3x 1.7 kW units each supplying its own home.

This is why, in general, we have the grid and centralised power generation. If you have 100,000 people, demand is predictable, if you have 1 (or 3) it is almost random (I am thinking about cooking, washing and using electric kettles and water heaters here).

I still think it is better to sell power to the grid and let them sort out the complexity of selling it to other people.

However, you can still use blockchain to create virtual PV panels.

Rather than put up your own PV installation, you buy a share in a larger one, say 2 kW of 200 kW.
This would mean that if you consume power while the sun is shining on your solar farm, you can take up to 2kW for free (possibly less a cent or two for transmission).
If you do not need it, you can sell it to the grid at the wholesale rate.
If you need more, you just buy it in the usual way.

This could work for wind as well as solar, in fact, you might want both.

You could also purchase a virtual battery, which would allow you time shift a certain amount of power that you have already generated to the time you want to use it.

Thus, you would have the benefits of generating your own power and being able to use it directly with not having to buy and run a full PV system.

The PV (or wind) developer could offset some of his capital cost up front.

You would need real time signalling to tell you when the sun was shining so that you could turn on a washer (or whatever) and get billed correctly for it.

This could also work well with EV charging.