Scientists at Kyoto University’s Institute for Integrated Cell-Material Sciences (iCeMS) have developed a new coordination polymer glass membrane for hydrogen fuel cells that works just as well as its liquid counterparts with added strength and flexibility. A paper on the work is published in the journal Chemical Science.

PEM hydrogen fuel cells are fed hydrogen and oxygen to produce electricity, with water as their only by-product. These fuel cells contain proton-conducting membranes that facilitate the separation of hydrogen’s positive and negative particles, protons and electrons, a process that ultimately leads to the production of electricity. Protons need to easily move across these membranes for the process to be efficient.

Current proton conducting membranes are made from liquids and cannot operate effectively under dry conditions, making their fabrication complicated and expensive. Scientists are looking for ways to fabricate solid membranes made from water-free electrolytes that provide better mechanical and thermal stability than their liquid counterparts, but are also cost-effective and still conduct protons well.

Proton conductive materials are important components of various electrochemical devices. One of the significant devices is the fuel cell, and the anhydrous proton conductors as electrolyte working at 120–200 °C have long been strongly demanded. In the past decade, a number of studies on the proton conductivity of coordination polymers (CPs) and metal-organic frameworks (MOFs) were reported. The crystalline CP/MOFs have advantages for high proton conductivity because of their tailorable pore and accommodation ability of guest molecules. However, they are intrinsically non-moldable because of crystalline nature, and the grain boundary causes gas leaking and additional resistance in electrolyte layers. The preparation of mechanically stable membranes is one of the bottlenecks of the electrolytes developments.

More recently, liquid and glassy states of CP/MOFs have received attention as moldable amorphous materials. The phase transitions from crystals to liquids and glasses of CP/MOFs provide a choice to use grain boundary-free monolith, which is one promising property for the solid electrolytes. In spite of their potentials, there are still a limited number of reports on proton-conductive CP/MOFs glass, and there is no report of CP/MOFs to satisfy criteria for sufficient proton conductivity (above 10 mS cm−1) under the anhydrous condition. 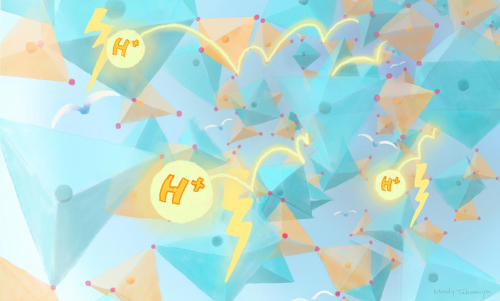 The molecular structure of the new polymer glass facilitated the movement of protons (H+) across it under dry conditions at 120 °C. Credit: Mindy Takamiya/Kyoto University iCeMS

—Satoshi Horike, a materials scientist at iCeMS who led the research 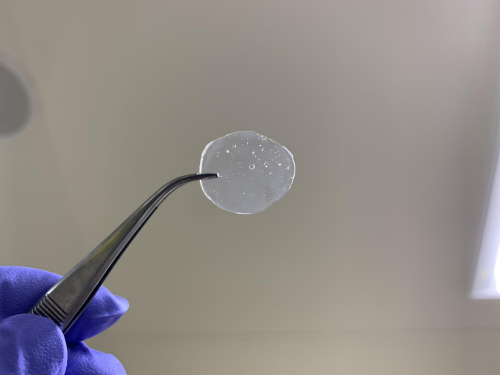 The molecular structure of the coordination polymer glass facilitated the movement of protons across it under dry conditions at 120 °C. When tested in a hydrogen fuel cell, it produced high voltage (0.96 volts), well within the range of typical polymer electrolyte membranes. Its power output was also similar to commonly used Nafion membranes.

Ogawa believes their findings offer an interesting approach for using glass polymers in fuel cell applications. The team plans to continue their work with the aim of achieving fuel cell membranes with higher performance and long-term stability.

Nafion has been used so far.