Professor Yutaka Amao of the Osaka City University Artificial Photosynthesis Research Center and Ryohei Sato, a 1st year Ph.D. student of the Graduate School of Science, have shown that the catalyst formate dehydrogenase reduces carbon dioxide directly to formic acid. Their work, published in a paper in the RSC’s New Journal of Chemistry, points to a catalyst in developing and designing an artificial photosynthesis system that efficiently converts carbon dioxide into organic molecules. 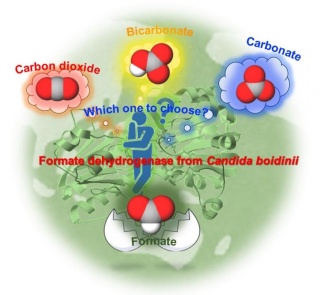 The development of an effective catalyst is an important step in creating an artificial photosynthesis system that uses sunlight to convert carbon dioxide into organic molecules. Formate dehydrogenase (FDH) is a catalyst that accelerates the reaction of converting carbon dioxide into formic acid (hydrogen energy storage medium etc.) However, until now the details of how this happened were unclear. The research group dissolved FDH in a liquid solution and carbon dioxide was then blown into the solution for the reaction event.

Well done Ryohei Sato - not many 1st year PhDs get a mention in GCC!